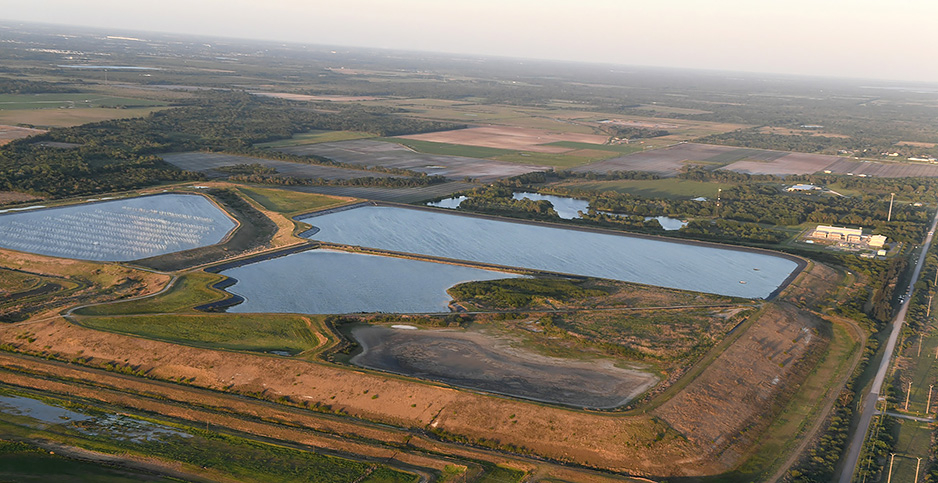 A significant leak was discovered at the old Piney Point phosphate mine in Bradenton, Fla. Tiffany Tompkins/TNS/Newscom

Florida officials are preparing for a potentially disastrous flood around an old Tampa Bay-area phosphate plant that is leaking wastewater from a retention pond.

Controlled releases of about 35 million gallons of water per day since March 30 have been necessary to prevent a complete breach of a reservoir at the Piney Point plant, Republican Gov. Ron DeSantis said at a news conference yesterday.

"What we’re looking at now is trying to prevent and respond to — if need be — a real catastrophic flood situation," DeSantis said.

Acting Manatee County Administrator Scott Hopes said a full breach of about 340 million gallons could result in a 20-foot wall of water engulfing the surrounding community in minutes.

The county has issued an evacuation notice for an area including 316 homes. Drinking water supplies are safe, officials say. About 345 inmates on the first floor of the county jail are also being evacuated due to the flood risk, the Tampa Bay Times reported.

On Saturday, DeSantis declared a state of emergency for Manatee County as well as neighboring Hillsborough and Pinellas counties. The governor, speaking on Easter Sunday, said he has deployed the National Guard to deliver pumps to help reduce water levels in the pond and prevent a total collapse.

The water sits atop an open-air waste pile called a phosphogypsum stack that contains a radioactive byproduct of manufacturing fertilizer. A tear in a plastic liner may be to blame for the leak in the reservoir.

"To be clear, the water being discharged to Port Manatee is not radioactive," DeSantis said. "It is primarily saltwater from the Port Manatee dredge project mixed with legacy process water and stormwater runoff."

He added that water quality monitoring is ongoing. EPA in a tweet said it’s actively monitoring the situation at Piney Point and has deployed an on-scene coordinator.

"While our foremost concern is ensuring the safety of the community, our administration is dedicated to full enforcement of any damages to our state’s resources and holding the company HRK accountable for this event," DeSantis said.

HRK Holdings LLC manages the gypsum stack at the Piney Point plant, which is now closed. A spokesperson for the company could not be reached for comment.

Officials at the news conference said dissolved oxygen, salinity and pH all met water quality standards as of yesterday. The primary concern is phosphorus and nitrogen in the water being discharged, they said.

But Jaclyn Lopez from the Center for Biological Diversity said there needs to be more transparency around the water quality data the state is collecting and noted that EPA has in the past said "process water" contains radium.

The first is water leaking out of the gypstack that has the potential to be radioactive and contain heavy metals. "Some might try to characterize the gypsum stack as slightly radioactive, but there is no known safe level of radioactivity, and that’s precisely why they’re kept in gypstacks, because they’re too radioactive to be ubiquitous in our environment," she said. "But it seems like that concern has been somewhat abated based on the most recent update."

The second point of discharge that concerns Lopez is controlled releases of water that seem to be coming out of a pipe attached to the pond, which appears "Ninja Turtle green."

Exactly how the leak will affect local water quality is unclear, Lopez said.

The site is located in a rural area that flows into Tampa Bay, she said. If those discharges contain high amounts of nutrients, Lopez said, she would expect algal blooms and possibly some kind of fish kill.

Lopez noted that the regulation of phosphogypsum falls under state jurisdiction and that she’s part of a broad coalition of environmental groups calling on EPA to consider regulating phosphogypsum as hazardous waste under the Resource Conservation and Recovery Act and the Toxic Substances Control Act (E&E News PM, Feb. 8).

When asked about a long-term solution for Piney Point, Hopes said that based on conversations with the governor, the plan is not repairing the liner but "depleting" the holding ponds of their contents before filling and capping the ponds.

But Lopez said that step should have been taken years ago, adding that she hopes Florida regulators conduct some type of treatment before discharging the water.

She also emphasized that the disaster unfolding at Piney Point is the result of a long history of the facility being mismanaged, calling it a "cautionary tale" for repurposing or reusing stacks after they’ve been decommissioned. Piney Point, she noted, is used to store contaminated sludge generated from the dredging of Port Manatee, even though the stack was never meant for that purpose.

"The phosphogypsum stack should be closed; it shouldn’t be used as a continued dump site, it was never engineered for that," she said. "Likewise, we have 24 other stacks in Florida, many of them much larger than this one."