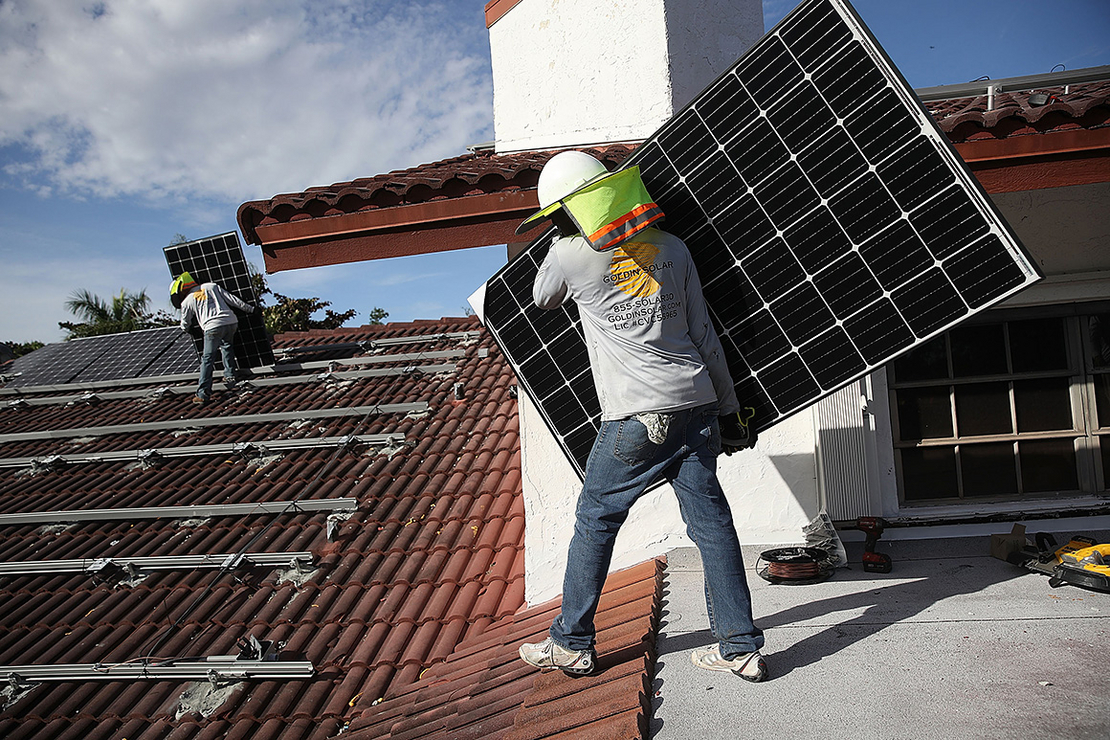 Workers installing a solar panel system on the roof of a home in Palmetto Bay, Fla., in 2018. Joe Raedle/Getty Images

A controversial bill that would slash rooftop solar credits in Florida is headed to the governor’s desk after passing the Legislature yesterday, escalating a yearslong fight between Florida’s politically powerful investor-owned utilities and clean energy advocates.

Gov. Ron DeSantis (R) is expected to sign the bill and give the electric companies a leg up, at least temporarily.

At issue is the amount of money that rooftop solar customers receive when they sell excess electricity to the grid via a policy called net metering. Right now, Floridians enjoy payments set at the retail rate because of a 15-year-old policy designed to develop what was a nascent rooftop industry.

“I’m very concerned about this bill; I think that it could destroy the solar industry,” said state Sen. Lori Berman, a Democrat from Palm Beach County.

But as the nation’s power sector begins to change, electric companies are grappling with how to hang on to their arcane business model while looking for new ways to make money. Rooftop solar stands in the way, they argue.

“It is a regressive policy,” Republican state Sen. Jennifer Bradley said on the Florida Senate floor yesterday, referring to paying the retail rate for solar.

Bradley sponsored the bill, which steps down the current net-metering policy and requires state utility regulators to develop a new policy, which could include allowing the electric companies to tack on additional fees for rooftop solar customers. The measure was heavily supported by the electric companies, which argue that Floridians who do not have solar panels on their roofs subsidize the ones who do. This is because the state’s electric companies still have to provide electricity for solar panel owners when they need it.

“This drives up costs and shifts it to all ratepayers,” said Bradley of the state’s current rooftop solar policy.

Berman said the measure could lead to a loss of 40,000 jobs. She argued that having more roofs with solar panels also would alleviate the need for transmission lines and other infrastructure.

“I worry about our national security,” said Berman, a longtime advocate for renewable energy. “We’re seeing that it’s more important than ever for us to be energy independent in this world, and this is an area where we can do it.”

Documents obtained by Floodlight in conjunction with the Miami Herald and The Guardian showed the bill (H.B. 741/S.B.1024) had significant influence from Florida Power & Light Co., the state’s largest electric company and a powerful player at the state Capitol.

It is common for lobbyists to write pieces of legislation, but the story led FPL to create a website taking aim at the newspaper article. FPL is owned by NextEra Energy Inc., the world’s largest renewable energy developer.

“We are pleased Florida lawmakers voted overwhelmingly to pass bi-partisan legislation aimed at modernizing the state’s outdated net metering rules,” an FPL spokesman said in a statement emailed to E&E News. “It importantly directs the Florida Public Service Commission to phase out this regressive tax and make solar energy more equitable for all Floridians, not just the fortunate few.”

The Solar Energy Industries Association, the nation’s main solar trade group, slammed the Legislature’s action yesterday after the bill’s 24-15 passage, which was not fully along party lines. Some Republican senators voted against it, and some Democrats voted for it.

“Strengthening our energy independence at the national, local and individual level is more important now than ever before,” said Will Giese, SEIA’s Southeast regional director, who urged DeSantis to veto the measure. “States that enact bad legislation like this will see much of that business growth disappear.”

“If the war in Ukraine has taught us nothing, it is that America needs to take control of its energy,” he said. “It has to be energy independent.”

Brandes criticized the measure because he said it lacked input from industry experts, data from the PSC that showed subsidies and evidence from FPL that it needed to raise rates because of rooftop solar.

The net-metering bill was one of the few energy bills to make it through both chambers and onto the floor. The Florida Legislature is scheduled to finish by midnight Friday.

Other proposals ranged from 100 percent clean energy to furthering the state’s transportation electrification industry, something that Brandes brought up during yesterday’s debate.

In an amendment to the solar bill, Brandes asked that the state’s investor-owned utilities be banned from setting up electric vehicle infrastructure and then recouping those costs from all ratepayers. Doing so subsidizes EV drivers who charge on those networks, he said, turning the rooftop solar cost-shifting argument on its head.

“If the goal here is to end subsidies, then we should end subsidies across the board,” he said. “And one of the areas we are most subsidizing right now is where the [IOUs] put their charging stations in place and charge the rest of their ratepayers for that.”

A bill to prohibit Florida’s electric companies from including EV charging networks as part of their monthly rates stalled earlier this year. Similar fights are happening in other parts of the nation, including Georgia.

“Right now, your cars are subsidizing my cars. That’s what’s happening,” said Brandes, a popular senator known for reaching compromises with both parties. He cannot run for reelection because of term limits. “Your higher energy prices are subsidizing my ability to charge.”