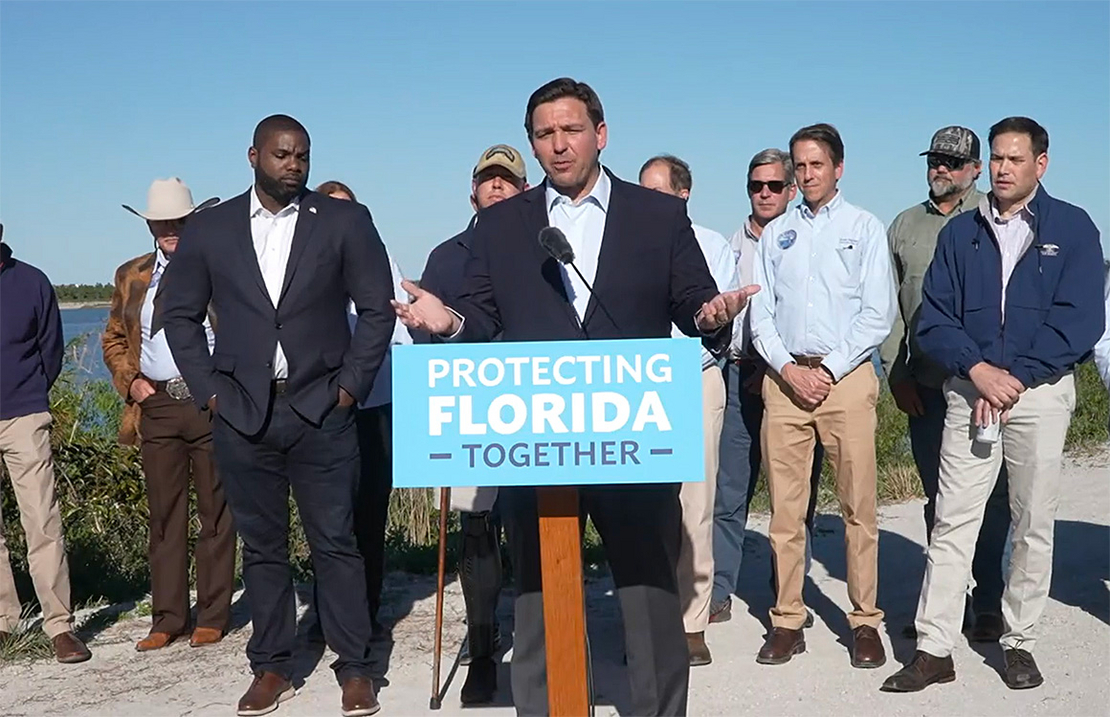 Florida Gov. Ron DeSantis and other Republicans from the state during a press conference yesterday. @GovRonDeSantis/Twitter

Florida Republicans yesterday blasted the Biden administration for not funding a critical reservoir needed to restore the Everglades, accusing Democrats of trying to torpedo a priority of Republican Gov. Ron DeSantis.

“That’s the Biden administration sending a middle finger over to Florida,” Republican Rep. Brian Mast said at a press conference in Wellington, Fla., where he was flanked by DeSantis, state environmental regulators and other lawmakers.

The tension arose earlier this month when the Army Corps of Engineers announced it would spend more than $1 billion from the newly passed infrastructure package to restore South Florida’s Everglades, a historic amount of money for a project that sees about $300 million annually through the appropriations process.

The corps at the time said the Everglades Agricultural Area Reservoir would not receive that money (Greenwire, Jan. 19).

The massive reservoir was designed — but has not yet been built — to hold and treat the nutrient-supercharged water from Lake Okeechobee and then allow the water to flow southward toward the Everglades as opposed to seeping east and west to fuel devastating algal blooms in estuaries.

The corps and White House did not immediately respond when asked about the Republicans’ accusations.

Mast was joined by Florida Republican Sen. Marco Rubio and Rep. Byron Donalds. None of the lawmakers who gathered to denounce the Biden administration voted for last year’s infrastructure package, which contained the Everglades funding.

Nevertheless, they hypothesized that the Biden administration was withholding money for the reservoir after DeSantis and former President Trump made it a “crown jewel” and a priority for the state. DeSantis is considered a potential White House aspirant in 2024.

Rubio said that around 2016 funding for Everglades restoration began to be consistent and then accelerated under Trump, and that the reservoir is a high-priority, state-federal partnership that’s based on engineering and has strong bipartisan support among the Florida delegation.

Rubio accused the Biden administration of opting to support other projects through the infrastructure bill for political reasons and vowed to push for additional federal funds.

“I actually think that’s one of the reasons — the reason — it wasn’t funded,” he said.

“Why does it have all this money for the Northeast corridor and Amtrak, because of New York, money for California, money for Alaska because of the votes that they were able to get from a senator there,” said Rubio. “Tree equity? Going after racist highways?” Rubio continued. “Any one of those single projects could have funded this and a bunch of others like this.”

Florida Democrats hit back yesterday, saying the plan is a complex one while calling Republicans hypocrites and “an embarrassment.”

“Restoring the Everglades is a deeply complex, comprehensive plan, and each project we’re able to complete is a monumental win for the millions of Floridians, and hundreds of endangered plants and animal species that rely on this ecosystem,” said Reps. Lois Frankel and Debbie Wasserman Schultz in a statement.

“It’s beyond hypocritical for the Republican Members who voted against this bill to turn around and complain about this historic investment. Their lack of graciousness is an embarrassment to our state.”

Despite the grumbling yesterday over the reservoir, the Everglades has emerged as a big winner in attracting infrastructure dollars.

Earlier this month, the Army Corps laid out in a report to Congress how it plans to spend almost $2 billion the agency received under the infrastructure package, and restoration in South Florida received the most, with a historic infusion of $1.1 billion.

That money stems from the $1.2 trillion infrastructure package, which President Biden signed last fall, which is also advancing more than 500 projects tied to the nation’s ports and waterways across all 50 states.

Much of the funding will support projects the Army Corps is overseeing meant to recreate the natural, languid flow of water from the Kissimmee River in central Florida to Lake Okeechobee and then south through the marshy prairie to Everglades National Park and Florida Bay. Before the ditching and draining of the marshes for agriculture and development early in the 20th century, water flowed naturally through the entire ecosystem.

But Republicans yesterday kept the focus on the reservoir.

At the press event, DeSantis applauded Trump for being “very helpful” in boosting Everglades funding in recent years and matching the state’s aggressive push to fund restoration, noting that 43 projects — including the state’s portion of the EAA reservoir — had been completed since he took office in 2019. He criticized what he called a “missed opportunity” for the Army Corps to fund the project.

While DeSantis complained about the reservoir not being included in the funding, Florida Agriculture Commissioner Nikki Fried, a Democrat challenging DeSantis for governor, shot back on Twitter.

“You mean thank you for the $1.1 billion, ‘the largest single investment in the Everglades in U.S. history,’” Fried wrote.