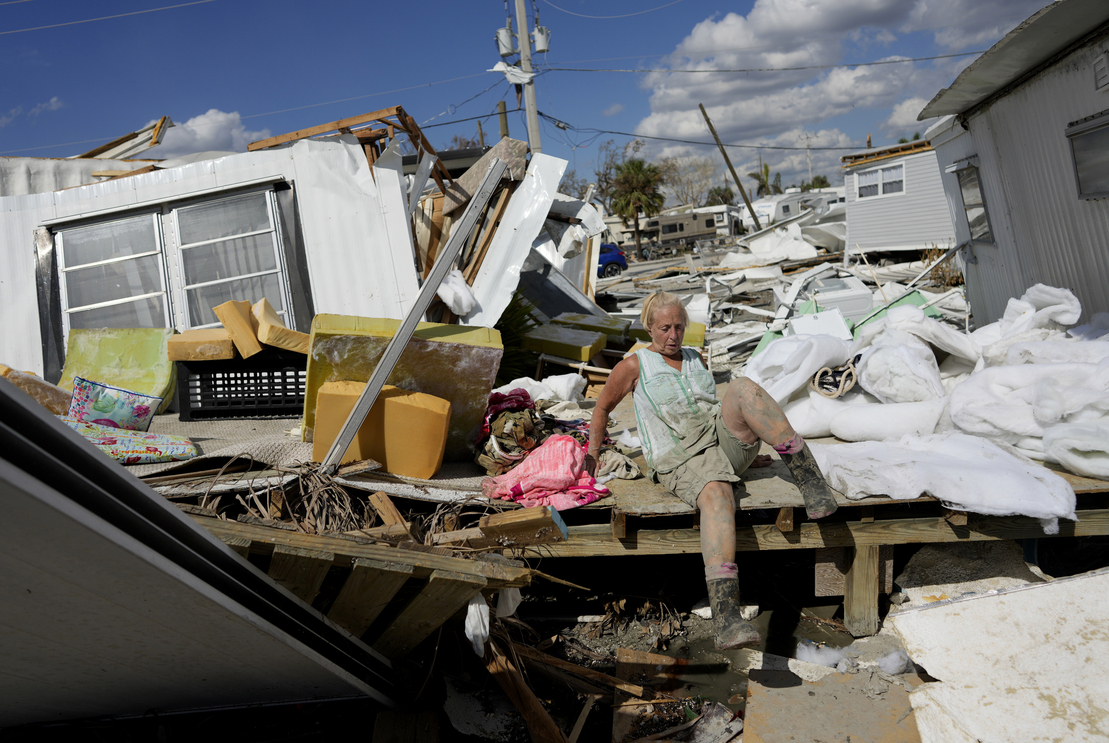 Kathy Hickey, 70, on Wednesday carefully climbs across a ruined trailer as she picks her way through debris to where she and her husband Bruce had a winter home, a trailer originally purchased by Kathy's mother in 1979, on San Carlos Island in Fort Myers Beach, Fla. AP Photo/Rebecca Blackwell

Florida has not spent more than $2.5 billion allocated by Congress and the Federal Emergency Management Agency in the past decade to help the state rebuild from major disasters.

The unspent money is intended to help Florida with long-term recovery from events such as Hurricane Michael, a Category 5 storm in 2018 that wiped out communities along the Florida Panhandle, and Hurricane Irma, which damaged the entire state in 2017. The spending delays come as Florida lurches into a massive rebuilding effort after Hurricane Ian pulverized the western side of the state last week.

Florida has spent only $1 billion of the $3.7 billion it’s received since 2012 through special disaster appropriations by Congress and from FEMA grants for mitigation projects to improve the state’s ability to withstand hurricanes, floods and other events, an E&E News analysis of federal records shows.

The money for long-term recovery is separate from short-term repair funds that FEMA gives states in the immediate aftermath of a disaster to pay for cleanup costs and to fix public buildings and infrastructure. FEMA gives grants to states for mitigation projects automatically after each major disaster.

Florida is not alone in having unspent long-term recovery funds, but its billions of dollars illustrate how states have struggled to keep up as Congress, FEMA and the White House have approved unprecedented funding.

The spending has come as natural disasters cause increasing damage, due in part to climate change, and as lawmakers take remarkable steps to mitigate global warming and its effects.

A spending law passed by Congress last week to fund the federal government into December includes $2 billion in long-term recovery funds for states that experienced a major disaster in 2021 or 2022.

A government-spending bill approved in September 2021 included $5 billion in long-term recovery funds for states that experienced a major disaster in 2020 or 2021.

In August 2021, President Joe Biden made a surprise announcement that he was approving $3.5 billion that states could use to increase their resilience against climate change and disasters. The allocation comes from FEMA’s disaster fund and does not need congressional approval (E&E News PM, Aug. 5, 2021).

Florida, the nation’s third-most populous state, was one of the top recipients with a $154 million grant.

Most of the federal government’s long-term recovery money has been distributed by the Department of Housing and Urban Development, which received the funds through a series of special spending measures approved by Congress. The HUD money aims to help homeowners, businesses and distressed communities rebuild from disasters.

Florida has received a total of $2.3 billion from HUD through eight grants in the past few years. But it’s spent only $475 million — about 20 percent, HUD records show. HUD has declared Florida a “slow spender” on two of the grants.

Florida’s slow pace occurs partly because it plans to use some HUD money to repair disaster-damage rental housing and build new apartments, “which always takes longer than individual home repairs,” said Carlos Martín, a former HUD analyst who is now a disaster expert at the Brookings Institution.

Another reason is that Congress recently directed HUD to spend some recovery money on mitigation projects that help communities increase their resilience to disasters through projects such as elevating buildings above flood levels and improving drainage systems.

“These are infrastructure projects, and HUD isn’t an infrastructure agency,” Martín said. “Not only is it a new program, which always causes federal and state delays, but it’s a program in an activity HUD wasn’t really prepared to do.”

Florida received two mitigation grants in the past couple of years from HUD worth $680 million and has spent just $47 million, HUD records show.

Other states are in a similar situation.

Louisiana has spent just 2.4 percent of the $1.2 billion it got from HUD for mitigation projects. Puerto Rico has not spent any of an $8.3 billion HUD mitigation grant to help the U.S. territory rebuild from Hurricane Maria in 2017.