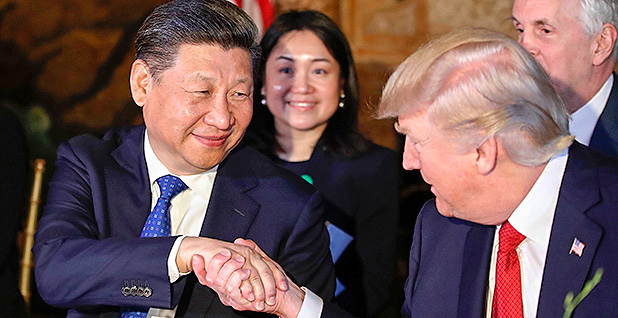 As President Trump hosts Chinese President Xi Jinping at his Mar-a-Lago resort in Palm Beach, Fla., this week, members of Florida’s congressional delegation — including Republicans — see an opening for the world’s two largest carbon polluters to talk about climate change.

Like many other parts of coastal Florida, Trump’s 124-room estate is seeing threats from sea-level rise, one of the most visible impacts of global warming.

"I’m not under any illusion that they are going to solve this over sitting down for a weekend, but hopefully the conversation is there," said Mast, one of 17 GOP lawmakers backing a resolution on climate change.

Next week, Sen. Bill Nelson (D), ranking member of the Senate Commerce, Science and Transportation Committee, will convene a field hearing on extreme weather and coastal flooding at a site less than 5 miles from Mar-a-Lago, featuring climate scientists and resiliency experts.

Sunshine State solar electricity capacity is soaring, with good solar thermal and photovoltaic resources up and down the peninsula that lawmakers on both sides of the aisle see as a boon for the economy.

Rep. Matt Gaetz (R), who drew national media to his Panhandle-based district when he introduced a bill to abolish U.S. EPA, stressed ahead of Xi’s visit that the U.S. should not be seen "in any way stepping aside when it comes to clean energy" (Greenwire, Feb. 24).

"Climate change is not going to be solved by one country, and that’s why it would be inappropriate for the United States to unilaterally disarm our economy while other actors continue to release large amounts of carbon into the atmosphere," Gaetz told E&E News.

Policy toward North Korea is likely the most pressing priority for the meeting, Gaetz said, "but I think it would be entirely appropriate for the president to work with China on global solutions to climate change."

China is now the world’s largest solar generator and top clean energy investor. Its energy agency has vowed to spend more than $361 billion on renewable power sources by 2020, in an effort to curb emissions and create jobs, and its coal consumption has dropped for three years in a row.

Rep. Darren Soto (D), who represents a suburban Orlando-based district, said it would be a step in the wrong direction for Trump to "cede the mantle" of clean energy leadership to China, particularly with a lot of the technology being developed on U.S. soil.

"They can see the climate changing right in front of Mar-a-Lago. So I would imagine that is not only symbolic but a very real-world setting to be able to have these kind of discussions," Soto said.

Florida also continues to cope with the Zika virus, a public health threat that medical societies have linked to climate change (Greenwire, March 16).

Nelson and Sen. Marco Rubio (R), who don’t often see eye to eye on domestic or international policy, this week lead a bicameral group of 47 lawmakers in a letter urging Trump to quickly distribute the $1.1 billion lawmakers approved to fight the disease.

The risks of the 2017 mosquito season are quickly becoming a reality as temperatures rise, they noted. So far, the Centers for Disease Control and Prevention has tallied approximately 216 cases of Zika virus in Florida.

"Zika may have faded from the headlines, but South Florida urgently needs federal resources to be dedicated to preventing infection, understanding the risks of birth defects and the discovery of a vaccine," said Rep. Ted Deutch (D), who represents a coastal district that includes Boca Raton and part of Fort Lauderdale.

The letter doesn’t explicitly cite climate change, but it’s top of mind for Deutch, co-founder of the bipartisan Climate Solutions Caucus. Deutch told E&E News he fears climate talk "is not going to happen unless President Xi brings it up."

Trump’s move last week to reverse federal rules established by President Obama to curb greenhouse gas emissions has cast doubt on the U.S.’s ability to meet its commitments under the Paris Agreement.

Trump’s stance on the issue seems to have emboldened Xi, who has spoken out in international forums about sticking to the deal instead of walking away from it (Climatewire, Jan. 18).

"I think it’s a good thing — it shows there’s going to be a competitive nature around how we’re going to reduce our carbon footprint among major industrialized nations," said Rep. Dennis Ross (R), who represents a central Florida district known for its citrus groves.

"If we’re going to do anything, if we can, in terms of reducing our carbon footprint, it’s going to take more than just the United States," Ross said. "It’s going to take all the other industrialized nations out there including China, so I think the venue … is as good a venue as anywhere to have the discussion."

White House press secretary Sean Spicer declined to comment yesterday on what the president’s response would be if Xi urges more action on climate change or asks the U.S. to fulfill its commitments to Paris. Spicer said he did not want to "get ahead" of the leaders discussing the issues.

Senior State Department and White House officials have hinted climate is not an agenda item or likely to be discussed in detail (Climatewire, April 6).

Rep. Francis Rooney (R), a former U.S. ambassador to the Vatican who now represents southwestern Florida, expressed support for Trump’s "America first" approach to governing, when asked about his hopes for the meeting.

On the environment, Rooney said Trump has made it clear he doesn’t want government to kill coal, but he speculates cheap natural gas prices are probably going to do it anyway.

"I’m sure climate change will be on the table for discussion, but the president’s view of letting free enterprise determine what’s happening with energy is probably a good idea," Rooney said.