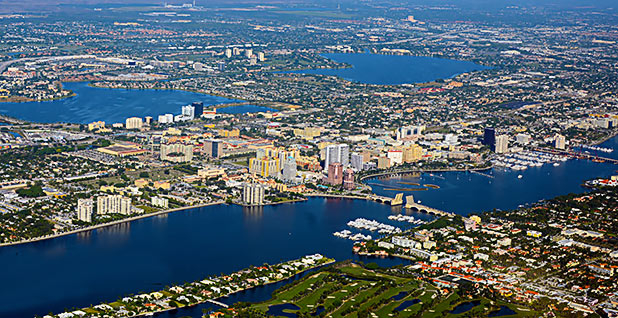 The coastal city of West Palm Beach, Fla., was the scene of a Senate field hearing on sea-level rise yesterday. Photo by D Ramey Logan, courtesy of Wikipedia.

And no coincidence that all of the witnesses, as well as the Democratic senator from Florida who convened it, repeatedly emphasized the threats of Trump’s proposed budget cuts to the very federal agencies best-positioned to study climate change and to predict and adapt to sea-level rise and other consequences of global warming.

"Well, that was the subtext to the whole discussion today," said Nelson, the ranking member of the Senate Commerce, Science and Transportation Committee, which scheduled the field hearing during the spring congressional recess.

Nelson’s host, West Palm Beach Mayor Jeri Muoio, told him that Florida communities like hers have no doubt of the existence of climate change.

"In West Palm Beach, we say the words ‘climate change,’ and we say them frequently," Muoio said. "We see it happening."

Beyond reinforcing the existence of climate change, though, Nelson said he hoped his hearing would make a stronger case to the president and his Republican colleagues in Congress that federal budgets need to stay robust for climate-related research. Trump budget director Mick Mulvaney recently told reporters, "We’re not spending money on that anymore," in reference to climate science, emphasizing that the administration considers it "to be a waste of your money." The White House and congressional Republicans have proposed cutting hundreds of millions of dollars dedicated to climate research.

But the work coming out of agencies like NASA, the U.S. Geological Survey and the National Oceanic and Atmospheric Administration is vital to understanding what risks communities face, Nelson said. Across southeast Florida, local governments are using projections of 2 feet of sea-level rise by 2060 to plan. If the White House denies the problem, then it is also denying possible solutions to it, like infrastructure spending to help communities build pumps, new water systems and other adaptive measures, Nelson said.

Nelson said he’s been making a case via Vice President Mike Pence to include adaptive measures in any infrastructure program the White House proposes. They’ve spoken twice in the past two weeks about a possible infrastructure bill, including at the signing of a NASA reauthorization bill.

Senate Democrats have released a blueprint of what they would like to see in the infrastructure package, and although they’re not labeled as climate change-related projects, the blueprint does include adaptation projects labeled as resilience measures. The infrastructure spending plan, if it proceeds, could pay for the sort of pumps that are in place on Miami Beach, Nelson said, and help communities build stronger sea walls along federally owned waterways.

"We just got the NASA bill done in a bipartisan way," he said. "Now, let’s pick up on that goodwill. Let’s go with a bipartisan infrastructure bill. And let’s keep that momentum going and see if we can’t get something done. It’s so necessary."

But Nelson dropped the rosy talk of bipartisanship when it came to scientific integrity, an issue he called "a commentary of our times." Nelson decried reports that some federal agencies have been scrubbing the words "climate change" from their websites and their missions, and has filed a bill aimed at ensuring that scientists have the freedom to openly communicate about their work.

"What do we do about it?" he asked. "Well, first, we need to be clear about the facts that are presented to the public and fight against the political censorship of our climate scientists and their data," Nelson said. "If a doctor were barred from using the word cancer, he or she can’t do his job. And the same is true of the scientists and the work that they do to understand and educate the public about the Earth’s increasing fever."

Nelson asked Jennifer Jurado, director of environmental planning and community resilience for Broward County, if she could do her job without using the words "climate change."

No, said Jurado. In her county, sandwiched between Palm Beach and Miami-Dade counties, rising sea levels are putting pressure on freshwater aquifers. Water tables have risen as sea levels have pressed into the region’s limestone geology. When it rains, there’s nowhere for surface water to go, because the subsurface water tables are now so much higher.

"I can’t imagine planning for the future conditions of a community, making informed planning and policy investment decisions, without recognizing the reality of what the driving factors are," Jurado said. "I can’t imagine those being informed or fruitful investments if they weren’t based on critical use of scientific data … and the impacts of climate change on our environment."

The witnesses, prompted by Nelson, made the case that scientific data is crucial for protecting lives, property and the economy of South Florida. Nelson pointed out that the same sort of data collected by federal scientific agencies to track hurricanes and their velocity and intensity is also used for climate research. Ignoring it is like cutting off your nose to spite your face, Nelson said.

"Exactly," said Ben Kirtman, a University of Miami climate scientist. "It’s exactly the same kind of data that we use to make better forecasts of rainfall, to make better forecasts of hurricanes. And all of that data, the data of the climate system, we don’t make the distinction when we observe the atmosphere and the ocean, the land surface. … We don’t make a distinction of whether it’s climate change data or whether it’s just weather data. It’s just data."

Ignoring such information represents a threat to lives and property, as well as economic and national security, Kirtman said.

"If we stop collecting data, that’s truly putting our head in the sand," Kirtman said.

He was echoed by Carl Hedde, an insurance executive with Munich Reinsurance America Inc., and Leonard Berry, a retired Florida Atlantic University climate scientist who helped co-found Coastal Risk Consulting LLC, a company that provides people with a flood rating of their property based on sea-level rise and other projects culled from government and private-sector sources.

No congressional Republicans attended the hearing, although Nelson said they were invited. If anyone was wondering why no one with "the opposite opinion" was a witness at the hearing, though, it was by design, Nelson said.

The Commerce, Science and Transportation Subcommittee on Space, Science and Competitiveness, chaired by Sen. Ted Cruz (R-Texas), allowed just one witness from Democrats in 2015 at one of the last hearings on the subject, he said. The other four witnesses invited by Republicans were climate deniers, he said.

"We’ve had that plenty of times in front of this committee," Nelson said. "There has been a fair hearing of all parts of the issues."

Rep. Ted Deutch (D-Fla.), who co-founded the bipartisan Climate Solutions Caucus with a Republican House colleague from Florida, said that if Nelson could carry a message to the administration through Pence, it should be to consider the interconnected nature of the environment and the economy in Florida.

"Perhaps it’s a rhetorical question, but why is it, when the business community understands what’s at stake for the future of our economy, and our local governments understand what’s at stake, why is it that there are some in important roles in our government who continue to put their head in the sand?" Deutch said. "And by the way, in Florida, that sand is the coastline, and the water’s getting closer."