Fla.’s hardened grid took a beating, and outages could last 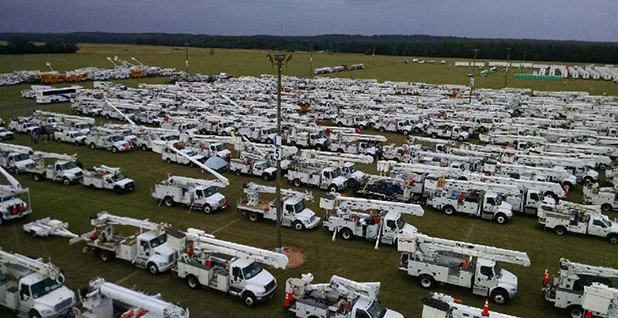 Duke Energy Corp. workers were staged ahead of Hurricane Irma so they could quickly swing into action. @DukeEnergy/Twitter

ATLANTA — Hurricane Irma started its long, slow move out of Florida yesterday, spreading across much of the Southeast and leaving more than 8 million people without power.

That figure is likely to have climbed overnight, as much of Irma’s now-tropical-storm-force winds were on track to move through the Carolinas, Georgia and Alabama. Irma left 6.5 million Floridians without electricity after the monster storm beat up on power poles and wires and flooded much of what was buried underground.

Florida’s major utilities said they still were determining whether there was major structural damage and that it would take weeks before all of the lights would be back on. The electric companies spent billions to strengthen the grid after back-to-back storms more than a decade ago; without that, Irma’s wrath would have been significantly worse.

"We would be facing a much longer restoration," said Eric Silagy, CEO of Florida Power & Light Co., the state’s largest electric company. "If we were replacing tens of thousands of poles like we did during Wilma, then that is a much different restoration process."

FPL spent $3 billion to install smart meters and other smart grid technology, bury power lines and replace some wooden poles with concrete ones. Parts of Florida, especially the west coast, did receive winds as high as 145 mph — enough to snap concrete poles — and Silagy said that had they been wooden, thousands more would be down across the state.

"Without the storm hardening, we would have seen much more prevalent structural damage," he said.

Even with all of the investment, Irma’s broad reach and intense winds hit every part of FPL’s 27,000-square-mile, 35-county territory. Crews restored 1 million outages Sunday night and into yesterday, but Silagy said they were bracing for more outages throughout the day as Irma climbed up through north Florida.

"It is a magnitude that we haven’t seen before," he said.

He warned that some customers could go weeks before they would have electricity, particularly if there were structural damage at their house or business. FPL had workers patrolling the system, flying in helicopters over transmission lines and sending up drones to get a thorough look of the grid, he said.

Irma’s unpredictable path basically threw projected outage figures out of the window. Tampa Electric said as many as 75 percent of its customers would be without power, but a last-minute jog east cut that figure down to a little more than 50 percent.

Duke Energy Florida’s totals climbed to 1.3 million of its 1.8 million customers. Like the others, the utility was assessing damage yesterday to determine whether much of that was from flooding or high winds or a combination of both.

Much of the damage was at the grid level — transmission and distribution — and not with power generating stations, said spokeswoman Catherine Butler.

"This storm was really one of the most powerful storms in the Atlantic and caused widespread damage," she said.

Irma began flooding the coasts of Georgia and South Carolina early yesterday, and each state’s power outage figures started climbing as the day went on. Georgia Power and the electric cooperatives reported more than 1 million outages in total by midafternoon.

Utilities in South Carolina reported more than 250,000 outages by the late afternoon.

Irma’s mark may be catastrophic winds and storm surge, but, for the utilities, it was also debris. Utilities will prune trees away from power lines, but that doesn’t keep them completely clear of falling vegetation.

Indeed, Irma probably stirred up more debris than any other storm for FPL, Silagy said.

"It’s Mother Nature’s way of clearing out vegetation," he said. "We’ve had 10 years of growth that got pruned because of Hurricane Irma."