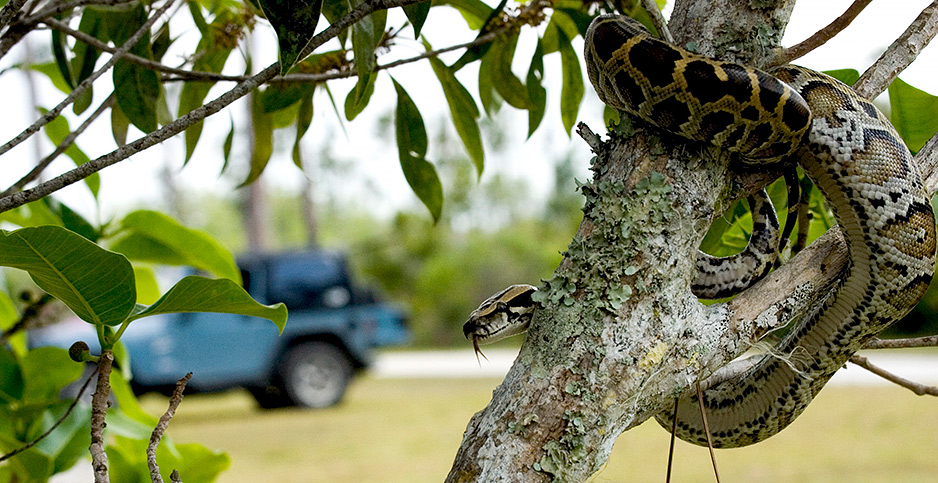 Python wranglers and iguana fans are feeling the squeeze as states seek to corral invasive reptiles.

Florida, naturally, leads the way, but it’s not alone.

Some of the creatures embody horror movie central casting, like the Burmese python, which grows up to 20 feet long and takes prey as big as white-tailed deer. Others are a different sort of scary, like tegus, South American natives that eat small mammals and alligator eggs.

As for green iguanas, they can be a nasty little wrecking crew for egret nesting sites, as well as sea walls, water control structures, dams and levees.

All excite strong and competing passions, as the Florida Fish and Wildlife Conservation Commission now knows and as officials in other states may soon find out.

"Each of the … listed snakes and the monitor pose a real threat to the well-being of Florida’s native wildlife," commission staffer Melissa Tucker warned at the outset of the agency’s videotaped Feb. 24 meeting.

"We have to be realistic and say that we are not, we are not winning this war, not by a long shot," Ramos said, "and we must. Failure is not an option. This exotic problem may very well be — and I don’t think I’m exaggerating in saying this — the problem of our times."

But well over 100 people lined up to testify by telephone at the virtual hearing, and a good number opposed the restrictions, which will include new requirements for pet owners to try to prevent escapes and an eventual ban on the breeding and sale of the specified reptiles.

Joshua Jones, deputy director of government affairs for the Pet Industry Joint Advisory Council, further warned of "unintended consequences" like black markets and cited pet owners’ fear that other animals will face "burdensome regulations in the near future."

The commission nonetheless voted 7-0 to adopt the new regulations.

"The time has come to take a bold stand against these real threats to our environment," commission Chair Rodney Barreto said.

Florida officials have long struggled to reckon with invasive species, which reproduce even faster than viral "Florida man" news events.

The Port of Miami is one of the top three U.S. areas that receive wildlife imports, and the number of declared animal shipments has doubled nationwide since 2000. Between 1999 and 2010, over 9 million reptiles were imported through Florida ports.

More than 500 different nonnative species have been documented in Florida, with the state’s wildlife commission reporting that "most of Florida’s invasive species became established after they either escaped or were illegally released from captivity."

Close tracking by the U.S. Association of Reptile Keepers, though, shows that some other states are catching up. The organization’s online alert page reports over the past year that more states are looking to crack down:

A wider-ranging Senate bill introduced last Congress would have required federal agencies to put in place strategic programs to control invasive species and establish monetary-prize competitions for technological innovation in invasive species management, among other steps.

"Few issues are more bipartisan than the need to protect our communities from invasive species," Barrasso said in 2019.

A 2019 study published in the journal Biological Invasions found that of the 1,409 reported populations of 311 invasive animal species in national parks, only 11% are reported as being "under control" and only 23% have management plans at the park level (Greenwire, Dec. 3, 2019).

Invasive lake trout, for instance, have entered Yellowstone National Park, while quagga mussels have clogged the Lake Mead National Recreation Area, and at Hawai’i Volcanoes National Park, feral pig rooting has contributed to the spread of some invasive plant species.

"Park staff report that it is a struggle to communicate the importance of invasive animal control efforts to their park leadership," the study noted.