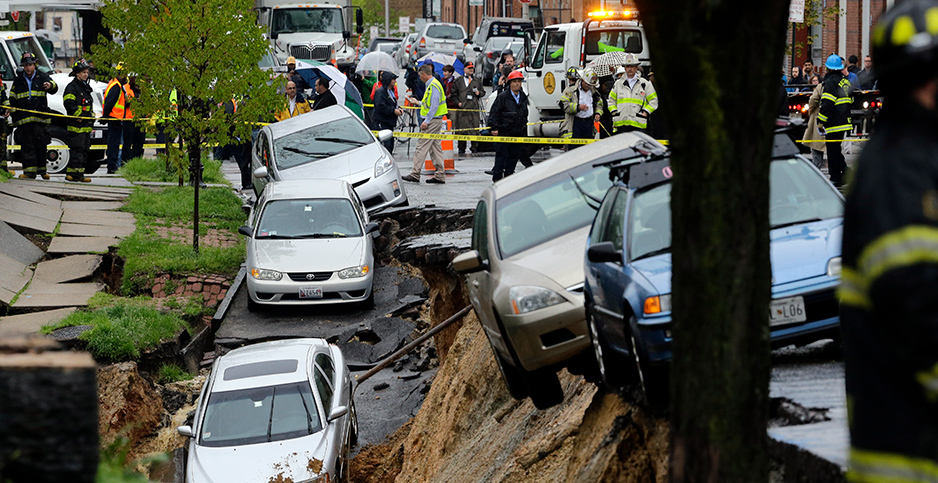 Cars sit on the edge of a sinkhole in Baltimore after heavy rains caused flooding across parts of the city in 2014. Baltimore officials are suing oil companies for contributing to climate change. Associated Press

From his covered porch on Baltimore’s Frederick Avenue, Scott Harris watched the street in front of his home morph into an unrelenting river.

A deluge of brown water surged along his stretch of the road, creating waves under the tires of cars inching through the flood. A chunk of asphalt broke loose and flapped under the water’s pressure, while rogue green trash cans were swept away by the current and disappeared around street corners.

"It’s coming like a river of water," a man said in a video filmed by Harris in May 2018, the month when a massive rainstorm led to flooding in nearby Ellicott City, Md., that reached southwest Baltimore.

"Where’s it coming from?" the man in the video wondered aloud. "We don’t know."

Situated on the Chesapeake Bay, Baltimore is on the precipice of many more flash floods and other events supercharged by global climate change. Rising temperatures worldwide have led to sea-level rise, extreme heat and other impacts that are creating new pressure for infrastructure and public health in Charm City and elsewhere.

The issue has now landed in the Supreme Court — sort of.

In a landmark 2018 lawsuit filed in the Circuit Court for Baltimore City, the mayor and City Council argued that companies like BP PLC and Chevron Corp. that have spent decades producing fossil fuels — and spewing greenhouse gas emissions into the atmosphere — have violated state trespass, public nuisance and consumer protection laws and should be the ones to pay for Baltimore to address climate impacts.

"[T]he parties who have profited from externalizing the responsibility for sea level rise, extreme precipitation events, heatwaves" are the ones that should bear the cost of addressing those impacts — rather than "local taxpayers, residents, or broader segments of the public," Baltimore argued in its original complaint.

Later this month, the nation’s highest bench will weigh in on a highly technical issue stemming from Baltimore’s lawsuit that could affect the outcome of this case and many others like it that have been filed in state courts across the country. Oil and gas industry attorneys have argued that the cases instead belong in federal court, where they may face a higher risk of failure.

At the very least, industry lawyers’ challenges have significantly delayed proceedings in each climate case.

The question before the Supreme Court in BP v. Mayor and City Council of Baltimore is a narrow one related to the venue battle, but if the justices side with industry in the case, it could hurt Baltimore’s shot at getting oil and gas firms to foot the bill for climate response.

It’s still far too early to tell how much — or even if — energy companies will have to pay state and local governments. It’s also unclear how the money would be allocated.

But environmental advocates like Gracie Chaney of the Sunrise Movement Baltimore said they hope that any potential industry payments would be spent on individuals and families facing the largest summer heat and air pollution threats, rather than simply going toward building massive sea walls to block rising tides.

Climate impacts are "exacerbating asthma problems and upper respiratory illnesses, and there’s more and more studies coming out finding that it has a very negative impact on pregnancies," Chaney said.

"That’s terrifying," she continued. "How do you put a number on damage to … your health?"

‘Mother Nature has no bounds’

While the courts dig in on questions over the appropriate venue for Baltimore’s climate challenge, the city’s coast is getting swallowed up inch by inch.

Sea levels in the Chesapeake Bay rose at twice the rate of the global average in the 20th century, according to Ming Li, professor at the University of Maryland Center for Environmental Science.

"The Chesapeake Bay region is recognized as the third most vulnerable place to sea-level rise and coastal inundation in the United States," he said.

More than 6% of Baltimore City is at "high risk" for flooding, according to the 2018 Disaster Preparedness and Planning Project (DP3) report outlining the city’s climate adaptation strategy.

"By the end of the century, approximately 180 square miles of currently dry land along Maryland’s coastline is expected to be inundated," said the report, which was approved by the Federal Emergency Management Agency. "Coupled with more frequent and extreme precipitation events these conditions could become a common hazard."

Baltimore relies on FEMA flood maps for infrastructure planning, but the city regulates flood heights a couple of feet higher than the federal minimum to provide an additional buffer against the risk of inundation.

Even with extra precautions, city planning in the face of constant flooding is a moving target.

In the aftermath of the Frederick Avenue flood, Harris said some of his neighbors were forced to move out of their homes due to the damage. Some victims didn’t even know they were living in a floodplain.

"Almost every single basement was flooded," Harris said of the homes on his street.

"It seems that someone just conveniently forgot to tell whoever was trying to purchase or live in those homes, especially along the first floor, that they were not supposed to be renting or having people live in those basements," he continued.

Relying on historical data to gauge when, where and what kind of flooding could occur during any given rainstorm is a "roll of the dice," said Victor Ukpolo, former environmental planner at Baltimore’s Department of Planning.

"If we design it to a certain standard, Mother Nature isn’t going to say, ‘OK, let’s stop raining at this standard, because man set that standard,’" Ukpolo said.

"Mother Nature has no bounds," he added, "and we’re learning how unpredictable weather events can be."

Weather threats become "compounded with poverty, racism and other institutional forms of lack or deprivation," said Stephanie Smith, assistant director for equity, engagement and communications at Baltimore’s Department of Planning.

During a climate crisis, she continued, "it makes the vulnerable that much more impacted."

Communities like Baltimore’s Franklin Square — located in a neighborhood that is 85% Black and has a median household income of $33,500 — heat up to 6 degrees higher than the city’s coolest neighborhoods, according to a recent joint investigation by NPR and the University of Maryland’s Howard Center for Investigative Journalism.

Across the United States, research shows that "redlining" — the discriminatory practice of denying government services and financial assistance to people of color — has contributed to the unequal distribution of climate impacts like extreme heat.

Baltimore’s DP3 report predicts that, even under lower projections of greenhouse gas emissions, the number of 90-degree days in the city will double by the end of the century, and the brunt of sweltering temperatures will fall on the communities least equipped to withstand them.

"You have folks who — because of impervious surfaces, because of poor quality housing, because of the lack of tree canopy and green space — have been personally impacted by heat extremes," said University of Maryland associate professor Sacoby Wilson. "Those populations are ones that are going to have more heat-related morbidity and mortality risk.

"Our laws are not protecting those populations," he continued, "which leads to these disproportionate impacts, which leads to issues of trespass and nuisance and product liability."

Baltimore can’t truly get to work on its quest to secure industry compensation for climate impacts until the Supreme Court settles the score on the wonky issue that has plagued climate liability lawsuits nationwide.

Oil companies have been waging a yearslong jurisdictional battle to move cases like Baltimore’s from state to federal court, where they may be more likely to be dismissed. Federal judges across the country have largely agreed that state courts are the proper venue for climate liability cases that raise claims under state laws governing public nuisance and corporate conduct and have issued remand orders to that effect.

Energy industry lawyers have appealed those rulings on the only grounds available to them: by arguing that the climate lawsuits deal with issues involving federal officials. Several federal appellate courts have struck down industry lawyers’ bids.

This fall, the Supreme Court agreed to review the question of whether federal appeals courts may consider a broader set of issues when hearing remand order cases.

The oil and gas industry has since implored the Supreme Court to widen the scope of the case by deciding that all cases like Baltimore’s belong in federal court because they deal with interstate greenhouse gas emissions.

Such a move would severely delay or possibly derail the lawsuits.

"[T]he Court’s precedents dictate that such claims necessarily and exclusively arise under federal common law," lawyers for BP and other companies wrote in a recent Supreme Court brief (Climatewire, Nov. 17, 2020).

"To preserve judicial resources, the Court should address that ground for removal and confirm that this case and others like it belong in federal court," they continued.

At least three similar petitions stemming from climate battles in Colorado, Rhode Island and California are pending before the Supreme Court

The justices will hear arguments in BP v. Baltimore on Jan. 19. Regardless of the verdict, Baltimore’s legal bid for compensation still has a long road ahead.

Though some Baltimore residents may see the city’s chronic flooding and heat issues as an unavoidable part of life on the Chesapeake Bay, Harris said he refuses to accept Baltimore’s climate woes as the new normal.

"People don’t see climate change and understand or think it’s a real thing until it affects them," Harris said. "And this has definitely affected me."