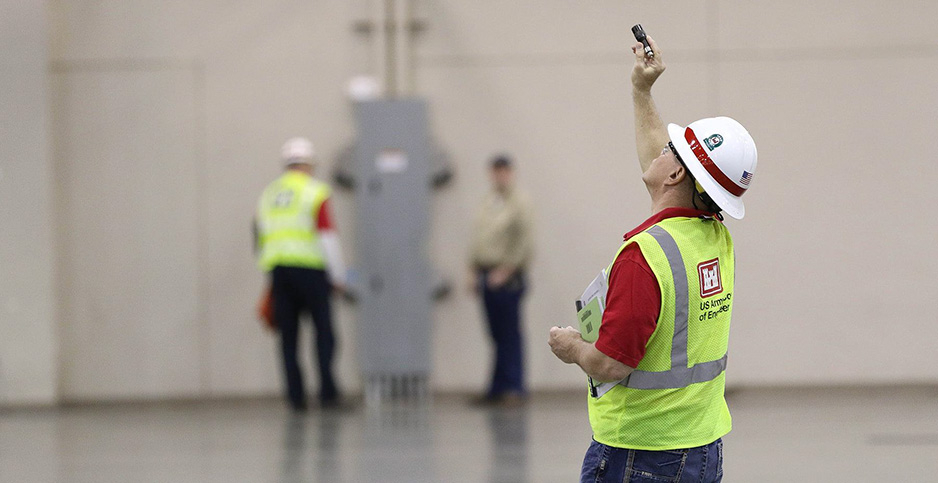 A member of the Army Corps of Engineers evaluates a building in Tulsa, Okla., for its potential use during the COVID-19 pandemic. Cover Images/Zuma Press/Newscom

A massive effort by the Army Corps of Engineers to combat the COVID-19 pandemic is not interfering with levee repairs and other flood control measures, agency officials told E&E News.

Preparing the nation for spring floods remains a top priority as more than 15,000 Army Corps employees help build emergency medical facilities around the U.S., officials said. That accounts for almost half of the Army Corps’ workforce of 37,000 people.

"No impacts to [levee] project repair schedules have been reported," Army Corps spokesman Eugene Pawlik said in an email.

The Army Corps faces enormous pressure to fix scores of levees that were damaged last year by record levels of precipitation that swelled rivers and caused widespread flooding, particularly along the Mississippi and Missouri rivers.

NOAA warned two weeks ago of "widespread flooding" in the coming months, and researchers said last week that dozens of counties in the Midwest and Great Plains could experience major flooding and significant COVID-19 outbreaks at the same time.

The Army Corps is leading the effort to tackle both threats.

The Kansas City District includes most of Missouri and the northern half of Kansas, including many communities along the swollen Missouri River and its tributaries.

Levee repairs, which are done by Army Corps contractors, are not hindered by social distancing requirements because employees often work alone operating equipment, planting grass or handling other restoration functions.

"As far as levee repairs, that type of work lends itself to social distancing. So it doesn’t have an impact," said Mike Glasch, a spokesman for the Army Corps’ Omaha District, which covers much of the Great Plains and northern Rocky Mountains. "Contractors do have preventative measures in place. If anyone is showing symptoms [of COVID-19], they’ll be sent home."

The Omaha District is overseeing repairs to 28 levees and continues to hire companies and solicit bids.

"There are still contractors looking for that work," Glasch said.

Congress gave the Army Corps record funding in 2018 and 2019, including $15 billion in emergency funds for projects to reduce flood and storm damage.

President Trump’s proposal to give the Army Corps $6 billion in fiscal 2021 is down from the agency’s $7.65 billion allocation this year. The funding plan drew bipartisan criticism in Congress, which historically gives the agency more money than presidents request.

Yesterday, the Army Corps announced that it had awarded a $17 million contract to repair a levee system in southeastern Texas and that it signed an agreement with the city of Detroit to help guard against expected flooding this spring because of high water levels on Lake Erie.

In the Army Corps’ New Orleans District, which covers southern Louisiana, levee projects "are not impacted by COVID, but they are impacted by the [Mississippi] river itself, as work must stop during high water," spokesman Rene Poche said.

Sections of the Mississippi River in Louisiana are at major flood levels, or are projected to be in coming days, because of heavy rains upstream. The Army Corps is considering opening the Bonnet Carré Spillway in central Louisiana to divert part of the river into Lake Pontchartrain in New Orleans.

The agency’s flood control efforts continue as it leads the effort to find and convert large spaces into emergency hospitals.

The Army Corps is overseeing the conversion of the Javits Center in Manhattan into a 3,000-bed medical facility to handle nonvirus patients, in an effort to make room at hospitals for people with COVID-19. The first phase of the conversion is complete, providing 1,000 hospital beds, and the second phase is scheduled to be finished Wednesday.

The Army Corps is overseeing the conversion of seven other facilities, including three in New York City suburbs, three in the Chicago area and one in Detroit. Agency personnel are also scouting potential sites nationwide and in U.S. territories under the direction of the Federal Emergency Management Agency.

As the Army Corps takes on new responsibilities, it has pulled back from other work and closed all of its recreational facilities, including campgrounds, beaches and visitor centers.

Agency personnel are also pulling back from other work to avoid exposing personnel to the coronavirus.

"We do environmental work in New York and New Jersey," said James Lowe, a spokesman for the Army Corps’ Kansas City District. "That’s being slowed down because some of those sites are being shut down for safety reasons."