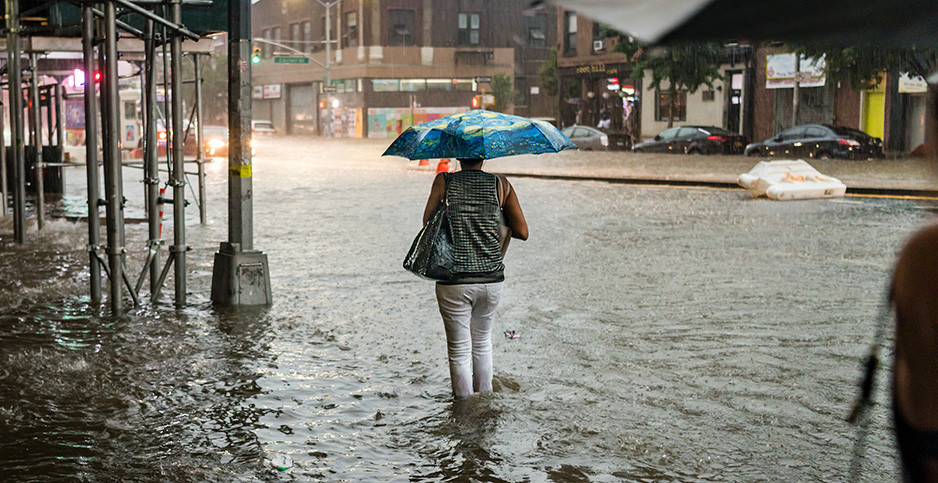 Urban flooding is getting worse in part because of climate change. Brooklyn is inundated during a severe storm last year. Gabriele Holtermann-Gorden/Sipa/Newscom

When Hurricane Harvey devastated Texas in 2017, the neighborhood that suffered the worst flood damage was a section of southwest Houston where 49% of the residents are nonwhite.

When Hurricane Katrina hit southeast Louisiana in 2005, the damage was the most extensive in the region’s African American neighborhoods.

Of the seven ZIP codes that suffered the costliest flood damage from Katrina, four of them had populations that were at least 75% black, government records show.

But urban flooding and its disproportionate impact on minorities and low-income residents are becoming a growing concern as climate change intensifies floods. At the same time, urban development is creating more impervious surfaces in cities, and aging municipal sewer systems are overwhelmed by the increasing water.

"The [flood] risk to the nation is concentrated in the metro areas," flood expert Doug Plasencia said yesterday at a national conference on flooding. "Socially vulnerable populations add to the complexity."

A major concern about flooding in cities is that the residents who are most vulnerable — those who live in the lowest-lying areas or in neighborhoods without green space to absorb water — are often poor and members of minority groups.

"The reality is that you typically find in our floodplains many of society’s vulnerable populations," Chad Berginnis, executive director of the Association of State Floodplain Managers, said at the conference yesterday. "When you look at the entire urban community, there are profound impacts due to urban flooding that go beyond physical property damage [and include] the risk of injury and loss of life."

Urban flooding has the potential to exacerbate the racial inequality that is an undercurrent of the nationwide protests over the May 25 killing of George Floyd, a black man in custody by Minneapolis police. Some protesters have denounced broad and persistent societal inequalities including the disproportionate number of blacks dying from COVID-19.

Research has shown that in states such as Illinois and Michigan, the costliest flood damage occurs in Chicago and Detroit — major cities with large black populations.

A report published in March 2019 by the National Academies of Sciences, Engineering and Medicine found that while urban flooding affects a wide range of demographics, it is most harmful to minorities, low-income residents, and others without the resources to handle the damage and disruption.

"While severe storms fall on the rich and poor alike, the capacity to respond to and recover from flooding is much lower in socially vulnerable populations that even in the best of times are struggling to function," the report concluded.

In Houston, the researchers found that "the poorest residents are most likely to live on the lowest-lying land, and so are most subjected to higher flood exposure."

In Chicago, residents of a middle-income black neighborhood told researchers that they "receive less flood protection and are given lower priority."

The study was requested by the Federal Emergency Management Agency in an effort to understand the causes and impacts of urban flooding.

A 2018 report on urban flooding by the University of Maryland and Texas A&M’s Galveston campus found that many city sewer systems "are in poor condition" and unable to handle excess water from rainfall or river overflows.

E&E News analyzed $31 billion in claims for flood damage paid by FEMA’s National Flood Insurance Program between January 2010 and August 2019 and the ZIP codes in which the flood damage occurred.

The analysis found that nearly 20% of the claim dollars were paid in ZIP codes where at least one-quarter of the residents are black.

Those ZIP codes, however, made up only 13% of the U.S. population, suggesting that flooding disproportionately affects neighborhoods with a substantial black population.

The disparity was particularly acute in Louisiana when Hurricane Katrina notoriously destroyed many black neighborhoods such as New Orleans’ Lower Ninth Ward.

E&E News analyzed flood insurance payments related to Katrina and found that homeowners in just seven ZIP codes received nearly half of the $13 billion in flood claims. Four of those ZIP codes had populations that were at least 79% black, E&E News found.

"Urban flooding definitely merits national attention," said Berginnis of the floodplain association. "We are going to have worsening urban flooding problems due to development and climate change."