Floods are washing away Black history in this Md. city 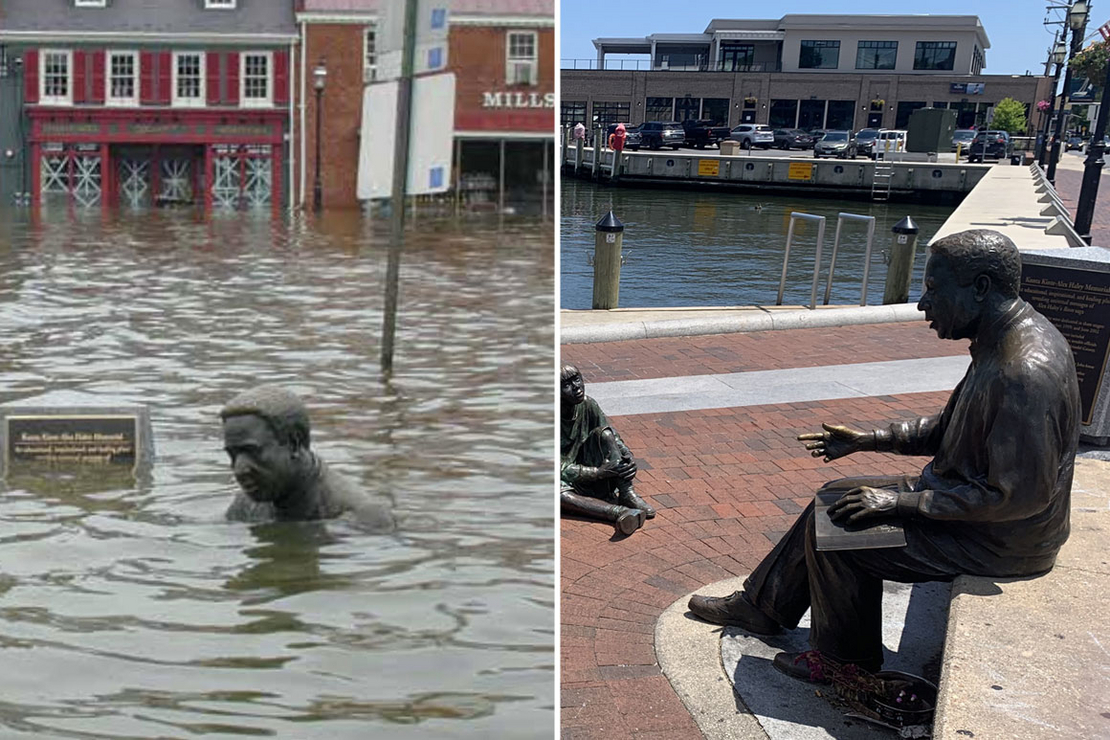 ANNAPOLIS, MD. — Rita Coates fought a feeling of panic as the water gushed toward the graves.

Coates, a longtime member of the Brewer Hill Cemetery Association, watched a torrent of stormwater wash over this historic African American graveyard last year, erasing the engravings on headstones and the legacies they represented.

“All the water was running through washing away the soil from the graves,” Coates recalled in a recent interview with E&E News. “There were some grave markers that were so ruined or messed up that you could not tell the names on them.”

Brewer Hill Cemetery is the oldest Black graveyard in Annapolis. It contains the remains of more than 7,000 slaves and freed African Americans who were not allowed to be buried alongside white people.

Black soldiers from the Civil War, the Spanish-American War, both world wars and the Korean War found their final resting place in Brewer Hill. It was not until 1942 that Black veterans were allowed to be buried in the Annapolis National Cemetery next door.

Brewer Hill is also the final resting place for some prominent people, including William Bishop, a doctor who founded Anne Arundel General Hospital, and Wiley Bates, an alderman who built the first Black high school in Annapolis during Jim Crow and segregation.

“It’s not just an ordinary cemetery. It’s a cemetery that is deep in African American history,” said Reginald Harris, president of the Brewer Hill Cemetery Association.

But rising waters threaten to wash away the physical markers of that history. And climate change is a culprit.

Whenever it rains, stormwater shoots out of drainage pipes from the building across the street and into the back of Brewer Hill Cemetery, where it damages headstones and contributes to soil erosion.

The problem has gotten worse as storms have dumped more rainfall on Annapolis in recent years, according to Harris, who has an aunt buried in the cemetery, and Coates, who has grandparents there.

It’s also an expensive problem to solve. One potential avenue for funding is a lawsuit filed by Annapolis and Anne Arundel County against oil and gas companies that asks fossil fuel firms to help cover the costs of addressing climate change impacts, including floods and sea-level rise (Climatewire, July 16).

Climate change has increased the intensity of rainfall in Maryland and across the northeastern United States, research shows. As humans continue to release planet-heating emissions, warmer ocean temperatures are causing more water to evaporate into the air. When more moisture-laden air merges with a storm system, it produces heavier precipitation.

“The warmer ocean provides a resource of moisture that is easier to tap into by weather systems and this can fuel weather systems and heavier rains (and snows),” Kevin Trenberth, a distinguished scholar at the National Center of Atmospheric Research, said in an email to E&E News.

From 1958 to 2016, the Northeast saw a 55% increase in the number of “heaviest 1% precipitation events” — or those with a 1% chance of occurring in any given year, according to the U.S. Global Change Research Program’s Fourth National Climate Assessment.

“An issue for this entire area is just the increase in intensity and frequency of rainfall,” said Annapolis Alderman Bob Savidge. “It has overwhelmed quite a bit of our stormwater infrastructure, which is typically designed for a 10-year storm event and not these 50-year or 100-year storms that we’ve been having more frequently.”

Savidge, who works for Anne Arundel County on stormwater management projects when he’s not serving on the Annapolis City Council, said extreme precipitation has flown under the radar when it comes to public awareness of global warming.

“The immediate thing people think of with climate change is the rising sea level. And that is going to have its own risks,” he said. “But another impact of climate change, the increased rainfall, is going to affect a lot more cultural resources all around town.”

About a mile from the cemetery, the Kunta Kinte-Alex Haley Memorial on City Dock in downtown Annapolis faces a similar threat from global warming.

The memorial commemorates Kunta Kinte, a character in the Pulitzer-Prize-winning 1976 novel “Roots: The Saga of an American Family” by Alex Haley, as well as the popular 1977 TV miniseries “Roots.”

According to Haley, Kinte was based on one of his ancestors, a Gambian man who was enslaved in 1767 and taken to America aboard the slave ship Lord Ligonier. The memorial features a life-size bronze statue of Haley sitting and reading to three children of different ethnicities, as well as a plaque honoring Kinte’s arrival in Annapolis.

Unlike Brewer Hill, which is vulnerable to stormwater flows, a different rising water problem is putting the memorial at risk.

Climate change is causing more frequent “sunny-day” flooding, which occurs when exceptionally high tides spill onto City Dock and surge down the surrounding streets. Annapolis has seen a 925% increase in sunny-day flooding since the 1960s — the most of any U.S. city, a recent NOAA report found.

“The type of flooding that Annapolis has experienced, high-tide flooding, has increased by a factor of three to five over the last 20 years. And that’s entirely due to increases in relative sea level,” said William Sweet, an oceanographer at NOAA’s National Ocean Service and a co-author of the report.

In addition to sunny-day flooding, City Dock is uniquely vulnerable to hurricanes and tropical storms, which are also growing stronger because of climate change, according to a growing body of research.

After Hurricane Isabel slammed into the East Coast in 2003, the Kunta-Kinte Alex Haley Memorial was almost completely underwater. Only the top of Haley’s head peeked out.

“When the water rises above my uncle’s head, that’s very disconcerting,” said Chris Haley, the nephew of Alex Haley and the director of the Maryland State Archives’ Study of the Legacy of Slavery in Maryland project.

“It’s not just disconcerting for me,” he said, “but for anybody who feels that the monument speaks to so many individuals who also emigrated here or were involuntarily brought here, such as many enslaved Africans were.”

The Kunta Kinte-Alex Haley Memorial was a long time in the making.

After the success of the “Roots” TV miniseries, a group of civil rights activists proposed a memorial to then-Annapolis Mayor John Apostol in 1978. But Apostol opposed the idea because Kinte was not a Marylander, The Baltimore Sun reported in 1999.

When Richard Hillman was elected mayor in 1981, he agreed to install a plaque in a ceremony that Haley attended. But two days later, vandals stole the plaque and left a card saying, “You have been vandalized by the Ku Klux Klan.” The Maryland KKK denied involvement in the incident, and city officials replaced the plaque a few months later.

In 1995, the Annapolis business owner Leonard Blackshear founded the Kunta Kinte-Alex Haley Foundation and raised $750,000 for a statue of Haley. The statue was finally unveiled in 1999 — more than 230 years after Kinte arrived in Annapolis in chains.

Blackshear told The Baltimore Sun before his death in 2006 that Haley exemplified the “American phenomenon.”

“Alex symbolizes that it’s not how you came to America, but how you end up,” he said. “His ancestor came here as a slave, and Alex became an internationally known writer. Many African Americans have a tendency to run away from their heritage because they think it’s just slavery, but he ran toward it and found international fame.”

Patsy Blackshear, the wife of the late Leonard Blackshear and a member of the board of directors of the Kunta Kinte-Alex Haley Foundation, told E&E News the statue was inundated during Hurricane Florence in 2000.

“The flooding was so bad that the water came up to Alex’s neck, and there were actually people kayaking downtown,” she recalled.

Blackshear said it’s important to preserve the memorial from floodwaters and other threats because it commemorates the many anonymous African Americans who were brought to Annapolis against their will.

“Kunta Kinte was the only named slave that was identified,” she said. “His name is known because of Alex’s research. But many other slaves came to these shores, and they were lost in our history in terms of who they were.”

The Union of Concerned Scientists, an environmental group, included the Kunta Kinte-Alex Haley Memorial in a 2014 report titled “National Landmarks at Risk: How Rising Seas, Floods and Wildfires Are Threatening the United States’ Most Cherished Historic Sites.”

“There’s just a visceral irony of seeing sea-level rise inundate a statue that’s trying to tell a story about our history,” Brenda Ekwurzel, director of climate science at UCS and a co-author of the report, said of the memorial.

“There are many ways to erase history,” she added. “There are deliberate ways of not telling all these stories. But with climate change, there’s also a real risk of erasure in the physical sense.”

Local officials and volunteers are working on short- and long-term solutions to the climate risks facing both the cemetery and the memorial.

Unlike the Annapolis National Cemetery next to Brewer Hill, where the federal government covers maintenance costs, or St. Mary’s Cemetery across the street, where the church includes maintenance in its budget, Brewer Hill is completely dependent on donations from the descendants of those buried there.

After receiving a $100,000 grant from Maryland officials, the Brewer Hill Cemetery Association has been soliciting further donations at bake sales and other events. The money is used to maintain the grass, fix fallen headstones and combat soil erosion.

“The only person I know who gets paid is the gentleman who cuts the grass,” said Harris, the president of the association.

In addition, the climate lawsuits filed by Annapolis and Anne Arundel County against fossil fuel companies could result in money for protecting the cemetery. But the litigation could be delayed for several years by procedural wrangling over whether it belongs in state or federal court.

Alan Hyatt, the founder of the real estate firm Hyatt Commercial, which owns the building across the street from Brewer Hill Cemetery, has also been working to install stormwater runoff treatment pipes.

Hyatt didn’t respond to interview requests for this story, but he told Annapolis’ Capital Gazette in 2019 that a pipe would extend above-ground to prevent damage to burial sites.

“From my non-engineering view, we might have to do everything above ground to avoid running into grave sites. We are working hard trying to come up with another angle to help with a solution,” he said.

Meanwhile at the Kunta Kinte-Alex Haley Memorial, city officials have installed a pump system to combat the sunny-day flooding at City Dock. Annapolis Mayor Gavin Buckley has also approved a $40 million plan to install floodgates and raise the entire dock by 6 feet.

Chris Haley, the nephew of Alex Haley, also sits on the City Dock Action Committee, which is carrying out the $40 million plan. He said local leaders have a responsibility to combat climate impacts in Annapolis before it’s too late.

Preservation of African American cultural landmarks is crucial because they serve as reminders of U.S. history and commemorate the contributions of the people they memorialize, Haley said.

“It’s at a point where people in the future could ask, ‘Who was around when there was a chance to do something and didn’t do anything?'” he said.