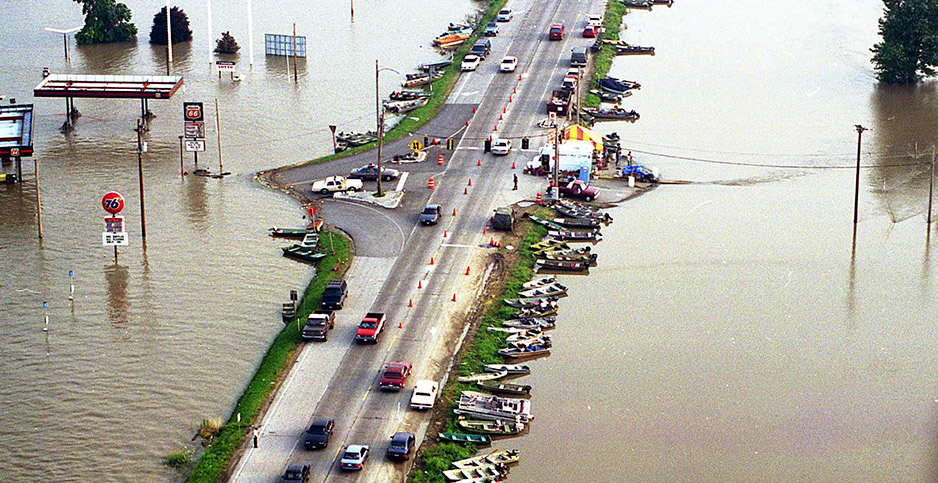 U.S. Highway 67 near West Alton, Mo., was used as a marina during the Great Flood of 1993. The Army Corps of Engineers is revisiting its response to that historic disaster. Bill Greenblatt UPI Photo Service/Newscom

The Army Corps of Engineers is looking into strengthening flood control along the Missouri River in response to the record deluge this spring and criticism that the agency is not doing enough to protect communities.

The Army Corps is considering realigning its levees along the Missouri and expanding or building new systems such as floodways, easements and retention basins to capture more floodwater, Maj. Gen. Scott Spellmon, the agency’s deputy commanding general for civil and emergency operations, said in an email to E&E News.

"Levee realignment" involves moving and reshaping levees so they better control rising waters. Building or expanding other flood controls would involve working with communities to find and access land.

The Army Corps also is working with Congress and the administration to get money and the authority to study "how we can better improve flood control on the lower basin" of the Missouri, which has been heavily flooded since mid-March, Spellmon said.

"Our intent would be to outline the alternatives, seek public comment and take those recommendations to the administration and Congress for consideration," he said.

Republicans and Democrats in Congress have pressed the Army Corps in recent weeks to better protect communities along the Missouri — the nation’s longest river — particularly in the heavily flooded states of Nebraska, Kansas, Iowa and Missouri.

Sen. Chuck Grassley (R-Iowa) criticized the agency for not prioritizing flood control over its other river-management goals such as protecting fish and wildlife, generating hydropower, and promoting commerce and recreation. Congress requires the Army Corps to consider eight factors, including flood control, without prioritizing any of them except during a major flood, when the Army Corps emphasizes protecting life and property.

"The No. 1 priority of the Corps should be flood control, period," Grassley said at a Senate hearing April 17 in Glenwood, Iowa, a city of 5,300 people that was nearly covered in floodwater in early April.

Sen. Kirsten Gillibrand of New York, who has been spending time in Iowa as a Democratic presidential candidate, called the Army Corps "too slow, too bureaucratic" and said at the hearing that the flooding "has made it very clear that the Army Corps must do better." Gillibrand said the agency needs to "build better flood protections that take into account all current and future risks, including climate change."

But some flood-control experts say an emphasis on strategies such as building levees increases the potential harm to people and property because protective structures encourage nearby development and provide a false sense of security. The Army Corps controls the Missouri River through six dam-and-reservoir facilities in Montana and the Dakotas that capture runoff from the upper section of the river and through a series of levees built primarily in Nebraska.

"That’s what led us into this problem to begin with — dams and levees," said Larry Larson, the co-founder and director emeritus of the Association of State Floodplain Managers. "It’s a mindset that we’ve got to get rid of."

Larson added: "’Just protect us’ doesn’t work. We can’t protect you from everything. Once an event exceeds the protection standard, your damage is going to be worse than if you had no protection at all because if you didn’t have development, you wouldn’t have property at risk."

AccuWeather has estimated the damage from the flooding of the Missouri and Mississippi rivers at $12.5 billion. The flooding was triggered by heavy rain and warm temperatures that melted snowpack.

Gerald Galloway, a civil and environmental engineering professor at the University of Maryland, said a broad, national strategy is needed to guide flood protection along the Missouri River. When he was Army Corps brigadier general, Galloway led an interagency committee that studied the devastating Midwest floods of 1993.

Several key recommendations of Galloway’s Interagency Floodplain Management Review Committee were never approved or enacted, most notably a new law to define the responsibilities of federal, state and local governments, including the levee districts that build and maintain locally funded levees.

"We still need some fundamental document that explains what we’re trying to do and who’s got what responsibility. We struggle over who’s in charge," Galloway said.

A national floodplain law would require and inspire communities to do more to provide protection from the Missouri River.

"Some people would rise to the occasion. They’re doing very little now and they would recognize they’re the ones who have to do it," Galloway said.

At the Senate hearing in Iowa, Spellmon of the Army Corps said he had been reviewing the 272-page interagency report, published in June 1994.

"It’s time to revisit some of these recommendations that have been brought forward to the [Missouri River] basin before," Spellmon said. "The solutions to further reduce flood risk on the upper basin and lower basin are not new. They’re on the books. It’s simply a matter of getting alignment with the competing interests on the upper basin and lower basin, industry, 29 tribes and everyone else that has a stake in water on this basin."

The Army Corps tried to resurrect some recommendations from the interagency report in 2011 after severe flooding in the Midwest. But that effort "did not receive traction," Spellmon said in his email to E&E News.

"The 2011 flood was much different from this year’s event," he said, "and these recommendations require difficult tradeoffs and decisions from the region."