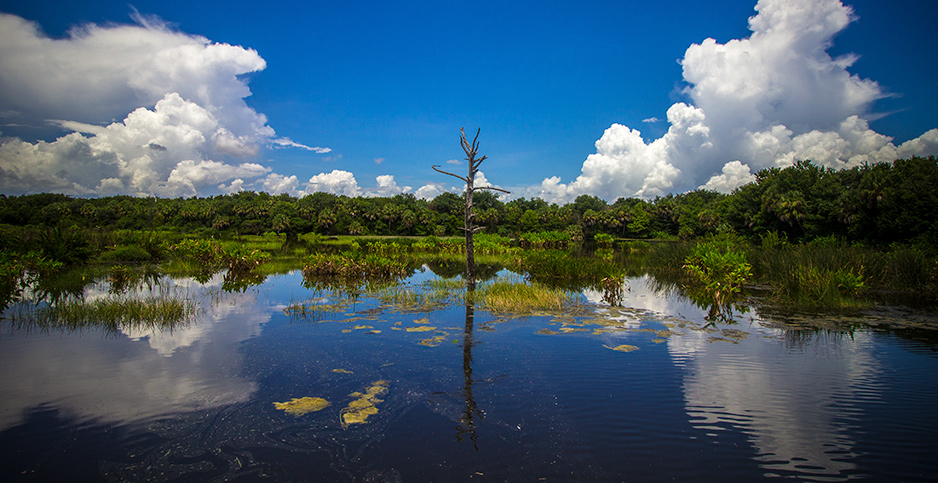 Florida — home to the Everglades and sprawling wetlands, marshes and bogs — wants to become the third state in history to take over the federal government’s job of overseeing wetland and water permitting under the Clean Water Act.

Environmental groups in the Sunshine State warn such a handover could pull back critical federal oversight for fragile ecosystems.

Republican Florida Gov. Ron DeSantis submitted a request to EPA Region 4 this summer, asking for the agency to grant the Florida Department of Environmental Protection permission to take over the Section 404 program.

Developers of real estate, energy projects, agricultural activities, shoreline restoration and even boat ramps use the program to obtain permits for discharging dredge or fill material into wetlands and streams that fall under federal jurisdiction. Developers of projects that affect state and federal jurisdictional wetlands or surface waters must currently obtain both a state permit and a Section 404 dredge or fill permit.

"I fully endorse the Florida Department of Environmental Protection’s assumption of this program and respectfully request that you approve the application," DeSantis wrote in an Aug. 18 letter to Mary Walker, administrator of EPA’s Southeast Region 4.

EPA is now holding public hearings on the request, will take comment through Nov. 2 and plans to make a decision by Dec. 17.

Under the Clean Water Act, states or tribes can seek to take over permitting and administering the Section 404 program. Before approving such a request, EPA must determine if a state has a sufficient program to implement and enforce the federal 404 permitting program.

To date, only Michigan and New Jersey have done so. The Army Corps of Engineers retains permitting authority throughout the rest of the country, and EPA reserves the power to veto those permits.

But Beth Alvi, director of policy for Audubon Florida, said she’s concerned water permits would receive less rigorous reviews and attention if EPA’s oversight were to fall away, including application of the National Environmental Policy Act and the resulting environmental impact statements included in permits — and the public comment periods they receive.

What’s more, Alvi said the Department of the Interior’s Fish and Wildlife Service hasn’t signed off on the state’s memorandum of understanding included in DeSantis’ proposal, a document that lays out which entities are responsible for managing various parts of the Section 404 program. Alvi also said DEP’s program for mitigating the loss of wetlands from development, climate change and other threats isn’t protective enough and those lands are actually being lost, even as the state agency in recent years has cut staffing and resources in its regulatory programs.

"We have concerns that a program that needs tightening up is assuming this larger workload, and DEP has not asked for any additional resources, not in terms of funding or staffing," said Alvi. "They’ve said they’re moving 18 staff from other programs into this, but then how are the other programs going to function?"

The Florida DEP, which has said assuming oversight of the Section 404 program will result in a more streamlined process, didn’t immediately respond when asked how assumption of the program would affect permits for Everglades projects and concerns about loss of federal oversight.

The agency in a blog post explained that a bill was passed through the state’s Legislature two years ago that gave the Florida DEP authority to begin the public rulemaking process to "better protect the state’s wetlands and surface waters by assuming the federal dredge and fill permitting program under section 404 of the federal Clean Water Act within certain waters."

The DEP argued that allowing the state to assume that authority would streamline the process and ensure federal and state requirements are addressed through state permits. The regulated community would also have more certainty and the state would have great control over its natural resources, the agency said.

"Assumption would result in significant efficiencies for permittees and allow better engagement with the public, all while rigorously protecting the environment," the agency wrote.