Florida refuge gets reinforcements as it cleans up from Ian 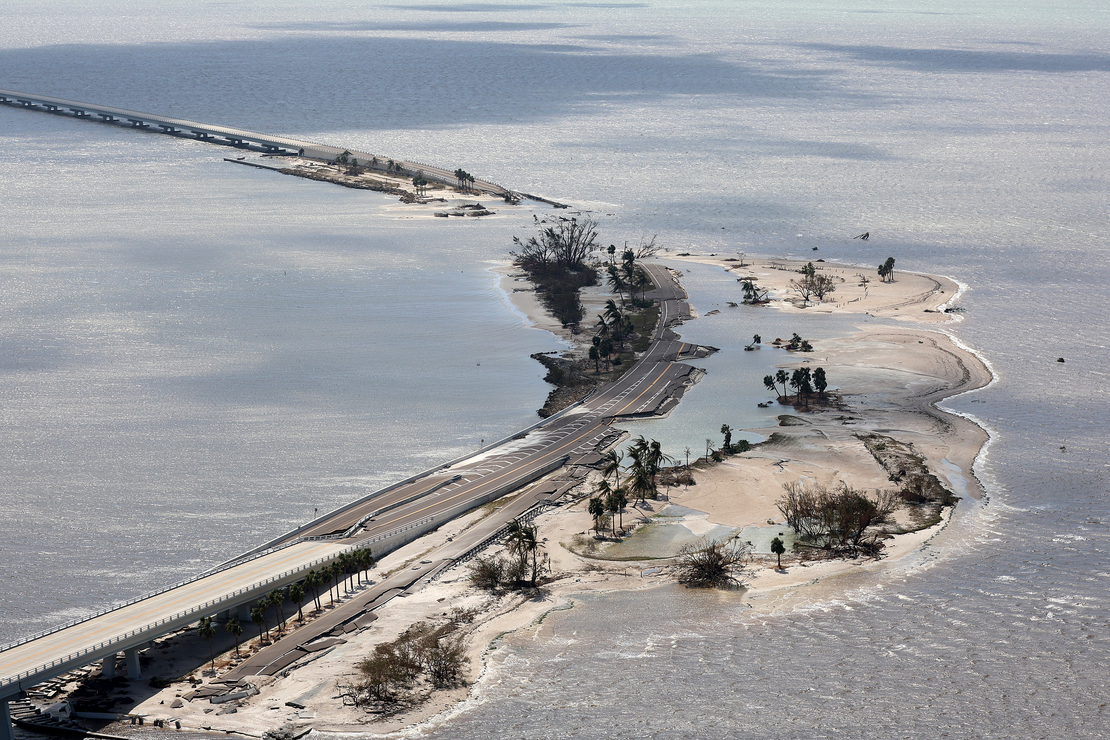 In this aerial view, parts of Sanibel Causeway in Florida are seen washed away along with sections of the bridge after Hurricane Ian passed through the area on Sept. 29. Joe Raedle/Getty Images

A convoy of some 350 trucks, trailers and first-responder vehicles crawled Tuesday across the temporarily patched 3-mile causeway to reach Sanibel Island. The causeway, which took a direct hit from Hurricane Ian last month, won’t be fully open to the public until Oct. 21, while island repairs will stretch out for a long time to come (Greenwire, Oct. 3).

“For those of you who have been out on this island, you’ve seen concrete poles and utility poles snapped in half,” Florida Gov. Ron DeSantis (R) said at a news conference . “That’s actually a pretty common sight to see. And so it’s going to take a lot of manpower.”

Toni Westland, supervisory refuge manager at the “Ding Darling” refuge, said in an interview broadcast Tuesday on the Utah-based KPCW radio station that officials have been following a storm plan inspired by the experience with Hurricane Charley in 2004.

Westland said she has bicycled about the refuge to check out how it fared, while contractors have deployed barges. She’s found trees stripped, but still living.

“What does concern me is the flooding,” Westland said, while adding that “we’re still assessing the wildlife.”

Lee County, in which the refuge is located, reports having identified 5,034 homes destroyed and 12,815 homes having suffered major damage. This has directly affected the refuge and its advocates.

As of yesterday, the Florida Medical Examiners Commission reported that there were 103 Hurricane Ian-related deaths, of which 52 were in Lee County.

The “Ding” Darling Wildlife Society and the Sanibel-Captiva Conservation Foundation, among other Sanibel Island-based outfits, report that a number of their staffers were rendered homeless by Ian. The organizations are now scrambling to find temporary housing.

“These individuals, many with families, are the backbone of our islands and help make Sanibel and Captiva that special and happy place for all of us,” the wildlife society states on its website.

The organization adds that “prices for rents still being charged are the traditional pre-hurricane seasonal rates and this is impossible for our employees to afford.”

The wildlife society is a nonprofit “friends of the refuge” organization similar to those established for other national wildlife refuges. It raises money and in other ways supports the “Ding” Darling refuge, which attracts upward of 1 million visitors annually.

The refuge is alongside the Gulf of Mexico on Florida’s west coast, and protects part of what the Fish and Wildlife Service calls the “largest undeveloped mangrove ecosystem” in the United States. Mangrove trees grow in brackish water and can stabilize coastlines.

The refuge was established in 1945 to safeguard the wildlife habitat of Sanibel Island and provide respite for migratory birds. In 1967, the refuge was renamed for conservation pioneer Jay Norwood “Ding” Darling, whose old house is now part of the refuge and has survived past storms.

“I have yet to hear how it’s standing in this hurricane,” Westland said in the KPCW interview.

The crews who have been working on the refuge report finding some satisfaction with the sightings of favorite species. The wildlife society noted, for instance, that “most exciting was the sight of a healthy and active gopher tortoise.”

As it happened, the gopher tortoise sighting occurred at about the same time as the Fish and Wildlife Service announced this week that it had determined the eastern population of the tortoise did not need Endangered Species Act protection despite threats posed by extreme climate conditions.

“Climate change has the potential to negatively impact habitat through … increased flooding due to predicted increases in the severity of hurricanes,” the Fish and Wildlife Service said in a Federal Register notice, adding that this flooding will cause the abandonment of “gopher tortoise burrows, particularly those in coastal ecosystems.”

Meanwhile, a video posted on the “Ding” Darling refuge’s Facebook page shows trees and signs down and a dock seemingly shattered but also a heavy-lift helicopter bringing material and three bald eagles aloft as if heedless of the travails below.

“It’s going to take a lot of effort,” DeSantis said of the Sanibel Island cleanup, “but it’s something that will be done.”