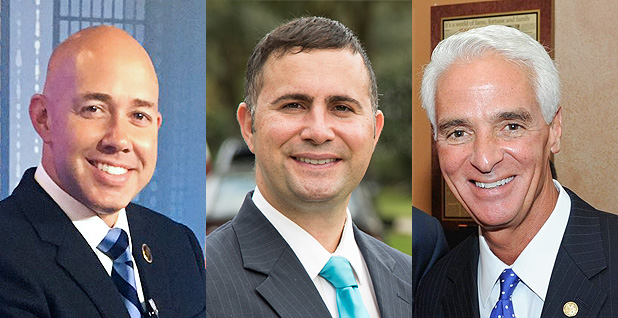 Florida, a state dealing with rising sea levels and where climate change is a hot-button issue, has sent a mixed bag of 10 new congressmen — representing climate advocates and deniers and representing both sides of the aisle — to Capitol Hill.

Former Gov. Charlie Crist, a Republican-turned-independent-turned-Democrat who ousted one of the few GOP lawmakers who supported the notion that global warming is caused by humans, said he is looking for ways to "reduce emissions generally" while serving in the House, a feat he acknowledged would be more challenging with President-elect Donald Trump in the White House.

"But you know, I’m always hopeful and I hope that we’ll have the opportunity to open the eyes of some," Crist told E&E News during this week’s traditional welcome program for freshmen learning the ropes of Capitol Hill.

The hotly contested swing state also sent some climate skeptics to Congress, in addition to progressive greens who may find it harder to work with the Republican majority.

State Rep. Matt Gaetz (R) won the Panhandle-based seat of retiring Rep. Jeff Miller (R) on a conservative platform, promising to fight against what he called the Obama administration’s "job-killing" executive overreach. Gaetz campaigned on the concept that environmental regulations are killing business.

Gaetz did not respond to an inquiry about his energy and environmental policy priorities, but he expressed support for offshore drilling during the campaign.

During a primary debate, Gaetz referred to himself as a "never say never guy" on the subject of drilling in the eastern Gulf of Mexico. "It would be shortsighted to say we will never extract another drop of oil," Gaetz said, according to the Northwest Florida Daily News.

Gaetz has also expressed uncertainty about whether global temperatures are rising naturally or if humans are contributing to climate change.

Panama City surgeon Neal Dunn takes over for Tallahassee Democrat Gwen Graham, who decided not to run for a second term after the district was redrawn to favor Republicans.

Dunn was a big supporter of Trump and, like Trump, has described himself as a pragmatic conservative.

On climate change, Dunn said during the campaign that human activity plays some role but that he does not think the science is clear on how much.

"What I do know is that the United States should not follow the path of the global warming alarmists like the Obama administration who wants us to unilaterally handicap … industry with overburdensome EPA regulations. That will only further empower China, who is actually the largest polluter in the world," Dunn told the Panama City News Herald during the campaign.

Rutherford, the establishment-backed favorite, defeated environmental engineer Dave Bruderly (D), who ran on a platform of conservation and climate action.

Rutherford, who said he believes the climate is changing and already sees the impact of sea-level rise in northeast Florida, said he questions the cause.

"Climate was changing before we had carbon emissions … I need to be convinced how much of that is man and how much of it is just the global climate conditions," he said this week in an interview.

Rutherford plans to make helping residents who were hit by Hurricane Matthew his first priority in Congress. He identified restoring beaches, dredging and looking at ways to make the shores more resilient by building barriers as potential solutions.

Rutherford also said he wants to look at the regulatory process. Congress is falling short in its duties by allowing executive branch agencies to write significant regulations, he said. "We need to pull those things back into the Congress so that they can be vetted properly," he said.

On his third try for a job in Congress, state Sen. Al Lawson (D) won a seat representing North Florida.

After 28 years in the state’s Legislature, Lawson takes the seat of embattled Rep. Corrine Brown (D), who is facing federal charges of conspiracy and fraud with a trial set for next April (Greenwire, July 8).

Lawson won endorsements for his strong record on environmental conservation, yet he campaigned on a moderate approach of safeguards that would allow industry to thrive.

Lawson sponsored legislation to create a land preservation program and crafted legislation to protect the Apalachicola Bay. As governor, Crist appointed Lawson to serve on the Energy Action Team that worked to develop a long-term climate action plan for the state.

After the 2010 BP oil spill, Lawson asked the governor to call a special session so that the state could pass an amendment permanently banning "near-shore" drilling around the coast. He also asked Congress to suspend all deep-water drilling in and around the Gulf of Mexico.

Lawson will be a new member of the Congressional Black Caucus.

In Congress, Murphy has said permanently extending tax credits for wind and solar energy would be a top priority.

The League of Conservation Voters endorsed Murphy in her bid to unseat the former chairman of the House Transportation and Infrastructure Committee (Greenwire, Aug. 15).

Soto becomes the first Puerto Rican to represent the state in Congress.

Last year, the Audubon Society awarded Soto its "Champion of the Everglades" award for his work in the state Legislature. Soto said he hopes to be appointed to committees "where I can continue to hold the baton on environmental issues."

"Global warming exists and is caused by our society, and so we have to, in a deliberative fashion, try to advance renewable energy, energy efficiency and conservation but in a way that we actually can get something done here," Soto said.

Under the GOP, Soto said tax credits and other "free market" options may be the most feasible way to advance those priorities.

Former Orlando Police Chief Val Demings (D) claimed victory in the redrawn 10th District, with the backing of green groups including the League of Conservation Voters and Sierra Club.

Demings has promised to address climate change and fight to protect Florida’s natural resources. As police chief, she led efforts to make the police department’s car fleet more efficient, built a LEED-certified gun range and reduced the agency’s carbon footprint, according to LCV.

Demings stumped with members of the Congressional Black Caucus during the campaign.

Crist identified climate change as a "huge issue" both in the state and in the St. Petersburg-area district he will represent. He said the peninsula is directly affected by rising sea levels.

While serving as governor from 2007 to 2011, Crist drafted a series of executive orders on climate, convened a summit on the issue and blocked construction of a proposed coal-fired power plant near the Everglades. However, he dropped most of his environmental initiatives in his unsuccessful bid to serve in the U.S. Senate, a race in which he ran first as a Republican then as an independent.

Crist said climate work will be "more challenging," under Trump, though he is hopeful others will be awakened to the urgency of the crisis.

Mast said protecting the region’s waterways would be a top priority, as he campaigned in a region hard hit by algae blooms.

For his time in Congress, Mast sees climate change as a priority and is interested in solutions where he may be able to find common ground with moderates.

His predecessor, Murphy, joined the caucus pushing a "Noah’s Ark" approach to climate, and Mast said it’s "very likely he will do the same."

Mast did not want to specify his views on a carbon tax, one route the caucus has identified. He plans to meet with Curbelo, one of the co-founders of the bipartisan Climate Solutions Caucus, to look "at a 30,000 foot level everything that’s associated with this."

"Even though we know we find ourselves ideologically aligned … we can also see where we find the common ground on the specific policy points of it and how we can move forward together," Mast said in an interview.

Rooney told E&E News in a brief interview that restoration of the Everglades and cleaning up the water in South Florida will both be a priority for his time in Congress.

Rooney campaigned on the promise to bring an "outside voice" to Washington.

His spokesman said he did not have time for a longer interview this week.