Foes in bitter Ala. GOP primary agree they hate EPA 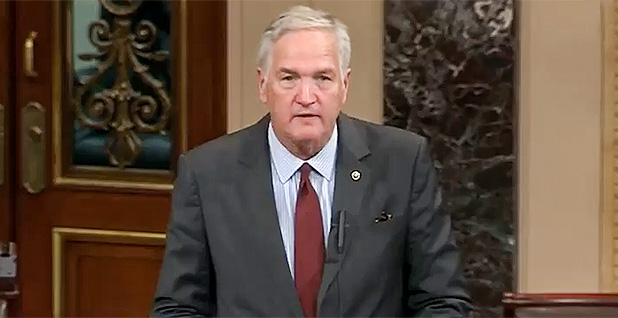 There’s a reason for that, according to Stefanie Francisco, communications director for Conservation Alabama: Voters already know where the GOP candidates stand.

The front-runners in the race align on issues like offshore drilling, mining and environmental regulation rollbacks, according to Francisco, who works for the state branch of the League of Conservation Voters.

"It’s definitely not a central issue," she said.

Personal attacks and clashes over conservative credentials have defined the race so far, with vicious volleys flying between the campaigns of appointed Sen. Luther Strange and Rep. Mo Brooks.

Strange blasts Brooks for criticizing President Trump in 2016. Brooks fires back touting his conservative voting record and noting the circumstances of Strange’s appointment to the Senate.

Strange was chosen by former Gov. Robert Bentley (R), who resigned under a cloud of scandal last spring. He appointed Strange, then the state attorney general, which brought accusations of a backroom deal.

So far, neither Strange nor Brooks has attacked Roy Moore, the former state Supreme Court justice and conservative icon who is also in the Senate race.

The first public polling shows Moore and Strange neck and neck. Thirty-five percent of respondents backed Strange, with Moore just behind at 33 percent. Brooks trailed with 16 percent. The survey had a 2-point margin of error and was conducted by Strategy Research for the Raycom News Network. It sampled 3,000 registered voters on July 24.

Brooks, Moore and Strange are the easy favorites in the primary field of nine. Hard-line conservatives with broad state name recognition, the three will compete for the top two spots in the Aug. 15 contest. None is expected to gather the majority of the vote needed to win outright. The top two vote-getters would advance to a Republican runoff on Sept. 26.

Whoever takes the nomination will bring a strong anti-regulatory stance to the Dec. 12 general election.

Brooks, Moore and Strange are avowed critics of federal agencies, claiming they stymie economic growth and intrude on states’ rights. Each frames U.S. EPA as emblematic of the problem.

On his campaign page, Moore states, "We need to foster development of our own natural resources involving nuclear, solar, wind and fossil fuels. Coal mining and oil drilling should be encouraged, subject only to reasonable regulations."

Brooks has a long anti-regulation record in Congress. He has been a vocal supporter of the Trump administration’s regulatory rollback efforts and voted to kill Obama-era rules using the Congressional Review Act. A longtime backer of space exploration funding — NASA has a major facility in Huntsville, Ala. — he opposes space agency spending tied to climate research.

"The EPA’s job-killing agenda undermines America’s economy while driving up the cost of living for struggling American families," he said in a June 2016 House Science, Space and Technology Committee hearing.

"The EPA is a bogeyman in the race as usual," Francisco said.

That’s particularly true for Strange. Of the three, the former attorney general has the longest history with energy and environmental issues, and he often touts his legal challenges to EPA and the Clean Power Plan as attorney general while campaigning.

"Luther fought the Obama administration’s overreach all the way to the Supreme Court, defending Alabamians from big government intrusions by career politicians and bureaucrats," reads his campaign website.

Strange was one of 27 state attorneys general to sue the Obama administration over the landmark climate measure. In December 2016, he joined 23 other attorneys general in a letter to the Trump transition team describing how to dismantle the CPP using executive orders, rulemaking and legislation.

Strange also headlined a lawsuit by more than a dozen states against an Obama-era expansion of Endangered Species Act protections and joined Texas Attorney General Ken Paxton (R) on behalf of Exxon Mobil Corp. in 2016, challenging a subpoena that directed the company to disclose what and when the company knew about climate change.

"He’s shown a willingness to challenge any move by the federal government at environmental enforcement at the state level, often from a states’ rights perspective" said Nelson Brooke of Black Warrior Riverkeeper, an Alabama environmental group.

Strange embarked on many of these lawsuits with U.S. EPA chief Scott Pruitt, then Oklahoma’s attorney general. The two are longtime allies. They co-wrote an op-ed in the National Review that called the climate change debate "far from settled," a phrase Democrats used to attack Pruitt during his confirmation hearing.

Nearly every energy dollar donated to the race has gone to Strange. Employee political action committees from industry heavyweights like Exxon Mobil Corp., Chevron Corp., Tesoro Corp., Halliburton Co., ConocoPhillips Co., Anadarko Petroleum Corp. and others have donated money to the campaign. Neither Brooks nor Moore has received any money from a major national oil and gas company, according to FEC filings.

The mining industry has deep Alabama roots. Birmingham, the largest city, was once the industrial hub of the southern United States, with vast deposits of iron ore, coal and limestone.

While coal is on the wane as market forces boost natural gas and renewables, coal-production companies like Drummond Co. Inc. and utilities like Alabama Power — a branch of the Southern Co. — and the Tennessee Valley Authority retain political heft in Alabama.

As attorney general, Strange was known as a coal supporter, and industry interests have been generous in the Senate primary. Alabama Power’s employee PAC gave Strange $10,000 this spring, according to FEC documents. Drummond’s equivalent contributed $5,000 to the campaign committee in December, while he was still attorney general. Drummond Coal Sales President George Wilbanks provided the maximum individual donation of $2,700.

Alabama Power has given $5,000 to Brooks over the course of the campaign. Moore has not received energy PAC donations so far. Their campaigns did not respond for comment on coal policy.

Like his predecessor Sessions, Strange supports Pruitt’s efforts to slash EPA regulations, ease regulations on utilities and work with state agencies. Strange said he backs a May rule revision that made coal ash dumping standards more flexible (E&E Daily, May 2).

"I look forward to working with EPA Administrator Pruitt on extending the Coal Combustion Residuals Rule compliance deadlines and continuing our efforts to jump-start America’s energy economy," he said.

Alabama Power says it will cap about a dozen toxic ash ponds. The utility gets about half of its power from coal and called it a "significant part of our diverse supply of energy sources," according to The Birmingham News in May 2016.

Strange’s coal connections have hurt him in recent weeks. A state representative recently told federal investigators that Drummond officials offered him a bribe in 2014 in exchange for fighting the EPA designation of a Superfund site near Birmingham, according to an article in the Alabama Political Reporter.

State Rep. John Rogers (D) said Strange was in the room when the bribe was offered. The article noted that Drummond gave Strange $75,000 in campaign contributions over 2014-15.

Drummond was later named partially responsible for the pollution.

But yesterday, the Project on Government Oversight released a report linking Strange and Sessions to the scandal. The watchdog group demanded that Strange recuse himself from voting on Trump’s nomination of Jay Town to be U.S. attorney for the Northern District of Alabama because that office is running the bribery investigation (E&E News PM, July 31).

"Our fear is that he’s going to continue his track record, which is to not place clean water protections as a high priority," said Mitch Reid, then the program director at the Alabama Rivers Alliance, a water resource nonprofit.

Strange was attorney general in 2010 when more than 215 million gallons of crude oil poured from the breach at BP’s Macondo well in the Gulf of Mexico, devastating coastlines, including Alabama’s. The area has not recovered.

In the subsequent case against BP, Strange served as coordinating counsel for the plaintiff states. In total, BP will pay more than $60 billion in damages, fines and cleanup costs. The state of Alabama will receive several billion dollars from a variety of settlement avenues.

"He did a good job for the state," Francisco said. "He represented the state well and helped get the coastal recovery money."

Not all agree. Others say Strange made no attempt to direct funds from the main settlement, a $1 billion payment to Alabama from BP, to coastal restoration and environmental causes. The majority of the dollars went to state debt payments, highway projects and Medicaid, the critics say.

And while Strange may have prosecuted BP as Alabama’s top cop, his overall enforcement record was poor, according to Keith Johnston, managing attorney for the Southern Environmental Law Center.

"In my view, during Strange’s tenure as AG, there was never a focus on environmental protection in the state," he said.

As several advocates noted, litigating against BP does not stop Strange from supporting offshore drilling.

"I share the Trump administration’s goal of strengthening the United States’ position as an energy superpower by pursuing a new five-year program on lease sales, enhancing opportunities for exploration, leasing and development of new energy sources," Strange said in a statement to E&E News.

The Brooks and Moore campaigns did not respond to questions on energy policy. Brooks has voted to expand offshore oil exploration in the past, and Moore is a staunch fossil fuel advocate. Both reject established climate change science.

"It’s taken for granted that that’s what we do in Alabama: We drill offshore," Francisco said. "That’s not going away anytime soon. I don’t think that’s even up for debate."