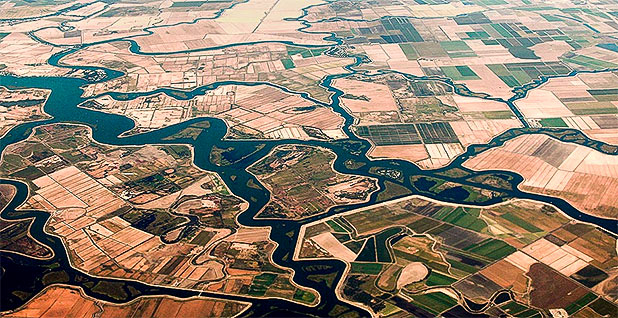 The Sacramento-San Joaquin River Delta is a key part of the Central Valley Project and an important source of water in California. formulanone/Flickr

At issue is a proposed deal between Westlands, an agricultural powerhouse in California’s San Joaquin Valley, and the Bureau of Reclamation in which Westlands pays off its debt to the government to guarantee deliveries in perpetuity without future contract renewals.

In October, Westlands filed a motion in state court that would establish a judicial decree that such a contract is valid under state law.

The groups, counties and tribes, which include the California Sportfishing Protection Alliance, the Center for Biological Diversity, San Joaquin County and the Winnemem Wintu Tribe, contend that the proposed contract deserves more scrutiny given California’s uncertain water future.

Westlands seeks the order from the court "despite continued failure to address longstanding drainage problems affecting water uses in the district, and unresolved uncertainties in the water baseline for Westlands’ current and future uses," wrote attorneys for San Joaquin and Trinity counties.

"Prematurely validating the broad relief sought by Westlands in the face of these uncertainties would create major risks for other water users and uses far beyond Westlands’ own service area," they wrote.

The details of the contract seeped out in late November and quickly became a flashpoint in California’s water battles.

Interior has cast it as a good deal, under which Westlands would repay its costs of the Central Valley Project, the sprawling federal infrastructure that delivers water from California’s wet north to farms and cities in its drier south.

As of Sept. 30, 2018, Westlands owed $480.7 million, and Interior said the contract would result in the district paying it off a decade earlier than anticipated (Greenwire, Nov. 8).

The contract was made possible by a provision of controversial legislation enacted at the end of the Obama administration, the Water Infrastructure Improvements for the Nation (WIIN) Act.

Critics, however, contend that the permanent contract would allow Westlands and Interior to avoid public scrutiny and environmental reviews that are often a part of the contract renewal process.

They have also pointed out that Interior Secretary David Bernhardt was a registered lobbyist for Westlands up to November 2016, including on issues related to Reclamation and the Endangered Species Act.

When he joined the administration, Bernhardt signed an ethics pledge committing to not work on any "particular matter" related to his lobbyist activities two years prior. Critics have claimed he has violated that pledge, and Interior’s Office of Inspector General has "opened an investigation" into those alleged activities (Greenwire, April 16).

Interior has also emphasized that the proposed contract has been available for public review since Oct. 25, and the agency will receive public comments on it.