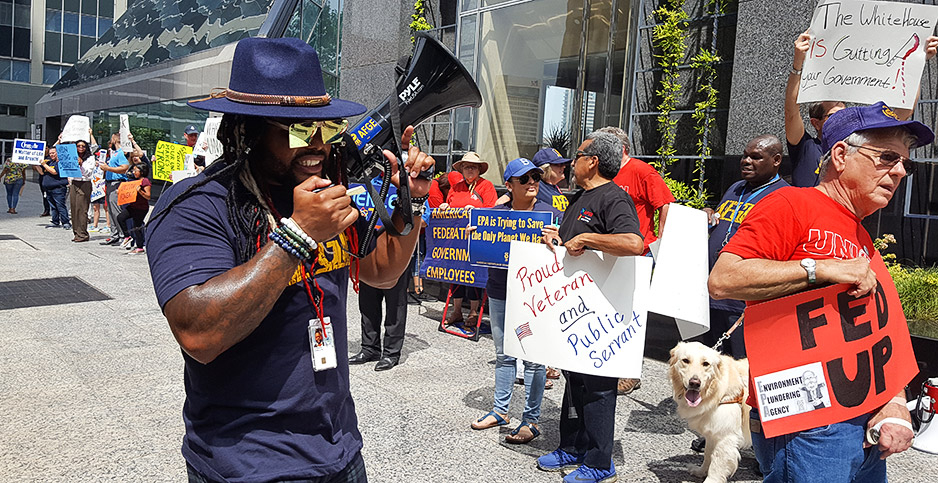 Dorelle Harrison leads a group of union members in a chant outside EPA Region 6 headquarters in Dallas. Mike Lee/E&E News

Much of EPA’s workforce is adjusting to new limits under a contract imposed by management.

Some of the more sweeping changes required under the contentious deal — covering over 8,000 EPA employees represented by the American Federation of Government Employees Council 238, the agency’s largest union — came into place this week. EPA has defended the move to institute the contract, saying it came after years of stalling over bargaining by the union and ultimately a breakdown in talks this June. The union said EPA hasn’t negotiated fairly.

Union officials have moved out of EPA office space across the country, turning over keys and sending boxes into storage. Employees have changed their work schedules, cutting back on telework and figuring out who can pick up their kids, and when.

The process has not been a quiet one.

An EPA employee unfurled a banner to protest the contract while on stage with Administrator Andrew Wheeler during an awards ceremony in Washington, D.C., last month. Further, AFGE local unions representing EPA employees have organized rallies in cities like Chicago, Boston and Philadelphia to blast the contract since the agency began implementing it July 8.

In addition, more than 40 federal employees gathered in front of EPA’s Region 6 office in Dallas yesterday, holding signs and chanting slogans like "Hey, hey, ho, ho, union-busting’s got to go."

Dallas has a relatively high number of government workers. In addition to the EPA regional headquarters, it’s home to large contingents from the Education and Labor departments, among others.

The FBI, the Securities and Exchange Commission and other federal law enforcement agencies maintain big staffs, clustered around the federal courthouses in Dallas and neighboring Fort Worth.

About half the people at the demonstration appeared to be employees of other agencies, including the departments of Education, Labor and Homeland Security, who said they were concerned about the Trump administration’s handling of union contracts across the government.

At yesterday’s rally, Jeanne Schulze, president of AFGE Local 1003, was heartened by turnout from other federal colleagues.

"We’re all pretty much in the same boat," she said.

Her union represents about 285 employees who work in the EPA Region 6 branch.

Rick Levy, president of the Texas AFL-CIO, said the federal employees are under a broader assault by the Trump administration on the rights of rank-and-file workers in both the public and private sectors.

"They’re trying to take our voice, our work out of the equation," Levy said. "This president is like a kidney stone — this, too, shall pass."

EPA staffers said the new contract, which requires them to report to their work site four days per week, has limited telework and forced them to adjust their child care schedules and other life arrangements.

Paul James, a field quality manager in the regional office, said he works from home once a week. He uses the time he saves on commuting to volunteer for a nonprofit group. Teleworking can be more productive than working in the office, he said, since many of the regional staff are in cubicles and are interrupted by co-workers’ phone calls.

Dorelle Harrison, a scientist in the EPA Region 6 office, said he works from home two days a week, which allows him to care for his children. He moved to Dallas three years ago and said the benefits were a factor when he chose between EPA and other federal jobs.

The contract has other bad provisions, Harrison said, including limits on how employees can file grievances.

"If you have a bully supervisor, you can’t fight back," he said.

Others at the agency expect to see less of their families under reduced telework.

"We won’t have as much family time during the week. We will also be using a lot of our sick leave now to get our kid to his medical appointments," said one EPA employee. "The new directive has caused a lot of stress and uncertainty for us and killed our morale."

In response to questions from E&E News for this story, EPA shared a timeline of its negotiations with AFGE that started in 2010. The agency has sought to renegotiate the 2007 contract and reached agreement with the union in 2016, but AFGE failed to ratify the deal.

"Since then, there has been a lengthy, complicated history of setbacks resulting from AFGE’s bad faith delays and unsuccessful litigation attempts," said an EPA spokeswoman.

Since May last year, EPA has wanted to bargain the full contract with AFGE. But actions by the union this June, including declining to negotiate ground rules for talks, led to the current impasse, said the EPA spokeswoman.

"AFGE walked away from the bargaining table," said the agency spokeswoman, leading EPA to give notice that it would implement the new contract on July 8 to replace the old one, "as is the Agency’s right following the Union’s refusal to bargain."

AFGE, however, wants EPA to return to the negotiating table.

"We have asked EPA to go back to the table and bargain a lawful agreement. Thus far, they have not agreed to do so," an AFGE spokesman told E&E News. "They continue to move forward with stripping employees of their rights and changing their work schedules, among other anti-worker actions."

AFGE has also filed an unfair labor practice complaint with the Federal Labor Relations Authority. The AFGE spokesman said the FLRA is investigating the charge, and there is no time frame for that investigation.

Meanwhile, employees must make do under the new contract.

"There are people in my bargaining unit who are making life decisions, like where to buy a home and settle their family, and those decisions are being upended by this directive," said Bethany Dreyfus, president of AFGE Local 1236, which represents EPA Region 9 employees in San Francisco, adding that management is "trying to make our work lives untenable."

"This is yet another distraction from our actual work. It takes us away from protecting human health and the environment, which we all are committed to doing," Dreyfus said.

EPA has offered training to its managers and supervisors — essentially the frontline staff who will have to enforce the new contract for employees under their watch.

Internal records obtained by E&E News showed the extent of workplace changes under the deal. EPA also acknowledges it moved forward on the contract without the union’s blessing in the documents, even using the term "unilaterally" adopted by the agency’s critics.

"AFGE was afforded the opportunity to negotiate an entire new contract for more than a year, and when AFGE refused to come to the bargaining table, the Agency ultimately implemented the Contract unilaterally," EPA stated in an answer it included in a list of frequently asked questions.

Pop culture references are scattered throughout a PowerPoint presentation for managers on the contract, including pictures of Homer Simpson, Dwight Schrute and Michael Scott. Dwayne Johnson, shown as wrestling superstar The Rock with one of his popular lines, "Know your role," makes an appearance, too, reminding supervisors of their responsibilities.

The grievance process is more limited under the new contract, including 30 matters excluded from grievance, like decisions on incentive pay, performance ratings and telework. According to another slide in the PowerPoint presentation, managers are told the contract was drafted "to promote an efficient and effective government," which "streamlines management decision making (and in many cases, makes management decisions unreviewable)."

"This is going to be a challenging change for EPA — and we appreciate your support and patience as we implement the contract," the presentation says at its conclusion. "THANK YOU!"

An EPA crosswalk shows the scope of that challenge, highlighting changes between the old and new contracts, including for grievances, official time and leave.

"The contract provides more accountability and efficiency in dealings between the union, employees and management, consistent with the direction set by the Administration," said the EPA spokeswoman. "The contract was designed to benefit both EPA employees and the American public, and still includes workplace flexibilities and options for union representational activities."

At EPA, managers, like employees, were unsettled when the agency moved forward on the new contract.

"It was tough that first week, because the manager corps was pretty ticked off since this was sprung on us," one EPA manager told E&E News. "We have had to guess at the why and who. That has never been put out there, even for the highest level of management."

Still, that source said, the manager’s staff has come to accept the new contract. Subordinates got their new forms in on time this week, as required by the contract.

"It was swallowed. I don’t hear much more grumbling," said the EPA manager. "While staff realized the agency made a pretty bold move here, they’re also wondering, what did the union do to get them to this place?"

AFGE has set up a webpage to generate a campaign specifically against EPA’s new contract.

Along with talking points and flyers, visitors are given templates to write an op-ed or a rally press release. In addition, there are scripts for those in and outside EPA to call Wheeler and complain about the contract.

"I am outraged by the EPA’s recent decision to unilaterally impose changes to our contract," reads one, saying the "management edict" takes away their rights and will hamper recruitment and retention of EPA employees.

The union is also looking to lawmakers to block the new contract at EPA.

In a separate set of talking points distributed to AFGE members this week, the union calls on Congress to include language in the final funding bill for fiscal 2020 that could bar the deal at EPA and similar contracts at other agencies.

That spending bill, passed in June, includes a provision that would withhold funds from enforcing collective bargaining agreements "not mutually and voluntarily agreed to by all parties to the agreement." A House Democratic aide told E&E News the provision could potentially bar EPA’s new contract (Greenwire, July 12).

Congress is currently on recess but will return in September. Lawmakers then will have to pass funding legislation by the start of the new fiscal year on Oct. 1 to keep the federal government open.

Meanwhile, union officials have moved out of their EPA office space.

Nicole Cantello, president of AFGE Local 704, which represents EPA Region 5 employees in Chicago, told E&E News that on Wednesday, her union moved 30 boxes and its popcorn maker from the agency to the offices of the Illinois Sierra Club.

Dreyfus said, "We also had to turn over the keys to our bulletin board, which was our way of communicating with our bargaining unit employees."

Dianna Myers, president of AFGE Local 534, which represents EPA Region 4 employees in Atlanta, said her union moved materials from its office space into storage. Employees are upset over changes to telework and a dearth of answers from management, she said.

"The fact that the agency has left employees with no voice, they feel broken," Myers said.