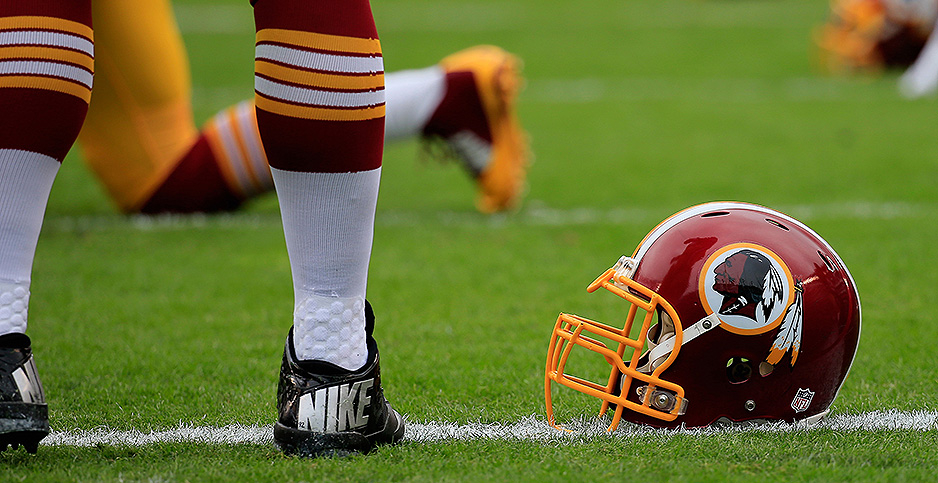 A Washington Redskins helmet is seen on the field before a football game in 2014. Rob Carr/TNS/Newscom

The name "Redskins" uncomfortably endures across the U.S. landscape even though it’s no longer affixed to Washington’s struggling football team.

While the team bowed to pressure and announced today that it would drop the offensive moniker, Redskin Mountain still rises to 8,770 feet in Colorado. Three other geographic features in the state also share the name: a mine, a creek and a gulch.

A Redskin Lake in Minnesota, a Redskin Brook in Indiana and, as part of the football team’s infrastructure, a Redskins Park or two in Northern Virginia also pop up on the revealing database maintained by the U.S. Board on Geographic Names.

"Native Americans have faced racism since before our country was even founded, and today is a chance for all of us to reflect on the many other ways we’ve done them harm and can start to make amends," said Rep. Raúl Grijalva (D-Ariz.).

Sen. Tom Udall (D-N.M.), vice chairman of the Senate Indian Affairs Committee, added that "the name change is a welcome but long overdue step forward. Now, the franchise has an opportunity to hear from and involve Native Americans in the process of renaming the team, to ensure that they don’t make the same mistake twice."

In its no-frills announcement today, the football team said simply that "we are announcing we will be retiring the Redskins name and logo upon completion of [a] review" that began July 3.

Chair of the House Natural Resources Committee, Grijalva added that "this change ends one instance of associating Native men, women and children with fundamentally racist branding, but there are many other instances, and the people responsible for them need to make the same change."

These other instances, dispassionately enumerated by the geographic names database, range from Dead Injun Creek in Oregon to numerous Squaw canyons, creeks and peaks nationwide. There are some 64 Squaw Lakes and 28 Squaw Mountains identified in the United States.

"Because geographic names are part of the historical record of the United States, the BGN prefers to proceed cautiously with regard to the use of names in everyday language, as attitudes and perceptions of words considered to be offensive can vary among individuals and communities and can change connotation over time," the board’s policy states.

Proposals to change names considered to be offensive must meet the same basic criteria of any other name proposal and are processed using the same procedures as other name changes.

In fiscal 2019, the multiagency Board on Geographic Names considered 165 domestic proposals, of which 138 new names and changes were approved and 27 were disapproved.

Last month, for instance, the board cited state and local opposition in voting 14-2 to reject a proposal to change Alaska’s Chinaman Lagoon to Aurora Lagoon.

"Members stated that they would be in favor of changing the name to one that had local support and with the input of local Alaska Native groups," the board meeting minutes stated.

Currently, the board is reviewing a proposal from the Forest Service and the Fond du Lac Band of Lake Superior Chippewa to change Minnesota’s 44-acre Redskin Lake to Memegwesi Lake. The word "Memegwesi" refers to small mythical woodland creatures in Ojibwe tradition and throughout the Anishinaabe tribal groups.

"Band members go there to hunt, trout fish, and trap and say that this lake is a special place," a Forest Service letter stated.