For climate voters, the future is female 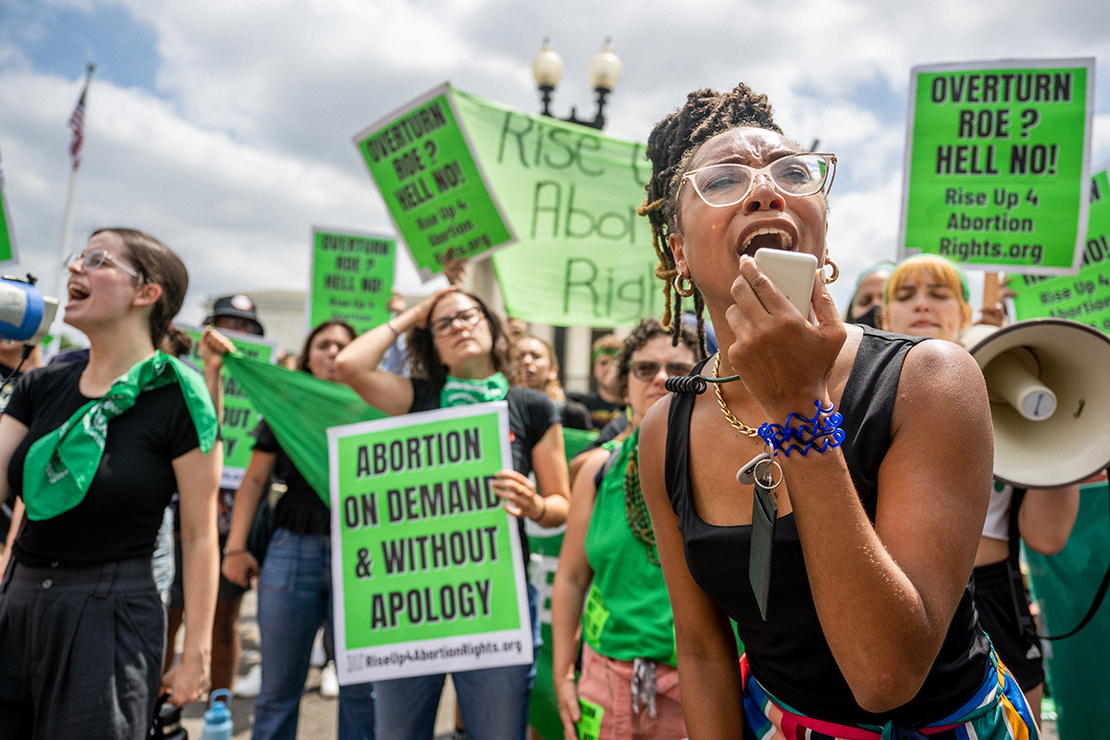 The Supreme Court’s explosive decision on abortion rights may trigger a secondary boom of climate voters in the midterm election by driving more women to the polls.

Election officials have reported a surge in female voter registration in the nearly 12 weeks since the high court decided Dobbs v. Jackson Women’s Health Organization. The June 24 ruling reversed decades of legal protection for abortion rights and prompted at least 17 states to ban or restrict the procedure.

Since then women have registered to vote in droves across the country, including in key swing states such as Pennsylvania, Michigan, Wisconsin and Ohio, according to research from TargetSmart, a data and polling firm. In many states, Democrats have a clear advantage over Republicans in signing up new registrants.

Democratic officials such as Rep. Pramila Jayapal of Washington said they are hopeful the trend could help tilt the political environment in their favor and drive a suite of progressive policy changes.

Jayapal said swing voters often are framed as white, conservative Democrats. But she argued these newly energized voters represent a different bloc that can be brought into the party long-term. Even though these voters have felt ignored by Democratic leaders in the past, she said they are fired up by the Dobbs decision as well as recent efforts by Democrats to address climate change and student debt.

“I see these as our base voters who don’t always vote. These are young people, women, folks of color — this is the base of the Democratic Party,” said Jayapal, who chairs the Congressional Progressive Caucus. “Now, we’re talking to them about what matters, and they will stay with us for a long time once they get engaged.”

The rapid pace of female voter registration isn’t limited to swing states. It’s also happening in deep red states such as Idaho, Kansas and Louisiana. And the trend already is making an impact. Kansas voters last month soundly defeated a ballot measure to restrict abortion rights. Before Dobbs, women in Kansas had a three percentage point advantage in new voter registration over men. After Dobbs, and ahead of the Aug. 2 vote, women expanded that registration advantage to 40 points.

Younger women are driving much of the increase.

In 45 states, the majority of new registrations have been women, TargetSmart found. In 31 of those states, a disproportionate share were women under the age of 25. Female voters under 25 — those fueling the increase in registrations — are far more likely to be concerned about global warming than previous generations and rank climate action as a voting priority. That’s true not just for Democrats, but independents and Republicans as well.

Depending on the state, women are 15 to 20 points more likely to be climate voters than men, said Nathaniel Stinnett, founder and executive director of the Environmental Voter Project, citing his organization’s research.

He said anger is consistently the most motivating factor for voters, followed by excitement. Recent events have produced both. The Dobbs decision has prompted a rise in female voter registration, often out of anger. And climate voters are excited Democrats finally passed a major bill to cut greenhouse gas emissions, he said.

“If you put those things together, post Dobbs, post Inflation Reduction Act, there are a whole lot of people who were disappointed or unmotivated and now they are both angry and excited at the same time,” he said. “That’s a recipe for a huge jump in turnout.”

Women are more worried about climate change than men, and the difference is acute among independents who often decide tight elections, according to a study published last year by George Mason University and Yale University.

American politics has shown that voters generally support a suite of interrelated policy proposals from one party, said Ed Maibach, director of George Mason University’s Center for Climate Change Communication. To win elections, there must be one primary issue that drives voter turnout. But the entire suite of values also plays a role, he added.

For voters who care about abortion rights, climate is part of that suite of issues, he said.

“Climate has not been one of those highly activating issues as, clearly, abortion is now thanks to overturning of Roe v. Wade,” he said. “That’s the thing that’s going to get people to the polls in droves, it should express itself in terms of picking candidates who are more likely to support climate action.”

The trend could prove pivotal in swing states that will help determine control of the U.S. Senate.

In Pennsylvania, before the Supreme Court rolled back reproductive rights, Democrats had a four-point advantage over Republicans in registering new voters. After Dobbs, that edge soared to 30 points, largely driven by women under the age of 25, TargetSmart found.

Polling consistently has shown that Pennsylvania Lt. Governor John Fetterman (D), a supporter of abortion rights and stronger climate policy, has a commanding lead over Republican Mehmet Oz in their race for Senate. Democrats would gain a Senate seat if Fetterman wins, with current Republican Sen. Pat Toomey retiring.

“Women are the reason we can win,” Fetterman said last weekend at a rally in suburban Philadelphia that was packed with female abortion rights supporters. “Don’t piss women off.”

In Wisconsin, women have out-registered men by 15.6 percentage points since the Dobbs decision, TargetSmart found. Fifty-two percent of newly registered voters since Dobbs are Democrats, and just 17 percent are Republicans.

It’s a similar story in Michigan, where women have out-registered men by an 8.1 points. There, Democrats have 18-point advantage over Republicans, TargetSmart found.

In Ohio, women have an 11-point advantage over men and most are under the age of 35, TargetSmart found. And 82 percent of those voters are from urban and suburban areas, which are both more likely to be concerned about climate change than rural areas.

There is no precedent for such a wave, Tom Bonier, TargetSmart’s CEO and a Democratic political strategist wrote in a New York Times op-ed earlier this month.

“In my 28 years analyzing elections, I’ve never seen anything like what’s happened in the past two months in American politics: Women are registering to vote in numbers I’ve never witnessed,” he wrote. “I’ve run out of superlatives to describe how different this moment is.”

It’s unclear if the current cycle of polling has accounted for a possible wave of female voters, much like polling ahead of the 2016 and 2020 election didn’t fully account for a boom in Republican voters, Bonier noted.

When it comes to climate, women know more about climate science and are more worried about it than men, according to research from Aaron McCright, a sociologist at Michigan State University who is an expert on political polarization around climate change.

After another summer of droughts and heat records, moderate voters who see climate impacts on television or experience it firsthand will continue their yearslong shift toward more aggressive policy action, he said. A key part of that group — suburban women — have played an outsize role in the last two presidential elections, he said.

Now, that same group of voters is being animated by the Dobbs decision, he said.

“They’re also going to be left-leaning on a wider range of issues, for education, for social security, for environmental protection, for dealing with climate change,” McCright said. “There could be positive spillover effects for bringing in people who want to do something more on climate change and want to push that agenda further.”

Abortion is clearly a powerful motivator for Democrats, said Dana Fisher, director of the Program for Society and the Environment at the University of Maryland and author of “American Resistance: from the Women’s March to the Blue Wave.”

But concern about abortion access also is likely to draw in climate voters, she said. Fisher said many of those who support abortion rights also consider climate a top three issue. So, mobilizing them as an electoral force could help push politicians take more forceful positions on cutting greenhouse gas emissions.

“There are a suite of issues that are mobilizing people, and people who are mobilized around reproductive rights very much are also concerned about climate and systemic racism,” she said, adding “There also are certain types of activities they do and voting is certainly one of them.”