For power sector, uncertainty remains over pace of change 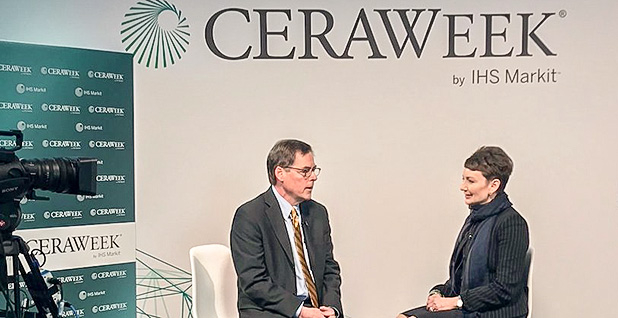 HOUSTON — As CEO of an electric company, Pat Vincent-Collawn is well-aware that her industry is part of an unfolding transformation.

Just don’t expect her to predict a timeline for something as significant as energy storage.

"If I knew exactly which technology was going to win and by when, I would not be here," the chief executive of PNM Resources Inc. said yesterday. "I would take all of my money and go invest in that."

Vincent-Collawn’s comments came on the fourth day of this year’s CERAWeek by IHS Markit, an energy conference that covers everything from oil and gas to power and batteries. The gathering this week has featured oil executives who downplayed the idea of rapid change in transportation as well as Mary Barra, CEO of General Motors Co., who spoke about an expected rise in electric vehicles. Change is coming, but the timing remains great fodder for debate.

Speaking from personal experience, Vincent-Collawn said electric cars are "fabulous." She said there needs to be work to lower prices, while more charging stations are needed. The CEO, who is chairwoman of the Edison Electric Institute, said utilities can help with this charging infrastructure expansion through partnerships. Still, she doesn’t see a high level of electric vehicle penetration where she lives in New Mexico for some time.

Edison International CEO Pedro Pizarro said challenges related to electric vehicles may touch on when and where vehicles charge, with a need to manage enhancements to the distribution grid. Pizarro suggested that California could see at least 7 million light-duty electric vehicles by 2030 as it pursues green objectives.

Electric vehicles will make inroads even in Texas, according to Scott Prochazka, CEO of Houston-based CenterPoint Energy Inc. A traditional truck owner who travels hundreds of miles to a ranch in West Texas may not buy on the front end, he said. But Prochazka expects to see a rise in urban cores in terms of electric vehicle adoption.

In 10 years, Vincent-Collawn said her industry’s business is going to be much more about customer choice and innovation. There’s still a need for reliable, clean and affordable energy, she said. But customers will want to be more interactive. She said the utility can be a convener and form partnerships.

The ‘speed of regulation’

Later in the day, Geisha Williams, CEO of California-based PG&E Corp., lamented the potential for some people who produce power to zero out power bills by selling excess electricity. She said a different revenue model is needed that more appropriately values the grid.

That would mean different rate programs and ways of compensating and charging for the value of the grid, she said. Williams said it’s not about stopping choice, but rather to enable it.

Lynn Good, CEO of North Carolina-based Duke Energy Corp., said her company believes in a lower-carbon future and has been moving to retire older coal units while looking to use some gas and renewables. Good said the company has reduced carbon dioxide emissions over 30 percent from 2005, with more reductions expected.

"We will check and adjust depending on what the state policy or the federal policy is, but I’m a firm believer that we have to keep going no matter what’s happening" in the political world, she said.

In an interview, CEO Thad Hill of Houston-based Calpine Corp. said humility is needed looking forward because the energy world largely failed to anticipate the massive change from shale, which remade the outlook for natural gas.

"My view is that we’re going to have less baseload, more wind, more renewable, the existing gas fleet will be required," he said, and there may be "load growth surprise to the upside."

He said grid batteries may proliferate in some areas but may be largely niche during his working career. There may be some peak shifting aspects, he said, but extreme events are a different situation for storage.

"It can’t play the critical role in the grid for reliability I believe that a lot of people" are talking about right now, he said. "I think it’s a little ahead of itself."

Vincent-Collawn outlined a desire to look at pilot projects and keep up with research. Gas will remain part of the power mix at this point, she said. Vincent-Collawn said people wonder about 100 percent renewables along with storage.

"And you try to have the technical discussion about why that doesn’t work right now," she said, and "they assume you’re just a stodgy, old utility that doesn’t want to give up your coal plant or your gas plant." She said she doesn’t want calls when the lights aren’t on.

Uncertainty also can be found in wholesale markets and various U.S. power grids.

"It’s been 20 years, haven’t we figured this out yet?" CEO Bill Magness of the Electric Reliability Council of Texas asked yesterday as he recalled a recent conversation.

Magness said there’s a continual evolution with many "injection points" around state and federal policy that add to the idea of markets with competition and least-cost, reliable dispatch.

Gordon van Welie, CEO of ISO New England Inc., told reporters about his region’s insufficient infrastructure to supply gas generation. He said states have a decision to make of whether to help facilitate investment directly in relieving pipeline constraints. Or, if not, maybe there’s a need for more dual fueling, gas imports or renewables.

"In terms of our fuel security issues, we are years away from solving it," the CEO said. The first step is a market signal, he said, followed by waiting to see what the market does with that.

Resilience remains a common theme in power circles after Energy Secretary Rick Perry’s request for changes to help struggling units fueled by coal and nuclear. While the Federal Energy Regulatory Commission didn’t accept that plan, it is undertaking a look at grid resilience.

On Wednesday, FERC Chairman Kevin McIntyre told a CERAWeek crowd that the compensation aspect is "tricky and critical." He said if power plants aren’t being compensated for resilience-focused contributions, then that’s of concern to FERC because of an obligation to ensure just and reasonable payment.

McIntyre told reporters the grid resilience proceeding is likely to lead to some change.

"Only hypothetically is nothing an option," McIntyre said. "I will be very surprised if we go through all that process and take no action."

And while trends may be toward gas and renewables, there’s also interest at the Department of Energy in the potential for new coal-fueled generation. The existing coal fleet is aging, Steven Winberg, DOE’s assistant secretary for fossil energy, said this week during a panel on carbon capture, utilization and storage.

"One thing we can do is develop the next generation of coal-fired power plants," he said.

Winberg said such projects might be more modular, perhaps in the 100- to 200-megawatt range and more efficient and flexible. Axios reported this week that the Trump administration was "set to ask companies to help the government develop small-scale coal-fired power plants."

In an interview, PNM’s Vincent-Collawn said there’s a sense that the grid is important to the new energy future. She predicted there still will be vertically integrated companies in five to 10 years. She said some markets won’t want to deregulate even as some have. She sees cleaner resources and future technologies "we can’t even imagine."

Calpine’s Hill said people can make educated predictions and have a view of what the next several years are like. And they make decisions.