For utilities, buried lines no ‘panacea’ to avoid outages 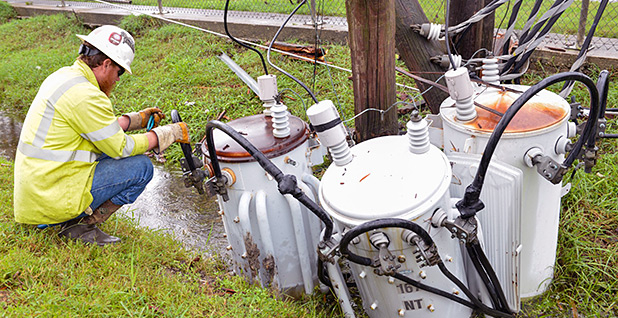 The underground power system in downtown Houston provided an oasis back in September 2008, keeping the lights on after Hurricane Ike plunged most of Texas’ largest city into darkness.

The lesson? There’s no silver bullet to prepare for severe weather and its toll on electric infrastructure, whether the discussion is on buried versus overhead lines, increased tree trimming or expanded use of concrete poles and flood monitors.

"After Ike, people were asking a lot about, ‘Why don’t we underground everything?’" said Steve Greenley of CenterPoint Energy Inc., which is responsible for the electric wires in much of the Houston area. "And we talked through the points that flooding does cause damage to underground things, and it may not always be the right solution.

"So we want to look for kind of the right solution to the right service in the right spot that’s most cost-effective for our customers," said Greenley, who is a vice president of distribution power delivery.

For CenterPoint, responding to Harvey meant restoring power to more than 900,000 customers. That was dwarfed by the roughly 2.1 million customers — or homes and businesses — who lost power in the company’s electric territory after Ike in 2008. Ike caused considerable wind damage in Houston, including knocking out a number of downtown windows.

He cautioned against using that to create any sort of blanket policies, especially after there’s been so much previous work on the power grid.

"It’s difficult to explain, ‘I know it’s bad, but it could have been so much worse,’" Gunn said. "That’s an argument that’s always lost on people — especially people who are a week in without power."

That becomes even tougher to answer when it’s hard to predict where a storm will hit. Irma, for example, joggled and wobbled to the point that one city was in its direct line of sight for a few days, and then that shifted to the west.

"So to say you can go back and prepare for a hurricane … it’s a crapshoot to say, ‘We’re going to do a one-size-fits-all,’" Gunn said.

Florida’s electric companies faced backlash from customers and elected officials after hurricanes in 2004 and 2005 led to hot, dark days. It was Hurricane Wilma, which tore across the state, taking thousands of wires, poles and transmission lines with it, that was the tipping point for most.

The state’s electric companies took steps to protect and harden their power grid after that. While some elected officials called for every power line to be placed underground, such knee-jerk edits never became official policy.

Now Florida’s electric companies, regulators and other stakeholders gather as part of an annual storm meeting to discuss what has worked and what hasn’t. That may be the most important result of those earlier hurricanes, said Kury, director of energy studies at the University of Florida’s Public Utility Research Center.

When it comes to whether underground lines helped, utility spokesman Robert Gould didn’t have any figures but relied instead on anecdotal evidence.

"We’re seeing benefits," he said during one of FPL’s daily storm briefings. He did warn that any areas that were flooded could have been damaged.

"’Litter on a stick’ is a good term for the makeshift, poorly constructed and unsightly tangle of overhead utility poles, wires and transformers that blemish the city’s landscape," Brown wrote, adding that CenterPoint’s power grid needed a major overhaul.

"Remember Ike, when the poles and wires toppled and the city went dark?" Brown wrote. "Even after costly repairs, paid for by rate increases, our grid remains extremely vulnerable to the next big wind storm. It’s a worn-out 19th century electrical infrastructure trying to serve a fast-growing 21st century city."

Tom Standish, then group president of regulated operations at CenterPoint, took issue with Brown’s comments in his own piece in the Chronicle several days later. Standish cited a potential price tag of $35 billion to put existing lines underground, while also noting that CenterPoint already had a good chunk of distribution infrastructure below ground.

"Whatever one thinks of the attractiveness of power lines, it is simply a fact that day-in and day-out, Houston’s electric grid continues to provide exceptionally safe and reliable electric service," Standish wrote. "At CenterPoint Energy, we think that is a beautiful thing."

CenterPoint appeared to do well restoring power after Harvey, given the company’s use of technology such as smart meters and better preventive efforts like tree trimming, according to Ed Hirs, an energy economist with the University of Houston. The city also benefited from the lack of a full-blown wind attack on Houston, he said.

In downtown Houston, flooding and disruption were focused in an area near the Buffalo Bayou. Water damage likely will keep some of Houston’s performing arts venues from operating normally for weeks or months, but many businesses in the area are up and running.

In Florida, the debate over placing power lines underground typically showcases two of Florida’s particular qualities: barrier islands and income disparity. For example, Palm Beach is highly susceptible to storm surge, which means it likely would require more time for power restoration after a storm that brings in a lot of flooding.

Yet the town — home to President Trump’s Mar-a-Lago — approved placing all power, telephone and cable lines underground in a project that started last month. It will cost about $90 million and is not without controversy.

Burying distribution lines is more complicated than just taking the overhead wire and putting it in the ground. Underground cables, perhaps 4 feet below ground, have to be insulated along their entire length, according to Rick Hartlein, director of Georgia Tech’s National Electric Energy Testing Research and Applications Center.

That transformer could get flooded during a storm surge, which could be strong enough to even move the equipment off of its pedestal. There’s potentially more resilience that comes with underground systems during storms, Hartlein said, and restoration could be faster if the cable isn’t damaged.

EEI’s Aaronson said topography, geography and vulnerabilities can all come into play when regions consider preferred resilience strategies. Issues in Florida include hurricanes and a high water table, while in parts of California, they can include earthquakes and wildfires.

"It’s a lot easier to restring a line than it is to reset a pole," Aaronson said.