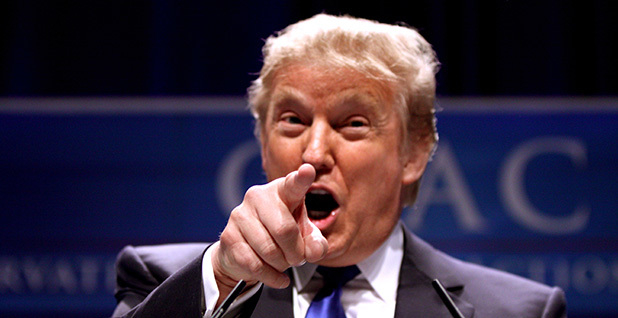 Ministers and ambassadors from around the globe yesterday tried to avoid talking about the possibility of Donald Trump being elected the next president of the United States. Photo by Gage Skidmore, courtesy of Flickr.

The Netherlands’ environment minister described Donald Trump’s views on climate change as "wrong" yesterday, hours after the celebrity businessman solidified his grasp on the Republican nomination for president.

A handful of other foreign officials also expressed concern about Trump’s dismissive comments on rising temperatures. Together, those worries might foreshadow international disagreements facing a Trump administration on an environmental issue that 195 nations recently pledged to address as a global threat.

The Dutch minister, Sharon Dijksma, said Trump has company among some of Europe’s conservative politicians who reject scientists’ assertions that the use of fossil fuels is behind the globe’s climbing temperatures.

"I’m not surprised that there are politicians who are still in denial — but they’re wrong," Dijksma said. "I mean, if you look to the evidence that a lot of scientists give us … there is even more reason for action and acceleration on action than ever."

That sentiment is not limited to Europe’s liberals.

John Selwyn Gummer, Lord Deben, a Conservative Party member of the British House of Lords, said that self-described conservatives who advocate policies that lead to resource waste should be "prosecuted for misusing the name" — a notion that is likely to be unpopular with the Republican Capitol Hill staffers whom he said he planned to meet with today.

"And to run a nation not believing the facts is extremely dangerous," he added.

Another international representative, Andrea Garcia Guerrero, Colombia’s director of economic, social and environmental affairs, said Colombians are surprised that some leaders in the developed world still question climate change. Agreement on the science is so prevalent in Colombia, she said, that unrelated events like earthquakes are sometimes blamed on it.

"I think there is a concern whenever you hear that there’s people who are influential who don’t believe that climate change is a human-caused phenomenon," she said.

Not talking about Trump, but …

Trump solidified his standing as the GOP standard-bearer in a cascade of events that began Tuesday night with his victory in the Indiana primary. He sewed up his surprising political rise to the nomination when Texas Sen. Ted Cruz ended his campaign, a move followed yesterday by Ohio Gov. John Kasich.

Trump has described climate change as a "hoax" and said it’s being perpetrated by Democrats and their clean energy allies to make money. He suggested that China is skirting international norms on the environment by using American coal to fuel industrial jobs, the kind that are being lost in the United States because of trade agreements that favor cheap labor overseas. Trump says clean air is one of his goals, but he says it can’t come at the expense of the economy (ClimateWire, March 21).

International officials appear interested in the race for president, though many of them suggest that the Paris climate agreement finalized in December could withstand the potential turbulence of a Trump presidency.

They say businesses are moving forward with clean energy technologies as a result of the Obama administration’s executive actions on climate, and because of tax incentives and other programs that encourage renewable energy. Others also say that Trump would face intense pressure internationally to abide by the global agreement.

"The work of the [federal] agencies is very well-established in the United States economy at the moment," Miguel Arias Cañete, the European climate and energy commissioner, said in an interview.

He declined to answer questions about Trump, but Cañete said it’s important for the United States to have a consistent approach to dealing with the long-term effects of rising temperatures. He and the other foreign officials were interviewed as they attended the Going Green Conference, hosted by the European delegation to the United States.

"It’s a challenge for the whole century, and you must make policy for future generations, not for getting some votes in the next election or to please some lobbyists," said Cañete. "You have to think what will happen to your country, the citizens of your country, in 30 or 40 years."

Then there are the electoral prospects. Clinton and her allies see an advantage in showcasing Trump’s climate views to turn out Democrats in November. Women, Latinos and younger voters are generally more concerned about the issue than other groups.

"Donald Trump has made clear that he has a total disregard for the crisis posed by climate change, as well as virtually all other essential environmental and public health protections — and those are just a few reasons we will be speaking out, organizing, and doing everything we can to stop Trump this election," Khalid Pitts, political director for the Sierra Club, said in a statement.

George "David" Banks, a former climate adviser under President George W. Bush, believes that Trump could agree to abide by the Paris Agreement before the general election — for a price.

Trump, the deal-maker, might use the climate agreement to leverage changes to existing trade deals, fulfilling campaign promises to slow the transfer of jobs from the United States to China and other nations, Banks said. That might involve a carbon tariff on U.S. imports. Such a fee could be seen as pro-jobs and pro-environment, a move that might dull Clinton’s likely attacks on Trump’s climate positions, Banks said.

"Imagine this, I’m working on climate change [for Trump] and I convince him and his team of pulling out of Paris and the U.N. Framework Convention," Banks said. "Then he finds out he could have used that for leverage on the trade side. He’d fire me. He’d call me and say, ‘You didn’t know that? You’re fired, Banks, get out of here.’"

Still others imagine a Trump presidency that would pull out of the climate agreement.

"There’s a lot of thinking in European countries about how to deal with a President Trump," said Nick Mabey, founding director of Britain-based Third Generation Environmentalism. "Everyone’s quite shocked and surprised that he’s being nominated."

Climate action in the states, in private-sector markets and, to an extent, within the federal agencies would continue, he said, even if it slowed under a Trump administration. The United States would lose clout within the global negotiations, but countries like China would step in to fill that vacuum.

"It feels like it will be a major setback, but it won’t stop everybody else acting, as it would have done 10 years ago," he said.

Dijksma, the Dutch minister, painted an optimistic picture in which businesses seek a carbon price to avoid a patchwork of climate regulations being enacted in U.S. states, Canadian provinces and stand-alone nations. She said that in time, the voice of business will drive lawmakers to adopt far-reaching climate policies.

But what about Trump? His popularity is built on the success of his businesses. Could he support a carbon price?

To this, Dijksma winked with her left eye, colored purple with eye shadow, and said, "I would think he would listen to his friends."