Forest Service mulls sales that could lead to slaughter 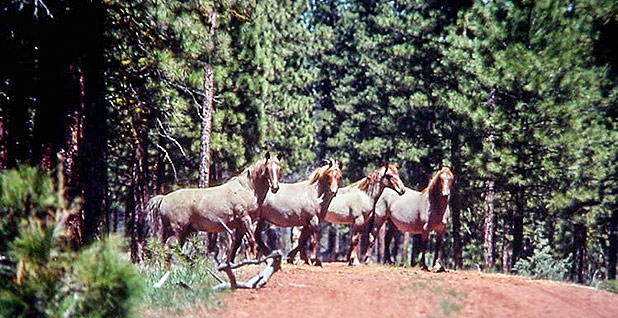 The Forest Service may sell about 165 wild horses currently in holding at California’s Modoc National Forest without limitations on the future use of the animals — even if that means some horses could end up in slaughterhouses.

The wild horses were part of a large group rounded up and removed from the national forest in October and November. About 250 horses were then transferred to a newly built corral — called the Double Devil Wild Horse Corral — on the Modoc site, instead of to a nearby holding facility operated by the Bureau of Land Management.

The distinction is significant. That’s because Congress for years has added provisions to Interior Department appropriations bills that forbid BLM from using euthanasia on healthy horses and burros and limit its ability to sell animals without limitations on their future use. But the appropriations language covers only Interior, and thus BLM; the Forest Service is under the Department of Agriculture.

Department of Justice attorneys representing the Forest Service in a lawsuit challenging the fall roundup at Modoc wrote in a court filing last month that the Wild Free-Roaming Horses and Burros Act of 1971 — the Nixon-era law governing the management of wild horses and burros on federal rangelands — "expressly allows" the agency to sell unadopted animals without limitation.

In essence, that means "the purchaser does not have to certify the uses of the horses" he or she buys, DOJ says in a Dec. 20 motion opposing a request by animal rights groups that the court issue an injunction against the sale of any of the rounded-up horses.

"That said, the Forest Service would not knowingly sell a horse that goes to slaughter for human consumption," says the document, first reported on by the Associated Press. "In fact, the Modoc, in its bill of sales form, identifies the California state law that makes it a felony for buyers to turn around and sell horses for human consumption."

In October, animal rights advocates — the Animal Legal Defense Fund, the American Wild Horse Campaign, and Carla Bowers, a Volcano, Calif., resident who has advocated for the protection of the Devil’s Garden herd — filed a lawsuit in the U.S. District Court for the District of Northern California challenging the Modoc roundup and the sale of any of those horses without limitation (E&E News PM, Oct. 22, 2018).

The Forest Service has not yet made a final decision on whether to offer the wild horses rounded up last fall for sale without limitation, according to the DOJ motion.

The service, according to the document, is "currently working to place" the 165 horses in the Modoc corral "through adoptions and sale with limitation."

If these efforts do not result in all the horses being adopted by Feb. 18, the document says, "the Forest Service will consider whether to implement the option of sale without limitation."

But the partial government shutdown that began last month is interfering with adoption efforts, the Forest Service said in a brief email to E&E News.

"During the lapse in funding we are not able to accept payment for adoption or sale of any horses and the facility is closed to the public," the statement said. "We will plan an adoption event soon after funding is restored."

It’s not clear how the shutdown’s impact on adoptions will affect the Feb. 18 deadline.

Wild horse and animal rights advocates say the new corral on Forest Service land indicates a decision already has been made.

Why else would the Forest Service build a corral at Modoc to hold a portion of the rounded-up horses if the intent is not to bypass congressional appropriations restrictions on unlimited sale, notes a Jan. 8 motion filed by plaintiffs’ attorneys in support of the injunction request.

The Forest Service usually transports rounded-up wild horses to a nearby BLM corral. Of the 932 horses gathered during the roundup last fall, it transferred about 250 animals to the new Modoc corral — presumably because they are older horses with less chance of being adopted.

The Forest Service told E&E News that about 86 of the horses at the Modoc corral "have found new homes through previous adoptions and sales."

A total of 653 horses were transferred to the nearby BLM holding facility, the DOJ document says, meaning those horses are subject to congressional restrictions on unlimited sale.

The federal government "cannot have it both ways" by building the corral at Modoc while insisting "to the Court that it has not yet made any such decision," the motion says. "In short, the record and Defendants’ own statements make clear that the decision to sell horses without limitation is final and judicially reviewable."

Indeed, DOJ indicates in the court motion that part of the Forest Service’s reasoning for building the corral at Modoc was to give itself the flexibility to conduct an unlimited sale, if necessary.

Even with the roundup last fall from the forest’s Devil’s Garden Plateau Wild Horse Territory, there are still about 3,000 excess wild horses on the territory, the document says. The Forest Service has determined the maximum number of animals the 258,000-acre wild horse territory can sustain is 402.

"The Forest Service realized that, over the long-term, it could not realistically address the overpopulation problem on the Devil’s Garden Territory while working in full partnership with BLM and being subject to BLM’s horse management restrictions," DOJ writes in the court document.

"While fully acknowledging the undesirable nature of euthanasia and sales without limitation, the Forest Service recognized that, under the current circumstances, all management tools provided by [federal law] must be available to successfully manage wild horses on Devil’s Garden Territory," they add.

Advocates fear that sales without limits on the future uses of the wild horses will lead the horses, eventually, to slaughterhouses in Mexico and Canada.

DOJ says in the court motion that such a pronouncement is "speculative, not concrete and imminent."

But it does not deny this could happen.

"To be clear, nobody, including the Forest Service, desires to be part of the destruction of healthy wild horses, but, at times, it may be the only way the statutory scheme, as written, can actually work," they write.

It remains unclear whether the Forest Service has indeed decided to proceed with the unlimited sale of the 165 wild horses at Modoc.

A DOJ spokesman could not be reached for comment. The Forest Service statement did not address the issue.

The debate over selling horses without limits underscores how federal land managers are struggling to address growing herd sizes on rangelands across the West.

BLM, in particular, is struggling to manage more than 82,000 wild horses and burros across roughly 27 million acres of federal herd management areas — about 55,000 more animals than the appropriate management level, which is the maximum number of horses and burros that regulators believe the rangeland can handle without causing damage to vegetation, soil and other resources.

BLM spends tens of millions of dollars every year to care for nearly 46,000 additional animals it has rounded up and placed in private holding pens and corrals. BLM has warned Congress that it could cost taxpayers $1 billion to care for these animals over their lifetimes.

The Forest Service manages about 8,000 wild horses and burros, and the service oversees most of its herd areas jointly with BLM.

The Devil’s Garden territory at Modoc is the largest wild horse herd the Forest Service manages in partnership with BLM.

Hope Woodward, rangeland program manager for the Forest Service’s Wild Horse and Burro Program, told members of BLM’s National Wild Horse and Burro Advisory Board at a hearing in October that the roundup of nearly 1,000 wild horses was badly needed to "sustain the natural ecological balance" in Modoc, noting the roughly 3,000 excess horses that remain.

Those excess horses, Woodward said, have already caused "significant damage" to the ecosystem at the Modoc wild horse territory, "and also to the horses themselves" by consuming limited vegetation and water.

Woodward added that it’s unlikely all of the nearly 1,000 horses, especially the horses that are 10 years or older and that are being kept in the corral at Modoc, will be adopted.

"Given that [the wild horse] population on the Modoc National Forest is expected to increase by 20 percent a year, it’s seen that it may be destructive [to the landscape] to actually return those horses not adopted to the territory," she said. "Some of these horses will be made available for sale."

While the purchaser of horses during such a sale "does not have to certify the uses of the horses," the recent DOJ document adds: "Such sales do not mean that there are no guidelines on who is allowed to purchase the horses or that the horses are treated inhumanely by the Forest."

It’s not the Forest Service’s intent to sell wild horses to slaughter.

Modoc National Forest Supervisor Amanda McAdams wrote in a separate Dec. 20 motion supporting the forest’s effort to reduce wild horse populations that there are "members of the public who are supportive" of unlimited sales, including "local ranchers."

"The activists seeking to prevent the Forest Service from exercising its statutory obligation to manage these horses have offered no alternatives," Lane told E&E News. "Perhaps if they spent a fraction of their litigation budget on adopting these horses, the population in the Modoc National Forest wouldn’t be 646 percent over the appropriate management level."

That’s the key issue with the wild horses at Modoc, DOJ says.

"The Devil’s Garden Territory now faces an overpopulation crisis and cannot support these horses," the DOJ court motion says. "With the current range conditions, the horses are starving, expanding beyond designated boundaries in search of food and water, and posing safety risks on local highways."