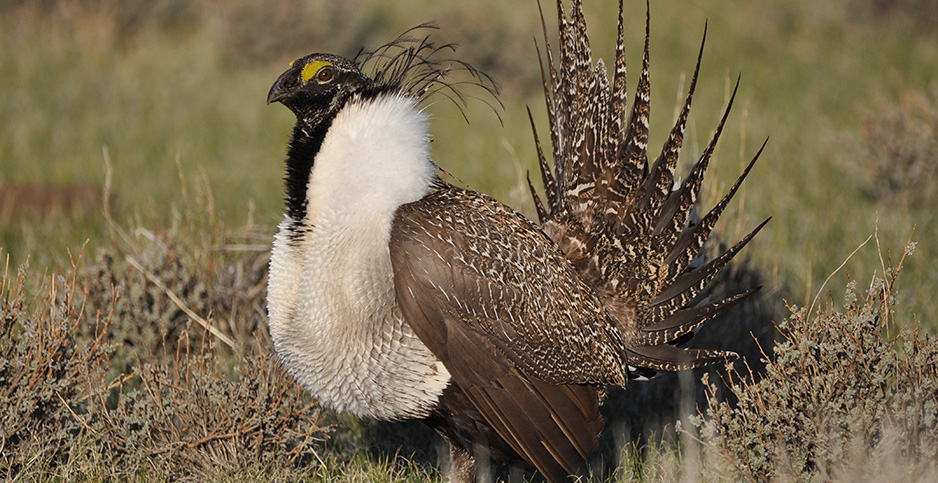 The draft documents will be open for a 90-day public comment period running through Jan. 3.

The proposed changes are not expected to be as sweeping as those put forth last spring by the Bureau of Land Management in six separate draft EISs and proposed resource management plan amendments covering tens of millions of acres of sage grouse habitat on federal lands.

John Shivik, the Forest Service’s national sage grouse coordinator based in Ogden, Utah, told E&E News today that the changes are designed to focus conservation efforts on the most important sage grouse habitat in the five states.

Shivik said the "preferred alternative" in the draft EIS will call for removing so-called sagebrush focal areas (SFAs), which were identified in the Obama-era plans finalized in 2015 as habitat critical to the bird’s survival.

Shivik said all the areas of SFAs that would be removed would still be protected as priority habitat management areas as outlined in the 2015 grouse conservation plans.

BLM has already taken steps to remove 10 million acres of sagebrush focal areas, though the bureau has also said most of these lands will remain protected as priority habitat.

"They’re not getting thrown out and getting nothing" as far as protection, Shivik said.

Another alternative, however, which is not the service’s preferred choice, includes removing 80,000 acres of general habitat management areas (GHMAs) that were designated in Utah in the 2015 plans.

That mirrors BLM’s proposal to remove 448,600 acres of GHMAs in Utah, with the lands reverting back to "whatever management criteria" were in place before the Obama-era plans were adopted, BLM’s draft EIS says.

BLM’s proposed changes, which have been roundly criticized by some elected leaders and conservation groups, are much broader than the Forest Service’s, covering more than 50 million acres. Among other things, BLM’s proposed changes outlined in the six draft EISs last May would ease restrictions on oil and gas drilling and other activities in Colorado, Idaho and Wyoming.

An E&E News review of the draft EISs revealed the proposed changes appear designed to give states, as well as the oil and gas and mining industries, more "flexibility" to petition for waivers and exemptions on some restrictions, under the premise that the terrain and other characteristics of grouse habitat in each state are different and could allow for activities in grouse habitat that won’t harm the bird (Greenwire, May 3).

It’s not clear whether the proposed Forest Service revisions will focus on energy development and mining.

Shivik said most of the revisions, which the Forest Service expects to finalize next summer, clarify and simplify implementation of conservation measures designed to protect the bird and avoid a future listing under the Endangered Species Act.

"We’re trying to improve conservation in the long run," he said.

He added: "Our goal is neutral to positive changes to sage grouse as relative to the plans and conservation. It’s going to help us to spend more time in the field on conservation, instead of scratching our heads trying to figure out how to implement the plans."

Nada Culver, senior counsel and director of the Wilderness Society’s BLM Action Center in Denver, said the group is glad to hear that the Forest Service’s preferred alternative does not include removing GHMAs in Utah.

"However, seeing the sweeping list of management areas that are being modified in the preferred alternative, we can’t help but worry that the Forest Service will follow the BLM’s lead and undermine key protections for the greater sage grouse instead of following its own mandate to protect the bird," Culver said.

"We hope the Forest Service will make the right choices, the ones it is required to make under its laws and regulations," she added.