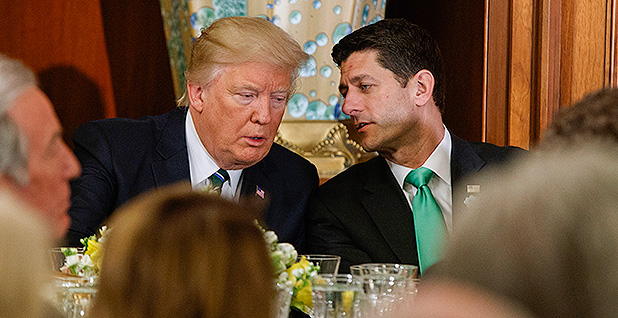 Congress’ first budget battle with the Trump White House likely won’t wait until fiscal 2018 spending bills are due this fall. It may come next month.

The fight looms as lawmakers seek to wrap up fiscal 2017 spending bills ahead of an April 28 deadline, when current, short-term funding expires.

If they can’t get the work done, much of government would be forced to shut down. And the administration yesterday upped the ante in that already high-stakes fiscal cliffhanger.

On top of already-proposed fiscal 2017 spending, the White House asked Congress to tack on $33 billion more for Defense Department overseas operations, military equipment and beginning to build a wall along the U.S.-Mexico border. Steep domestic cuts would help foot the bill.

"I recommend that the Congress enact non-defense discretionary reductions of $18 billion in FY 2017, which would fully offset the increased proposal for [Homeland Security] and would offset half of the amounts proposed for [the Defense Department]," President Trump wrote in a letter yesterday to congressional leaders.

Trump, in the nine-page letter, detailed how he would spend the increased funds, with more than half going toward military weapons and nearly $2 billion for the wall.

But the president offered no specifics on the domestic spending cuts. The fact that they would have to come from the last six months of the current fiscal year would magnify their impact.

Trump did not mention them in the letter, but the funding changes would also likely break carefully negotiated Budget Control Act caps on defense and non-defense spending for fiscal 2017.

It’s not clear whether lawmakers have a desire to reopen negotiations over those budget caps, especially at this stage in the calendar.

Speaker Paul Ryan (R-Wis.) said yesterday he does not see a "big issue" in wrapping up fiscal 2017 spending because he does not expect the final figures to violate the BCA, a law he helped negotiate as the House Budget chairman in 2014.

Ryan did not elaborate, but his remarks suggest he does not favor a supplemental for fiscal 2017 as proposed by the White House if it breaks caps.

Moreover, Senate Democrats have said they would filibuster any fiscal 2017 package that calls for building a border wall.

Democrats expressed such a view earlier this week when they expected the White House to request additional spending on an emergency basis, which would not require cuts. But forcing domestic reductions to pay for the wall will only solidify opposition.

"We’ve been very clear that we think this is a waste of taxpayer dollars," said Sen. Chris Van Hollen (D-Md.), a member of the Senate Appropriations Committee.

House Minority Whip Steny Hoyer (D-Md.) said asking Congress to come up with funds for the border wall would be a "nonstarter."

Many Republicans are also reluctant to support domestic spending cuts to pay for the Pentagon hike and border project.

House Appropriations Chairman Rodney Frelinghuysen (R-N.J.) was just as noncommittal, saying his panel would "analyze and make decisions" on the supplemental as it tries to quickly finish fiscal 2017 spending bills.