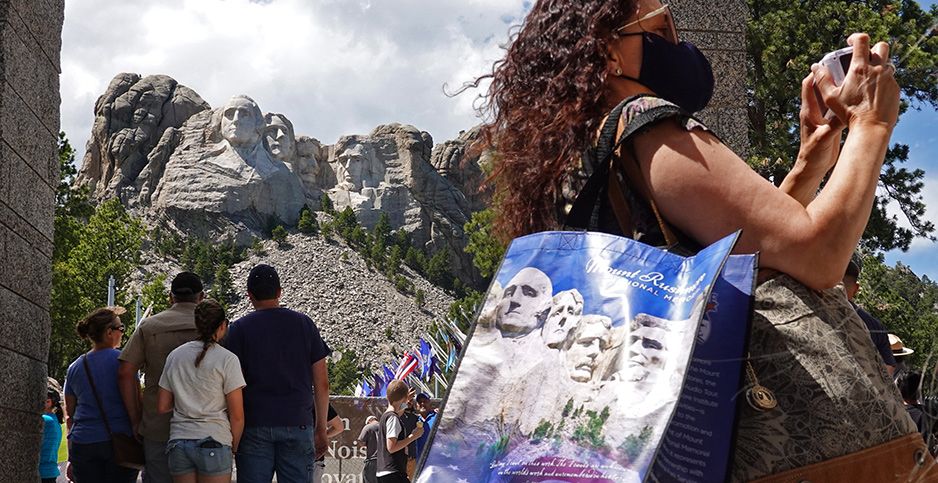 Interior Secretary Deb Haaland is ready to welcome back visitors eager to get out and experience the wonders of public lands after more than a year dealing with the restrictions of pandemic life.

But she doesn’t necessarily want them to visit the Lincoln Memorial or Great Smoky Mountains National Park, or even Zion National Park.

"There are so many national parks that have a very low visitor rate per year because people don’t know about them. They’ll go to the big national parks, they’ll go to the well-known areas," Haaland said recently at a forum sponsored by the University of Colorado’s Law School. "There are national parks all over our country that folks can visit. I would challenge everyone to find a place like that: where there are no crowds, where you have opportunities to be in nature in a quiet space."

Federal officials who oversee the nation’s public lands are bracing for a potentially record influx of visitors at National Park Service units, as well as national forests, Fish and Wildlife Service refuges and acreage overseen by the Bureau of Land Management.

"We are headed into a summer which literally could be one of the biggest visitation summers in the National Park Service’s history as Americans and others revisit and rediscover our public lands following the pandemic," Shannon Estenoz, Interior’s principal deputy assistant secretary for fish and wildlife and parks, told the Outdoor Recreation Roundtable’s annual conference this week.

Some parks have put in place reservation systems, such as to get into Yosemite National Park or for popular features like the scenic 50-mile Going-to-the-Sun Road at Glacier National Park in Montana. But Haaland suggested that would-be visitors also seek out the more obscure parks within the more than 400 NPS sites (Greenwire, May 28).

An Interior Department spokeswoman declined to elaborate on whether Haaland had specific recommendations, but NPS visitation statistics provide clear divisions between the most popular sites and the least.

During the pandemic — when visitation generally dropped nationwide — some of the most used sites remained in high demand. On the West Coast, the Golden Gate National Recreation Area in California drew more than 12.4 million visitors in 2020, although that was down from more than 15 million in 2019. On the East Coast, the Gateway National Recreation Area in New York City and New Jersey drew more than 6.3 million visitors in 2020, slightly off its 7.8 million visitations the year prior.

According to NPS data for 2020, more than half of all visits to its sites occurred at just 23 park units, or 6% of all parks.

And some of those parks expect visitors to return in full force in the coming summer months.

"There is an uptick in reservations to campgrounds. We’re seeing that parks are getting reservations for the local hotels that are there both in the gateway communities and on park sites. We’re also seeing places like Kalispell, Mont. — to get to Glacier National Park — that flights are being sold out," Reginald Chapple, NPS’s acting assistant director for partnerships and civic engagement, said at the ORR conference.

But some of the least visited national parks aren’t exactly the kind of places to go for a weekend hike.

The site — which is inaccessible by road — tallied 100 visitors in 2019 and just 36 in 2020. NPS itself promotes Aniakchak as "No Lines, No Waiting!" while acknowledging its "notoriously bad weather."

Instead, Chapple points would-be park visitors to NPS’s recently released mobile app and website, which he said would allow people to "plan like a park ranger."

Echoing Haaland’s remarks, NPS encourages the public to explore "the lesser-known" parks, promoting them for having "fewer crowds and lines."

Alternatives to Rocky Mountain National Park include directing would-be visitors to drive west to the Black Canyon of the Gunnison National Park or south to the Florissant Fossil Beds National Monument west of Colorado Springs, Colo.

Lesser used sites in Utah include the Hovenweep National Monument. Just across the border in Arizona, visitors could explore the Rainbow Bridge National Monument, home to the world’s highest natural bridge.

But Haaland also pressed tourists to "recreate responsibly" regardless of their location, echoing the park service’s social media campaign of the same name.

"Folks need to know how to be in a place when they’re in it," Haaland said. "To respect the fragility of the ecosystems and so forth."

Colorado Sen. John Hickenlooper (D) acknowledged the unintentional damage large crowds can cause on public lands but said a key solution is to make all public lands more accessible.

"We have these amazing national forests and national parks, and some of the beautiful land that is managed by the Bureau of Land Management … but we have seen some of the consequences — the litter, the wear on trails — there is a level of ecological damage that is done when you increase the visitation," Hickenlooper said this week during a virtual town hall sponsored by Conservation Colorado and Environment Colorado.

Instead, Hickenlooper proposed expanding access points to existing public lands where possible, to give visitors more options about where to visit.

"Huge swaths of our public lands never get visitations from the public, or almost none," Hickenlooper said. "And I think there are a number of places where we could create small parking lots without endangering the environment and allow another point of access."