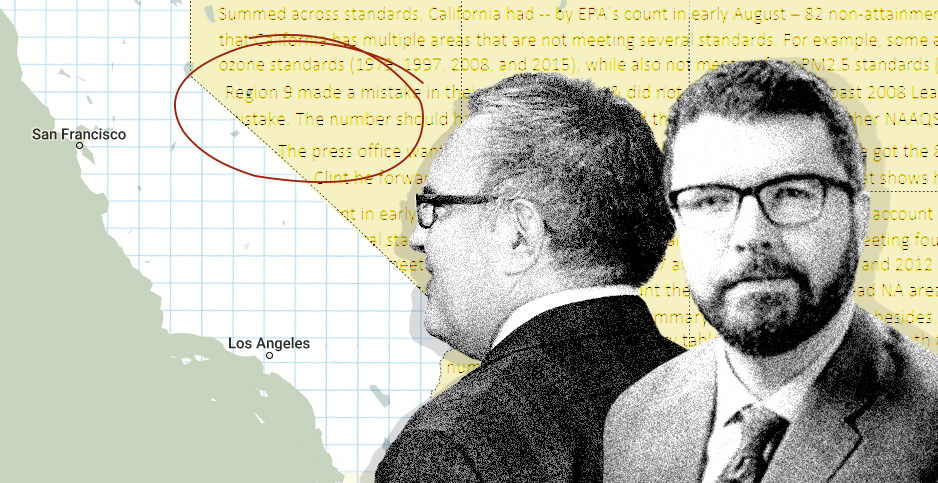 At issue is Wheeler’s September letter to the California Air Resources Board in which he threatened to revoke the state’s highway funds over its alleged failure to comply with the Clean Air Act (Greenwire, Sept. 24).

The emails show that Clint Woods, the former deputy EPA air chief, played a pivotal role in gathering data to back up Wheeler’s claims — data that was criticized as inaccurate by CARB and California Democrats.

E&E News obtained the emails through a Freedom of Information Act request to EPA Region 9, which covers the Pacific Southwest.

In his letter to CARB, Wheeler wrote that California had "failed to carry out its most basic tasks under the Clean Air Act" and had "the worst air quality in the United States."

To bolster his claims, the EPA chief asserted that the Golden State had "82 nonattainment areas and 34 million people living in areas that do not meet National Ambient Air Quality Standards — more than twice as many people as any other state in the country."

Mere hours after Wheeler sent his letter, EPA’s press office began fielding questions about the accuracy of the 82 figure.

"Do you have a list of the 82 nonattainment areas? I get a different count when I look here," wrote a reporter for Bloomberg Environment, linking to EPA’s own data set.

"The press office wants us to provide a response to the questions of how we got the 82 non-attainment areas," Isabel DeLuca, deputy director of communications in the air office, wrote to colleagues.

In the quest to track down the figure’s origins, all signs pointed to Woods.

DeLuca wrote that Woods had created an Excel spreadsheet "that shows how they got the number."

Mocka added, "[EPA Communications Director] John Millett wrote a short statement for the 5 pm press deadline, but [the Office of Air Quality Planning and Standards] still needs to compare Clint’s spreadsheets and develop a response to the 82 areas question. It keeps coming up."

The issue eventually caught the attention of Democratic lawmakers on Capitol Hill.

Last month, California Democrats on the House Energy and Commerce Committee took issue with Woods’ math in a letter to EPA’s Office of Inspector General requesting an investigation into the matter (E&E News PM, Nov. 25).

"The letter incorrectly references 82 nonattainment areas in the state of California," the lawmakers wrote. "As CARB has pointed out, in arriving at this number, EPA at times counted one single area repeatedly and included sovereign tribal communities for which the state is not responsible."

They concluded: "When accounting for these miscalculations, the number of nonattainment areas is actually 20, far fewer than the original estimate of 82."

Woods has attracted controversy since leaving the agency in October.

After taking a job at Ohio State University, Woods faced pushback last month from some students and faculty, who questioned his role in industry-backed efforts to ease air pollution regulations and limit EPA’s use of science (Greenwire, Nov. 22).

Asked for comment, EPA spokesman Michael Abboud said in an emailed statement to E&E News: "EPA Region 9 has been working with EPA headquarters and will continue to work with them to bring California into compliance while delivering environmental and health protections to the tens of millions of its residents. Unlike previous administrations that were complacent with noncompliance, this administration will not let these serious environmental failures languish. California faces significant environmental issues that need to be addressed."

Abboud added, "I would also like to point out that this is a dumb story."

Woods didn’t respond to a request for comment over the weekend.

Clarification: This story previously stated that EPA Administrator Andrew Wheeler’s assertion about the number of nonattainment areas in California was "roundly" criticized. It was criticized largely by the California Air Resources Board and California Democrats.