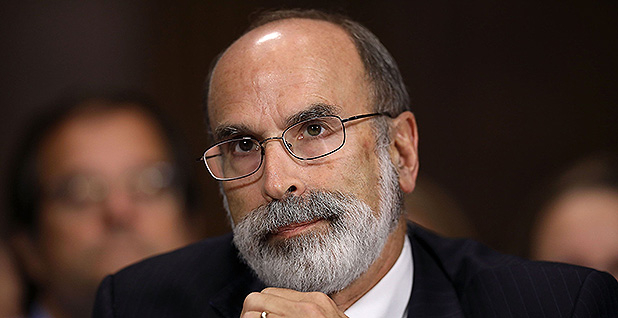 Michael Bromwich formerly served as director of the Bureau of Safety and Environmental Enforcement. Win McNamee/SIPA/Newscom

Ahead of the release of the Trump administration’s changes to Obama-era rules governing offshore oil platforms, Michael Bromwich is worried.

"I don’t think they are in the public’s interest," he said in an interview with E&E News on Friday.

At the time, countless investigations were launched, and they confirmed something that had long been understood: Government regulators had fairly weak enforcement abilities and were too chummy with oil executives.

Bromwich helped create the Bureau of Safety and Environmental Enforcement, better known as BSEE. That separated the offshore enforcement and permitting units in the Interior Department to eliminate an apparent conflict.

Now, the Trump administration is poised to erase some of that regulation. BSEE, now directed by Scott Angelle, who has a history in the oil industry, has proposed changes to provisions of the blowout preventer and well control systems rule. Those measures were enacted in 2016 after nearly six years of government review.

"It’s hard to say a process of close to six years was done irresponsibility," said Bromwich, who left the agency in late 2011. Bromwich also served as the Department of Justice inspector general in the 1990s and, last fall, joined the legal team representing Christine Blasey Ford, who testified before the Senate in the confirmation fight over Supreme Court Justice Brett Kavanaugh.

Bromwich argued the 2016 rule was in effect less than a year before Angelle sought to tamper with it. The rule strengthened oversight of blowout preventers, which failed in the 2010 BP spill, when millions of barrels of oil polluted the Gulf of Mexico. The Trump administration’s proposed changes more closely align with the oil industry’s standards while increasing operator flexibility and reducing excessive burdens, according to BSEE.

"If you went up to a well-informed citizen on the street and asked, ‘How would you feel about these standards set entirely by the industry?’" Bromwich said. "I think they would be shocked."

A spokeswoman at BSEE declined to comment other than to say the revisions are under review by the Office of Management and Budget. OMB received the proposed revisions on Dec. 13. According to a senior administration official, rulemaking processes have continued during the government shutdown — with assistance from the Office of Information and Regulatory Affairs.

When Bromwich first arrived at the agency, he was "very surprised" to find regulations based on industry standards. But he came to understand why that was necessary: "The agency didn’t have the horsepower to develop its own standards."

At the same time, he rejects industry’s argument that BSEE should not expand American Petroleum Institute Standard 53, which covers blowout preventers. "What kind of logic is that?" he asked.

The oil industry has argued that the 2016 rule is costly and cumbersome. But Bromwich charged the industry’s expenses had yet to be proven.

Yet he acknowledged that this country will continue to drill for oil — and mistakes will be made. When asked, he said after a catastrophic event, it is possible that regulations overreach.

But his beef is that the Trump administration did not let the meticulously crafted 2016 rule fully play out for three to five years before axing it. At that point, he said, BSEE could "re-examine and make some of the changes" that he believes are being rushed through.