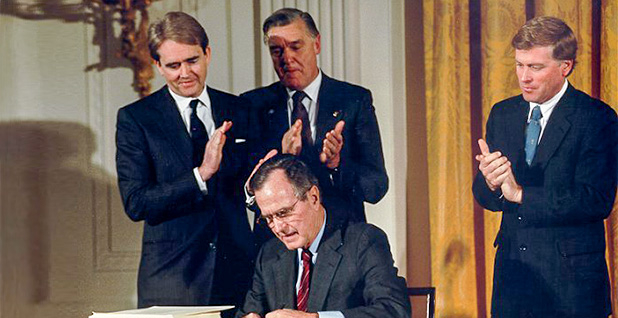 Acting EPA chief Andrew Wheeler sat down last week with one of his predecessors who has been an outspoken critic of Scott Pruitt and the Trump administration.

William Reilly, who led EPA during the George H.W. Bush administration, met Wheeler at agency headquarters, according to the acting administrator’s public calendar.

Such meetings are standard practice for agency leaders, who frequently solicit advice from their predecessors — including those from opposing political parties. But the sit-down is particularly noteworthy for Wheeler, given that Pruitt — President Trump’s first EPA boss, who resigned in July amid a hailstorm of ethical scandals — didn’t reach out to some of the ex-EPA administrators who criticized him.

Wheeler and Reilly met for about 45 minutes in Wheeler’s third-floor office, Reilly said yesterday in an interview.

Reilly called Wheeler a "very good listener" who "started very well" at the agency, even if they’re likely to disagree on "many, if not most" policy items. Reilly was actually Wheeler’s boss in the 1990s, when Reilly led the agency and Wheeler was a young career staffer in the toxics office (Greenwire, July 31).

"Essentially, I see him as a serious and responsible professional with integrity," Reilly said.

During Pruitt’s tenure, Reilly criticized his approach to EPA career staff, his round-the-clock security detail (a first among EPA administrators) and his regulatory rollbacks. Reilly is no fan of Trump, either — he backed Hillary Clinton in the 2016 presidential race and accused the administration in a Washington Post op-ed written with two other former EPA chiefs of putting the nation on a "dangerous path" when it comes to environmental policy.

While Pruitt was criticized by many of his predecessors — Republicans and Democrats alike — he found an early ally in former George W. Bush-era EPA boss Stephen Johnson. In a request last year to schedule a call with Pruitt, Johnson told an assistant that he hadn’t been critical of Pruitt and "that he knows ‘where the warts are in the agency’ and hopes to be of help," according to an internal email released under the Freedom of Information Act (Climatewire, June 25).

Pruitt’s public calendar shows that he had a call with Johnson later that month, on May 22. Pruitt’s calendar also shows that he met with President Obama’s former EPA deputy administrator, Bob Perciasepe, on May 25 last year at EPA headquarters.

EPA’s press office declined to comment on why Wheeler sought the meeting with Reilly or whether he has asked for meetings with other ex-EPA bosses.

Reilly said Wheeler strikes him as someone who "cares about the mission" of EPA, "which is something that I never saw an indication that Pruitt did."

During their meeting last week, Reilly offered advice: "I think it’s very important to identify one or more areas where the rationale is the protection of the environment rather than the reduction of cost or regulatory responsibilities."

Reilly also urged him to convene a stakeholder group to review wetland regulation, he said, and to "reconstitute a credible science advisory committee" after Pruitt put in place a policy that generally bars agency grant recipients from serving on advisory committees.

"I should not imply that he indicated receptivity or support for either one," Reilly said. "He listened, and he heard me out."

Reilly said he was encouraged by Wheeler’s support for international work and for recognizing the importance of EPA in setting an example for other countries. "That impressed me," Reilly said. "He spoke with, I thought, convincing concern about continuing to keep the banner high for the important role it plays for the rest of the world."

Reilly isn’t the only noteworthy meeting on Wheeler’s public calendar.

And Wheeler met last week with former acting EPA Deputy Administrator Mike Flynn, a decadeslong career official who retired in April just before Wheeler was confirmed to be EPA deputy administrator under Pruitt.