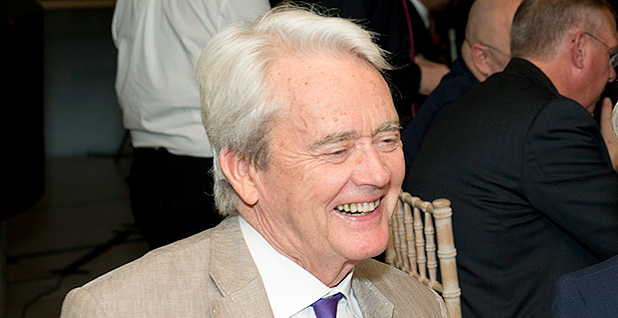 Reilly, who led EPA during the George H.W. Bush administration, was a critic of President Trump’s environmental agenda on the campaign trail and joined other former Republican EPA leaders endorsing Democrat Hillary Clinton during the campaign.

But while he’s watching EPA "really closely," he’s "tried not to prejudge," he said. Reilly is hoping Trump’s pick to lead EPA, Oklahoma Attorney General Scott Pruitt (R), will make some positive changes and calm the waters in an agency that’s anxious about what’s to come.

Reilly recently chatted with E&E News about his advice for Pruitt, his political leanings and his bad habits.

What’s your advice for Scott Pruitt as he heads into EPA?

I think if you really are going to do some of the things [Trump EPA transition leader] Myron Ebell says they’re going to do, you can’t do it without statutory changes. You want to do something on your watch for the environment, something positive and memorable and consequential. … Drinking water might be where it doesn’t raise any ideological issues. … Drinking water is a big problem, we’ve got a lot of aging infrastructure, and when Trump has spoken about infrastructure, he’s often put water first. You think about it, he’s a golf course developer. Particularly in the Southwest, he’s got to understand water.

The transition group terrorized the senior staff and caused them to be very anxious about the future. I had suggested that Pruitt … reassure them, meet with them, show that he knows the agency. He did demonstrate a lot of knowledge, I thought, in his hearing. And essentially remind people that these folks are not speaking for him. When Myron Ebell said that they were going to cut the staff by two-thirds, that really freaked out a lot of people. I made the point that it’s very doubtful that transition people are speaking with authority.

Keep the course and prepare to defend initiatives and their purpose and also their costs. The idea that the place is a regulatory hornet’s nest and that it’s hobbling all sorts of activity around the country and creativity is, I think, way overdone. I really haven’t seen the industries where that has been a major problem. I guess the mining industry would say it is, but what are we talking about that’s so upset the mining industry? It’s stream-side protection, it’s concern with mountaintop removal. Really, we’re going to go back to the way things were done before? I don’t think the people — many of them, at least — who pick on the EPA as having run amok in excessive regulation can defend a number of things that now they want to do.

Who do you think the best environmental president has been?

I guess I would say Theodore Roosevelt. I think that in the last century, it would have to be Nixon. The case is pretty strong for Nixon. People made a lot of the facts — including people close to him — that it wasn’t his issue and he didn’t have his heart in it. And I say, well, I’ve never judged presidents on that basis. What he did was very significant.

Other than you, who has been the most consequential EPA administrator?

I would say it was [Bill] Ruckelshaus. We had the great good fortune to have somebody who understood the need for vigorous enforcement to make clear this agency had integrity and drive and also had smarts. He had to figure out how to administer laws that were not based on science or careful research, and also for which — in the case particularly of the Clean Air Act — the technology didn’t exist, it had to be invented. The agency drove hard, established right at the top a lot of integrity.

Do you consider yourself a Republican?

I remember my wife’s family would whisper, "Is he really a Republican?" They’re all Democrats, faculty at Yale. … I am still a registered Republican.

But you didn’t vote for Trump?

Nope, that will not surprise anybody.

How did you get into environmental issues?

I really liked land. I think my parent’s farm had something to do with that. … I really was fascinated by the sea. I remember when I was 4 or 5, I remember going to Lake Michigan. I had never seen a body of water that you could not see across, and I thought that was pretty fantastic. And then we would go to Cape Cod, where the rest of the family would summer, a lot of them, so I got used to that and was a land-use lawyer, essentially. I wrote my law school thesis on land reform in Chile.

How many languages do you speak?

I speak French. I basically speak Spanish. I did do press conferences in Spanish when I was World Wildlife Fund president. … But I haven’t kept that to the degree that I should have. … I go to a Hispanic Mass, and I often can’t follow that. … All of a sudden, we’ll all be standing up applauding, and I won’t have a clue. I do it every Sunday. I really like the culture, and I like the scene.

You’re a swimmer. How often do you swim — is it every day?

In the summertime it is, and in the wintertime probably three or four days. In the summertime, I really like to have long swims. I got into cold-water swimming a few years ago.

Do you have any bad habits?

I take too long reading the newspaper in the morning.

What’s your primary occupation at the moment?

I would say primarily I am spending a lot of time writing a memoir.