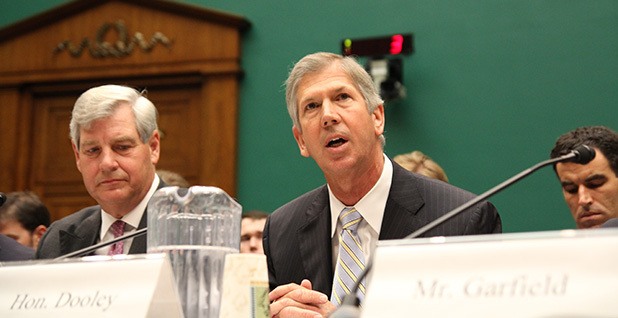 Cal Dooley is not your typical lobbyist.

The former farmer who rises early and likes to work outside stands to make a big mark on U.S. environmental regulation as the head of the chemical industry’s largest trade organization, the American Chemistry Council.

But he wouldn’t describe it that way, his backers say.

"Unlike many people in Washington, Cal is not looking for the spotlight," said Anne Kolton, the American Chemistry Council’s vice president of communications, who joined the group in 2010 after stints at the George W. Bush White House and the Department of Energy.

His personality was evident in the staging of a press conference outside the U.S. Capitol last year that roped in 10 senators and members of advocacy groups that supported a pending bill to update the Toxic Substances Control Act of 1976. Listed by a lawmaker’s office as a speaker at the event, Dooley instead looked on from the audience.

But Dooley, 62, a Tulare County, Calif., farmer-turned-Democratic-congressman and now president and CEO of the powerful trade group that represents the nation’s largest chemical companies, may have played the biggest role of all in making the legislative changes touted before reporters possible.

The effort roped in lawmakers of both parties, who often spar on other energy and environmental concerns (Greenwire, Oct. 6, 2015).

The trade group’s decision to back TSCA on its terms — rather than fighting to keep the status quo — is seen as critical in creating a political environment where the issue can move forward in Congress. ACC upped its lobbying spending when Dooley was hired in 2008 and spent more than $72 million on advocacy through 2015, or about $135,000 per member of Congress, according to the Center for Responsive Politics, and now has more than 200 employees at its Washington, D.C., offices.

Though the ACC faces criticism of its policies from many environmental groups, observers say its leader has used his own blend of pragmatism, cool-headed thinking and pro-business sensibilities to become a respected and well-compensated lobbyist. And his personal and professional connections have ingratiated him with lawmakers of both parties who stand ready to help the industry’s priorities.

It’s a style that has proven lucrative for Dooley, who earned more than $3 million from the tax-exempt group in 2013, according to its filings with the Internal Revenue Service.

Even some of the group’s adversaries find Dooley likeable, though they disagree with ACC’s policy positions.

"It’s sort of a classic Washington, D.C., frenemies story," said Environmental Working Group President Ken Cook, who testified before Congress last year that consumers had been "misled and worse time and again" by the industry.

Dooley is no stranger to building a coalition. As a lawmaker in the 1990s, he was among House Agriculture Committee leaders who worked to build a coalition to pass what became the Food Quality Protection Act in 1996.

Now, as the House and Senate are negotiating how to reconcile two versions of the TSCA legislation, Dooley stands on the cusp of what could be his biggest policy win yet — though his aides say he isn’t counting.

Former staffers and lawmakers who have worked with Dooley describe him as cerebral but passionate — and one who prefers gentle persuasion to putting the screws on.

Dooley is "trusted and respected," Shimkus said, describing technical discussions between ACC lawyers and his committee staff on TSCA.

At such meetings, Dooley and Shimkus often both listen in as teams of lawyers get into the weeds.

While other lawmakers got worked up, Dooley preferred to stay cool and patient, said Adam Kovacevich, who served as Dooley’s press secretary in the early 2000s and is now Google’s director of U.S. public policy, even though that meant it sometimes took longer to get his points across.

"Cal just realized there was more power in calm, respectful, behind-the-scenes advocacy," Kovacevich said, "which turned out to be true."

Dooley bristled when New Mexico Sen. Tom Udall (D) asked at a 2011 hearing if he was concerned about health studies that showed harmful chemicals were accumulating in American’s blood and fingered the industry as an obstacle to reform.

"I take offense when anyone would even insinuate that our industry is supporting an increase in the body burden of chemicals," Dooley said then.

But in reality, the men are on better terms.

Dooley and Udall have known each other for years, and their wives, Jill Cooper and Linda Dooley, are friends.

"It always makes a difference when you know each other and when you’re able to have a basic trust of each other," Udall told Greenwire.

Dooley’s friendships with lawmakers stem from his time in Congress, ACC’s Kolton said.

"It was nowhere near as personal as it is, or as it seems, today," Kolton said. "He has a lot of different friends from all different kinds of political backgrounds and all different walks of life."

Jon Whelan, a filmmaker who directed and starred in a 2015 documentary "Stink!" about the regulation of chemicals in the United States, included an unplanned interview with Dooley near the end of the film.

The ACC is "just used to dealing at a high level with press releases," Whelan said. "They don’t want to talk to someone like me because I’ll ask them questions that are off the script."

When Whelan posed a series of pointed questions to Dooley after he left a 2011 House Energy and Commerce Committee hearing, the ex-lawmaker stayed on message — arguing that chemicals are regulated by a strong federal system in which consumers should have confidence. Dooley encouraged the filmmaker to talk with his staff so they could film a longer interview. That never happened, Whelan said.

Dooley also declined to be interviewed for this story.

"He’s a pro, you know what I mean?" Whelan said. "He’s very slick. He doesn’t break for a second. He could have punched me in the nose, but he didn’t — I’m grateful for that."

Despite getting the runaround, Whelan said he understood why Dooley made the arguments he did.

"I’m sure he’s not an evil monster — he’s doing his job," Whelan said. "I’m sure you could sit there and have a beer and he’s probably a nice guy."

Kolton said ACC’s position that chemicals should be evaluated based on their exposure, and not solely their risk, dovetails with Dooley’s political philosophy of regulatory pragmatism.

"The idea of risk, it’s very consistent with Cal’s overall outlook," Kolton said. "There are multiple factors that have to come into play when you make a judgement. Things are not as black and white as people will tell you they are."

Dooley was part of the fourth-generation of his family to farm California’s San Joaquin Valley. A graduate of Hanford High School in Hanford, Calif., in 1972, Dooley earned a bachelor’s degree in agricultural economics from the University of California, Davis, and a master’s degree in management from Stanford University.

His brother, Dan Dooley, was a partner at several law firms and worked as an administrator at the University of California system and on the California Board of Food and Agriculture. Sister-in-law Diana Dooley serves as California’s secretary of health and human services.

Unlike many of today’s members of Congress, Dooley moved his family to a Northern Virginia home from the beginning, where he used to entertain other lawmakers, according to The Modesto Bee.

Some lawmakers still regularly have dinner at the Dooleys’ McLean, Va., home.

Linda Dooley ran a nonprofit organization, the Bryce Harlow Foundation, before retiring in 2014. The foundation is a fellowship program for young professionals in the lobbying and communication fields.

Accepting an award from the foundation in 2004, Dooley said hard realities of being a farmer motivated him to branch out professionally.

"If you have ever been on a D7 Caterpillar tractor in the Central Valley of California in the middle of August when it is 105 and dusty, you know there is something better in life," Dooley said in 2004 while accepting an award.

Dooley is still a morning person — a holdover from his days on the farm, Kolton said. He tries to be out of the office by 5:30 p.m.

Dooley’s willingness to reconsider established positions — like his pivot on ACC’s past resistance to updating the chemicals law — was evident in his openness to cutting farm subsidies as a member of the House Agriculture Committee.

As Congress worked on the farm bill in 2001, Dooley was one of just a few lawmakers open to taking an ax to the benefits — even though his district was heavily agricultural and he was taking home the benefits personally at the time.

Dooley was also one of 21 Democrats to support granting former President George W. Bush trade promotion authority in 2001 — a proposal that passed the House by a single vote.

"He came from a very different background, and he looked at it very much through an agricultural lens," said Rep. Sander Levin (D-Mich.), a skeptic of free trade agreements.

Though Levin said he and Dooley didn’t change each other’s minds, "We respected our differences."

"When I listened to Cal, I learned something, and it was usually helpful," said former Rep. Charles Stenholm (D-Texas), then the ranking member on the Agriculture Committee, who pushed to keep the subsidies.

In the office, Dooley was known for worker-friendly policies such as encouraging new mothers to take their babies to work with them regularly during their first year after giving birth, a former staffer said. Dooley also wouldn’t hesitate to insert himself in the weeds of policy when necessary, the ex-aide said, like meeting with House legislative counsel staffers drafting a proposed reform of the system of farm subsidies — an unusual step for members of Congress to do themselves.

A motto in his old congressional office, Dooley said, was "Strive to be relevant."

Another former top aide, ex-chief of staff Lisa Quigley, said Dooley attracted staffers who wanted "to work for the people that are the most relevant to the process."

That made employment in Dooley’s office attractive because of his influence as a moderate Democrat able to cut deals with the GOP and hold the ear of the Clinton and Bush administrations, Quigley said.

Quigley, who is now the chief of staff to Rep. Jim Cooper (D-Tenn.), ran and lost a primary campaign to replace Dooley in 2004 to Rep. Jim Costa (D-Calif.).

"I haven’t talked to him lately, but every time I have he’s been very happy at what he’s doing," Stenholm said, "and the people that are paying him are happy, too."