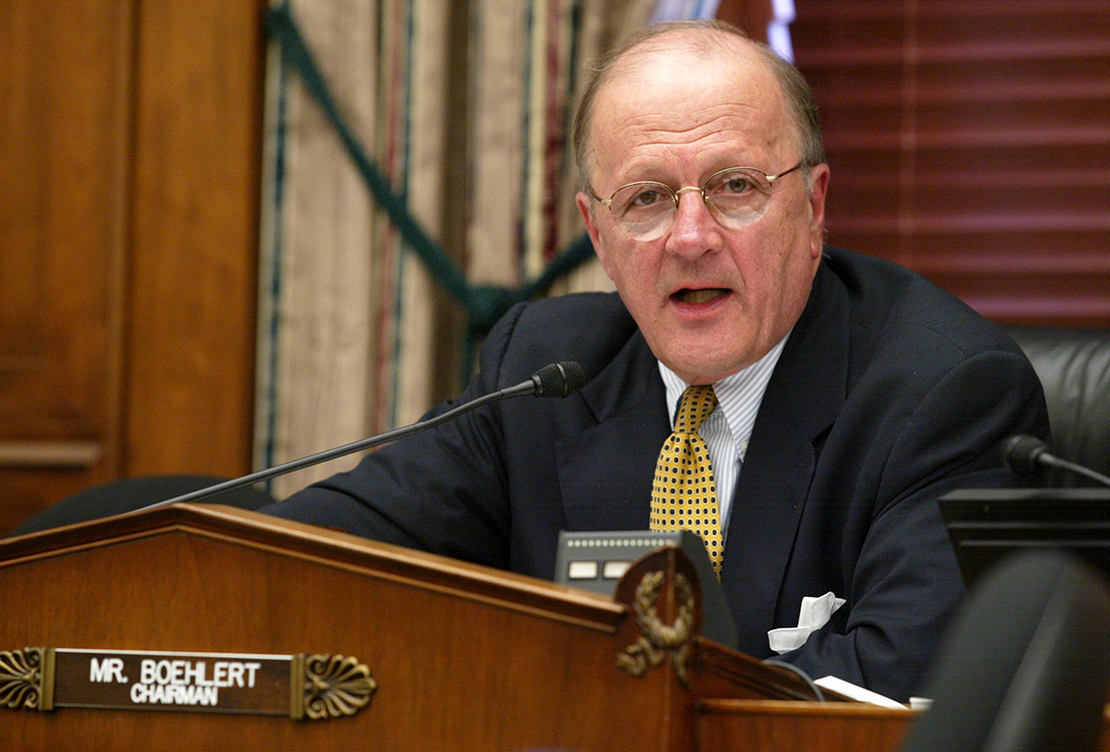 Former Rep. Sherwood “Sherry” Boehlert, a centrist Republican who often bucked his party on environmental and climate change policy, died today. He was 84.

Boehlert represented a central New York district from 1983 to 2007 and chaired the House Science Committee in his final six years in office. He was a frequent advocate for policies to curb air pollution and helped pass the Clean Air Act amendments of 1990, focusing on issues like acid rain and auto emissions.

He also resisted GOP efforts, after they took the House majority in 1994, to dramatically roll back environmental regulations, and pushed back against the administration of President George W. Bush when officials worked to reduce standards.

“He was in many pitched battles over the environment — on acid rain, clean water, climate change, endangered species, land use — but he never succumbed to anger or resentment or despair,” David Goldston, who was the Science Committee’s chief of staff under Boehlert, told E&E News. He now leads the Massachusetts Institute of Technology’s Washington office.

“He was always willing to try to work with all sides, and he tried to stay on good terms with everyone involved and to find a path forward. He was also a great boss — someone who greatly and openly valued those who worked for him,” Goldston said.

In a 2016 interview with E&E News, Boehlert said his work on the Clean Air Act amendments, alongside the administration of President George H.W. Bush, then-Rep. Henry Waxman (D-Calif.) and others, was one of his “proudest accomplishments” (Greenwire, Aug. 26, 2016).

“That type of partnership doesn’t exist any longer today. People won’t even acknowledge a friendship with someone on the other side of the aisle,” he said.

Boehlert described himself as a “progressive or liberal Republican” and was a frequent critic of his party. “It’s sad to say most of the people in positions of responsibility in my Republican Party — I’m a lifelong Republican — are climate deniers. That is sad, unfortunate and does not work for the nation’s interest,” he said in the 2016 interview, in which he all but foreclosed on the possibility of voting for Donald Trump, then the party’s presidential nominee.

When he announced in 2006 that he would retire, Boehlert lamented that the time for moderates in Congress had ended. “As events of the past year in Washington has documented, this has been the moderates’ moment,” he said. “There is an abundance of evidence to suggest that our influence has expanded and our moment has been extended” (E&E News PM, March 17, 2006).

Boehlert’s post-congressional activities included sitting on the boards of the NRDC Action Fund and the League of Conservation Voters Education Fund.

‘’Sherry was a visionary lawmaker who rose above partisan politics when it came to protecting our environment and public health. Our air, our water, and our lands are cleaner in no small part due to his tireless efforts,” Patricia Bauman, the NRDC Action Fund’s board chair, said in a statement.

“Sherry embodied public service of the highest order, and we, and the world, are all the better for his work,” she said.

Boehlert’s death was announced today by state Sen. Joseph Griffo (R). “Sherry was a dedicated and accomplished public servant who had an extraordinary career and proudly served his community and constituents with honor and distinction. He will be greatly missed and remembered fondly,” Griffo said in his statement.