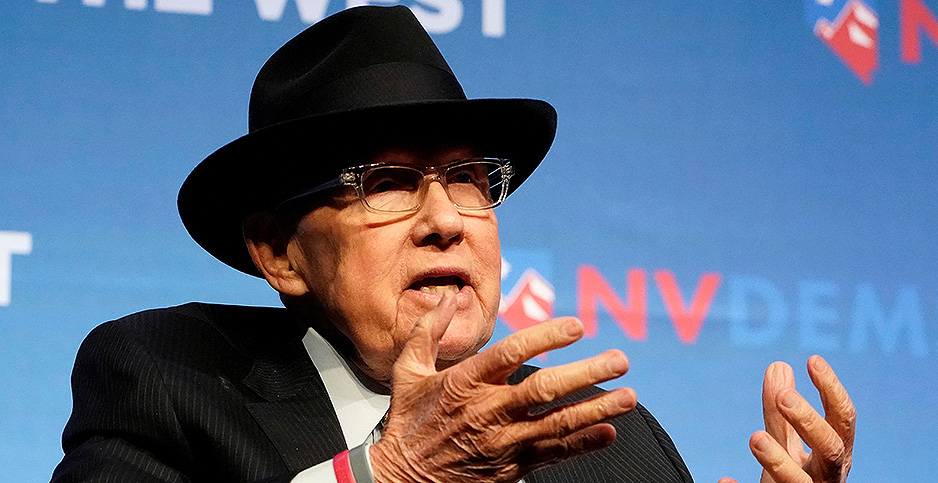 Former Senate Majority Leader Harry Reid (D-Nev.), seen here at a 2019 event in Las Vegas, is optimistic about what President-elect Joe Biden can do about climate change. Carlo Allegri/Reuters/Newscom

The Nevada Democrat has had a flurry of phone calls and text messages with aides to President-elect Joe Biden in recent days, recommending picks for Cabinet positions and offering advice from his three decades in Congress.

The 80-year-old has also stayed active in Nevada politics, setting up a successful political operation that has shaded the Silver State blue.

A climate hawk, Reid has at times angered Republicans and delighted environmental groups with his fierce criticism of the fossil fuel industry and the Koch family.

"We’ve got to get rid of fossil fuels as fast as we can. We’ve done a pretty good job of lessening our demand for coal," he said in a recent interview.

While serving as Senate majority leader from 2007 to 2015, Reid notched a number of controversial achievements, including passage of the Affordable Care Act and elimination of the filibuster for executive branch nominations and federal judicial appointments.

Since retiring in 2017, Reid has battled pancreatic cancer. It is now in remission, but he uses a walker to get around.

The political mastermind spoke on the phone with E&E News last week about how Biden can tackle climate change without the Senate, whether the filibuster will survive and why he believes in UFOs.

What have you been up to since leaving Congress?

Well, I’ve had a few health issues. But my health has been pretty good over the last year and a half, which has given me the opportunity to become more involved.

I try to maintain contact with my former colleagues, both Democrats and Republicans. I’ve got a call in an hour or so with one of my Republican senator friends. But I try not to interfere too much. I don’t want them to think I’m trying to run the government from here.

Of course, I’m also heavily involved in Nevada politics with my program that I developed over the years. I have five children, four of whom live here in Nevada very close to me. So I keep pretty busy and am pretty content with my existence.

Have you spoken with members of President-elect Joe Biden’s transition?

They’ve been good. They’re all my friends, so it’s easy.

Have you offered any advice for the transition?

Yeah, of course I have. But as far as what I’ve talked about, that would probably be the end of all my calls if I shared that. [Laughs]

What could Biden accomplish on climate policy if the Senate remains in Republican hands after the runoff elections in Georgia in January?

Of course we’re going to wait until Jan. 5 to make that summation. But I think the climate crisis is such an issue that it cannot be ignored anymore. It is an issue that is already affecting migration around the world.

We have talked about it for years and frankly done almost nothing. That cannot continue. So regardless of whether President-elect Biden when he becomes president has a Republican majority or a Democratic majority or it’s a tie, it cannot be ignored.

And one of Joe Biden’s great attributes is he is a deal-maker. A lot of people who’ve been legislators even for a long time tend to forget what legislation is about. It’s simply about the art of compromise. That’s all it is. And Joe has been very good at understanding that. He spent those decades in the Senate as chairman of the Foreign Relations Committee, chairman of the Judiciary Committee.

What are some of the first actions that Biden should take on climate change?

As to what should happen with energy, Trump was very, very bad about renewable energy, which is something we have to focus on. So there are many, many things that Joe Biden can do as president in the first few days just with executive orders.

You’ve been a vocal critic of fossil fuels in the past. Why is that?

We’ve got to get rid of fossil fuels as fast as we can. We’ve done a pretty good job of lessening our demand for coal, but as we speak, China is building a number of brand new coal-fired generating [stations].

So we’ve got to get rid of coal and do anything we can to get rid of even natural gas, which is so much better than the normal fuel that we’ve used in the past. Other countries may not do it, but it’s to their detriment.

You served in the Senate with Biden, and then you were Senate majority leader when he was vice president under President Obama. What was it like working with him?

Obama depended on Joe Biden to come to the Hill and try to work things out. And during the time that I was the leader and responsible for trying to execute Obama’s policies, there were often times when I needed Joe Biden to help me. And he helped me on a number of occasions, one of which was during the long time I spent on the Affordable Care Act.

Do you have thoughts on who Biden should pick to lead federal agencies focused on energy and the environment, such as EPA, the Interior Department and the Department of Energy?

Yes. Even before the election was over, I’d spoken to Ricchetti on a number of occasions about some ideas I had.

Are you willing to share any of those ideas?

Well, there have been many articles written about names that are out there, and they’re good names. For [the Interior Department], they’re talking about [Democratic Sens.] Martin Heinrich and Tom Udall of New Mexico. So he’s got a wide variety of people who would be excellent that have obviously been considered ’cause there have been articles about them the last few days.

Do you think Biden should avoid progressive nominees who might not get confirmed by a GOP-controlled Senate run by Senate Majority Leader Mitch McConnell [R-Ky.]?

I think Joe Biden should select the best people that he can, the best qualified. If Republicans reject them on a partisan basis, it’s a pox on their house, not on Joe Biden.

Do you think the filibuster will survive in the next Congress? And should it survive?

Well, I’ve been very public about that in saying that it’s not a question if the filibuster’s going to be done away with. It’s just a question of when.

Now with the Senate going to be so evenly divided, it may not happen this Congress. But it’s going to happen because you cannot have a democratic body that requires 60 votes.

It used to be that there was a lot of collegiality in the Senate and so it wasn’t used very much. But McConnell has used it for everything. And as you know, I previously moved to change the rules for judges and Cabinet appointments but left a supermajority for Supreme Court justices, and the Republicans got rid of that, too.

Based on your experience of Yucca Mountain in Nevada, what do you see as the future of nuclear waste disposal in this country?

You were featured in the recent documentary "The Phenomenon," in which you said the U.S. government has been hiding evidence of possible UFO encounters for years. Why do you believe that?

Well, I’ve been on the forefront of this for a long time. I obtained $22 million in taxpayer dollars to study these aerial phenomena through the [Advanced Aerospace Threat Identification Program]. And that was extremely helpful in trying to understand what’s going on.

Do we have all the answers? Absolutely not. But at least we know that thousands of people have reported these unusual occurrences over the decades. And as I have said, we cannot ignore what’s going on. Russia, China and France are all working on this. And I hope that we will pick up the ball and continue to work on this.

I’m happy that the Pentagon now allows its pilots to report these unusual occurrences. In the past, pilots have been afraid to acknowledge them because it could hurt their promotions. So I think the federal government is doing better at recognizing it’s something we have to stay on top of. And we have better cameras now with the aircraft, and we’ve got pictures we didn’t have before.