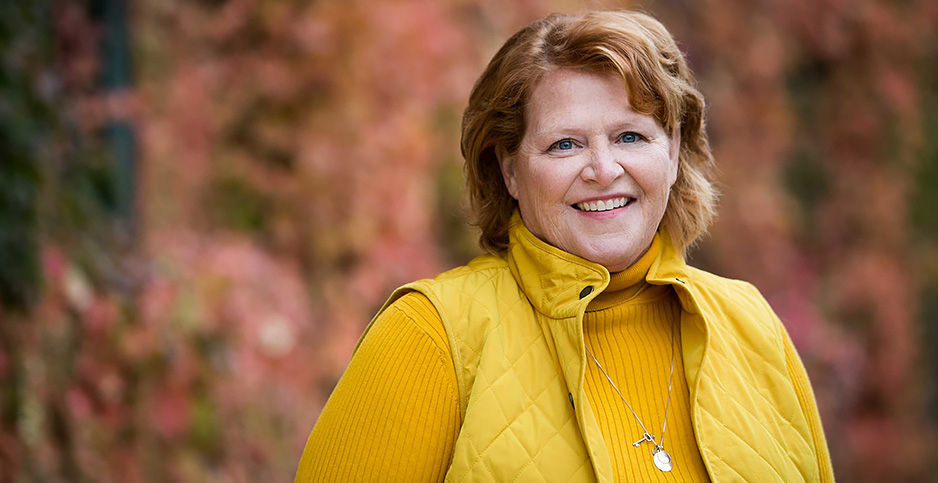 "I would just remind people that if you don’t get reelected, it’s not the end of the world, for goodness’ sake," said Heitkamp in a recent interview. A Democrat from North Dakota, Heitkamp lost her reelection bid in 2018 to then-Rep. Kevin Cramer (R).

"I mean, I look at my colleagues in the Republican Party and they’re cowering in the corner, saying, ‘Trump just tweeted this. What are we going to say?’" she added.

After leaving office, Heitkamp became a contributor for CNBC and a visiting fellow at the Institute of Politics at the Harvard Kennedy School. She now teaches at Brown University’s Watson Institute for International and Public Affairs and advises the One Country Project, an organization she founded to help Democrats reconnect with rural voters.

A moderate who often bucked her own party, Heitkamp voted against confirming Supreme Court nominee Brett Kavanaugh in 2018, a vote that some pundits viewed as hurting her uphill battle for reelection.

Her views on climate policy and fossil fuels also contrast with those of progressive Democrats, given North Dakota’s status as the second-largest oil producer in the country, although she supports bipartisan efforts to boost carbon capture, utilization and storage.

The 64-year-old survivor of breast cancer recently spoke on the phone with E&E News about why she voted against Kavanaugh, whether the Green New Deal is hurting Democrats in swing states and whether she would ever run for office again.

Have you talked to Sen. Kevin Cramer since he took office?

You know, I think there is a good rule in politics that you stay out of the way of the person who replaces you. But Kevin and I were both at an event last month honoring a soldier who was killed in action. I think honoring our soldiers is where we always have to be Americans first and not politicians.

What are your thoughts on Cramer’s record so far?

I’ve been critical of policies he’s promoted but certainly not critical of him as a person. You know, I was critical during the campaign of his myopic support of Donald Trump, and I still remain critical of it. I don’t think it’s what North Dakotans need or deserve. And so my biggest concern about his time is his unwillingness to stand up for North Dakota when Donald Trump is doing things that do not benefit our state.

In the era of the Green New Deal, is there room in the Democratic Party for lawmakers from fossil fuel-producing states like North Dakota?

I think when you step back and take a look at the goal of the Green New Deal, it’s not political. It’s to turn the corner on climate, on [carbon dioxide] emissions. And a precautionary tale is what’s happened to coal. The coal industry for years has fought this battle politically as opposed to sitting down and saying, "What can we do to meet the goal of zero carbon emissions?"

I think right now we need the ability to bring together all emitters — whether that is the fossil fuel industry, whether it’s other industrial sources, whether it’s transportation — to forge a climate plan that addresses concerns. I think there’s going to be room for states like North Dakota and Pennsylvania. There’s going to be room for them to participate in becoming part of the solution and building those alliances.

And so I think that’s the interesting space in the climate debate. We were able to do that with legislation on 45Q, which is the tax credit for carbon sequestration and utilization. Having diverse sponsorship — as diverse as [Sen. Sheldon Whitehouse (D-R.I.)] and [Senate Majority Leader Mitch McConnell (R-Ky.)] — tells us that there is a role for everyone to play in tackling climate. We just need to get everyone at the table. And I think that’ll be Joe Biden’s plan.

Is the Green New Deal hurting Democrats in swing states or more moderate or conservative places?

No. You know, I gave a talk at the University of Michigan earlier this month and said that even 10 years ago, the rural electric cooperatives in North Dakota polled people about whether they were concerned about global warming, and 65% of respondents said "yes."

So I think people are concerned. I think everybody understands that the lesson from the coal industry is you don’t ignore this problem — you engage in this problem and have a healthy debate about what needs to happen. The difference lies in how people perceive the threat — whether or not they perceive it as a crisis.

The other thing about rural America is that more and more of our farm organizations are seeing real opportunity in the carbon sequestration movement, including the [National Corn Growers Association] and the [American Farm Bureau Federation]. So I think we have a real opportunity to engage rural America in being part of the solution. I mean, let’s face it. We’re a huge part of the landmass in this country, which is a big part of what we need to do to protect our climate but also protect our land use.

What are your thoughts on President Trump and Senate Republicans’ efforts to install Judge Amy Coney Barrett on the Supreme Court before the election?

Well, I just watched [Sen. Amy Klobuchar (D-Minn.)] give her opening statement on the Judiciary Committee. I thought Amy gave such an eloquent and impassioned plea for our democracy. You know, this [confirmation process] is way too close to the election. It’s bad for our country and our democracy to rush this.

The irony is that Republicans are saying, "We’re going to win the election. We’ve got all of these silent Trump voters." Well, if you think you’re going to win, why are you rushing this? Win and then do it.

In 2018, you voted against confirming Supreme Court nominee Brett Kavanaugh. Do you think that hurt your reelection chances?

Did it hurt me? Did it hurt [former Sen. Claire McCaskill (D-Miss.)] and [former Sen. Joe Donnelly (D-Ind.)]? Yeah, probably. But this was a hill for me to die on. Politically die on, I should say. I’m doing fine. [Laughs]

Why did you vote to confirm Supreme Court nominee Neil Gorsuchin 2017 but oppose Kavanaugh in 2018?

Justice Gorsuch is conservative. He’s not my brand. But when I met with him, I believed he was a man of principle who would do the right thing, albeit not always the thing I would agree with, but consistent with his view.

I also voted for Justice Gorsuch because he had written really intelligent opinions on Indian rights. He was the author of a very, very important piece of jurisprudence on tribal sovereignty. One thing that doesn’t get said enough about Justice Gorsuch is that he was endorsed by Native Americans. And he hasn’t dodged that after getting appointed to the Supreme Court. I mean, conservatives widely criticized his opinion in McGirt v. Oklahoma, which said that much of eastern Oklahoma is Native American land.

Do you have advice for current members of Congress?

I would just remind people that if you don’t get reelected, it’s not the end of the world, for goodness’ sake. I mean, I look at my colleagues in the Republican Party and they’re cowering in the corner, saying, "Trump just tweeted this. What are we going to say?"

Just say what you think, which is, "This is crazy! We’re in crazy land right now!" So that’s my advice. And you know what? If you don’t get reelected, the world doesn’t end. No one’s going to snatch your firstborn. [Laughs]

Would you ever consider running for office again?

When I lost my race for governor of North Dakota in 2000, people would ask me that. And I would say, "It would have to be the right opportunity."

I was only 44 at the time, and I was recovering from breast cancer. Now I’m older, and I think electoral politics is kind of a young person’s game. And I’ve got other ways that I can work on the things that I care about, whether it’s dealing with Indigenous people’s rights, establishing climate policy that can actually get consensus in this country, or using the tax code to promote more equal economic opportunities.

I feel motivated to work on the outside to achieve all of those things. Politics have never motivated me as much as being part of a group of people who craft solutions.