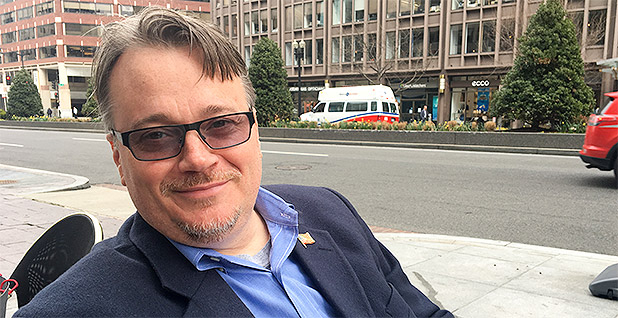 George David Banks, who was President Trump’s international energy adviser and an aide to Sen. Jim Inhofe (R-Okla.), is teaming up with a handful of other Republicans to advance climate policies aimed at securing conservative support. They think their party has faltered by ceding the climate policy space to the left, and they want to get back in the game.

The move comes after leading Republican politicians have shied away from discussing climate policy in recent years or outright decried the idea. Moderate Republicans who long ago supported climate change legislation and other initiatives have backtracked, and the U.S. electorate voted for a president who famously called climate change a "hoax."

But Republicans — some of them, at least — are wading back into the debate. The initiative by Banks comes as Rep. Carlos Curbelo (R-Fla.) is preparing to introduce legislation this week that would pause federal regulations on climate change in exchange for an escalating tax on carbon emissions (Climatewire, July 17).

It remains a thorny issue for Republicans. Case in point: As Curbelo prepared to unveil his carbon tax legislation, House Republicans introduced an anti-carbon-tax resolution that called the policy harmful to the U.S. economy. Only six House Republicans sided with Democrats in opposition to that resolution.

Banks and his colleagues are trying a different approach.

Rather than tackling climate change through sweeping legislation like a carbon tax or a cap-and-trade program — which most Republicans are leery to support — they envision kicking off a national policy debate to find areas of common ground on climate.

The group, called the Center for Energy Security and Climate Economics, is a project of the think tank American Council for Capital Formation.

"You have some Republicans who back a carbon tax, but in our opinion, that’s not a real climate policy when it comes to a climate policy that has its roots in a national consensus," Banks said.

Johnston, another former Inhofe aide, added that last week’s House vote "makes clear that the political compromise isn’t there to support something like that."

Past attempts to legislate cap-and-trade programs or to tax greenhouse gas emissions have fizzled on Capitol Hill, even when Democrats controlled the White House and both chambers of Congress. The likelihood of passing a major climate bill with the GOP in control is basically zilch.

"What resonates is jobs and efficiencies and creating prosperity and opportunity," said Dillon, a former aide to Sen. Lisa Murkowski (R-Alaska). "The conversation around this has always been about limiting opportunity."

The new group plans to advance smaller efforts that might be politically salable to both sides of the aisle.

"We’re looking at policies that make incremental improvements, and that’s the way Congress should look at it," Dillon said.

They’re sure to face criticism from the left that their policies aren’t aggressive enough to combat climate change. Some argue there’s no hope for meaningful climate change policy with Trump in the White House.

"The main obstacle to climate action by Republicans today is not primarily economic, but instead Trump’s nihilistic political strategy that risks the security and well-being of average Americans by inciting anti-science extremism among his base," said Paul Bledsoe, strategic adviser at the Progressive Policy Institute. "While this new effort might matter at the margins, it doesn’t confront the big lies at the heart of the Republican Party under Trump. It seems only an election can do that."

"Richer U.S. states should be expected to do more than poorer U.S. states," Banks said. "The regional disparities, the income gap between states needs to be accounted for."

Many of the poorest states in the country are conservative strongholds with energy-intensive industries, so accounting for that income gap might be a way to lure some Republicans to the table.

The group says it also advocates "a robust innovation agenda that enhances U.S. leadership in nuclear and renewable energy technologies and promotes the cleaner, more efficient global use of fossil fuels." It opposes "onerous regulation or strategies that obstruct innovation and damage our energy security."

Banks laid out some of his ideas in an op-ed in The Hill newspaper yesterday.

The Republicans aren’t against shareholder activism on climate, per se, Banks said. "We just want to make sure that climate-, energy-related proposals are based on real scenarios and that they seek to improve the value of the stock in a way that benefits publicly traded companies in the U.S. interest."

He lamented a surge of activist initiatives aimed at prodding divestment from fossil fuels. "That’s not in the interest of anyone, I would argue," he said. Forcing publicly traded companies to stop producing fossil fuels won’t make state-owned enterprises around the world halt their fossil fuel production, Banks said. "You harm the innovation agenda that’s required for deep emissions cuts."

He and his colleagues recognize that they’ll get pushback from both sides, but they think they can muster enough support to get traction with moderates on both sides of the aisle, officials in the Trump White House and even among some who don’t believe in climate change.

"Climate change policy is not going to go away," Banks said. "There’s a recognition that if you have a Democrat in the White House, whoever that is is going to probably go back to the Obama playbook and push a hefty regulatory agenda, and this is something we want to try to pre-empt, and we want to make sure that we do what we can to put the GOP in a strong negotiating position on climate change policy."