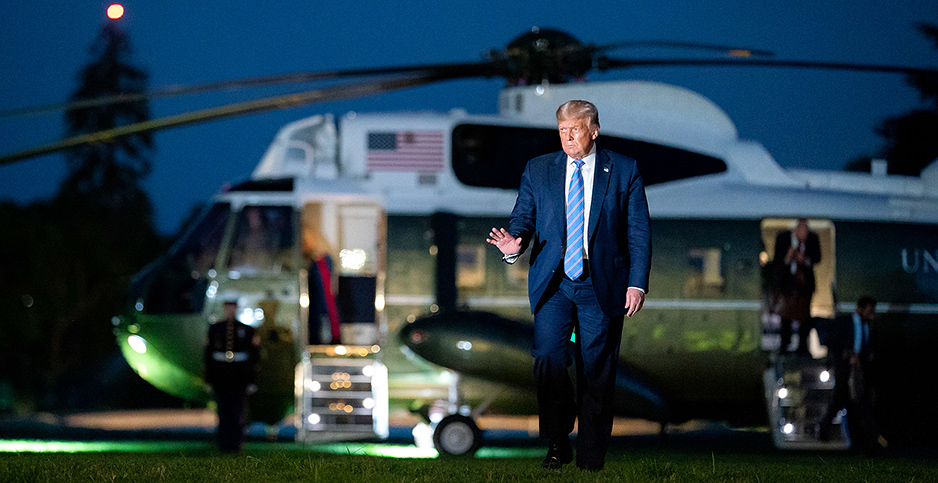 President Trump exiting Marine One on the South Lawn of the White House. Tia Dufour/White House/Flickr

Donald Trump promised American energy dominance when he ran for president, offering a full-throttle embrace of coal, oil and gas and a pledge to hack away at a regulatory thicket he said hampered production.

Now, as Trump leaves office tomorrow, his energy legacy, like much of his record, is up for debate.

For many in the industry, Trump’s fossil fuel boosterism and aggressive deregulation agenda were welcome after what some viewed as eight years of Obama-era hostility and overreach.

"From the beginning, President Trump stood up to the green left, the media, bullies like [Democratic former California Gov.] Jerry Brown, and big business who constantly urged him to take the path of least resistance," said Tom Pyle, president of the conservative American Energy Alliance. "He inherited an Environmental Protection Agency that had taken a wrecking ball to the American economy and ordered it to slash the duplicative and harmful regulations that were hampering our energy producers."

Pyle, who led Trump’s Energy Department transition team after the 2016 election, added: "Trump has an energy policy. Democrats have a carbon constraint policy. That is the fundamental difference."

But Trump’s detractors say the president, who pulled the United States out of the Paris climate accord soon after taking office, set the globe back on efforts to tackle climate change — and worsened pollution at home.

"Trump’s dangerous and baseless denials of climate change have made the United States an outlier in the efforts to cap global warming," said former New Mexico Gov. Bill Richardson (D), who served as Energy secretary under President Clinton. "Trump’s widespread rollbacks of over 100 environmental rules has led to fewer protections for our country’s water, air and land."

There is some common ground. Richardson, though he said he’d give Trump a D-minus for his overall energy policy, did credit Trump for negotiating with Saudi Arabia, Russia and OPEC on oil prices.

Trump last April helped secure a truce among the world’s largest oil producers to trim production as the coronavirus pandemic hammered demand for petroleum across the world, causing prices to plummet.

Analysts at the time said the oil deal would have been difficult to pull off without Trump’s participation.

"While we still lack a firm agreement, we need to be talking with other countries, especially Russia, and I am glad he opened up this dialogue," Richardson said.

Yet Richardson faulted Trump for downplaying renewables and clean energy, even as the alternative power sources were increasingly embraced by the market and state governments.

Yet as Trump routinely bashed wind turbines and questioned the cost of solar power, his Department of Energy continued to focus on renewable energy research. And his two Energy secretaries — Rick Perry and Dan Brouillette — earned generally positive reviews for capably running the department and mostly avoiding the turbulence and headlines generated by other agencies.

Trump devoted portions of his campaign speeches in 2020 to decrying energy efficiency standards for toilets, sinks, dishwashers and showers, and under his tenure, DOE has eased a number of efficiency requirements for household and commercial appliances and missed more than two dozen deadlines for tightening efficiency standards.

Fourteen states and environmental and consumer groups have sued DOE for what they say has been a failure to update standards for everything from commercial air conditioners and refrigeration systems to home appliances like microwave ovens.

Just last week, DOE sided with the gas industry, issuing a ruling that will allow less energy-efficient furnaces and water heaters to remain on the market.

Trump supporters and anti-regulatory groups, including the Competitive Enterprise Institute, have welcomed some of the measures, arguing that improved, energy-efficient models should sell on their own merits and not require a government mandate.

Trump in office routinely called for cutting major parts of the department, only to be rebuffed by Congress, which replenished DOE’s coffers.

DOE’s operating budget has grown more than 25% in the past four years, in large part due to a massive nuclear weapons modernization strategy.

Several energy analysts pointed to the overhaul of the Nixon-era National Environmental Policy Act last July as Trump’s most significant accomplishment on energy. The move slashed the "overly burdensome regulations plaguing the energy industry," Brouillette said at the time. The Department of Energy responded by saying it would no longer need to review the environmental effects of liquefied natural gas construction projects.

"This should be a win for conventional and renewable energy projects alike," Nick Loris, an energy analyst at the right-leaning Heritage Foundation, said of the Trump administration’s NEPA rewrite. "It’s a half-a-century-old law that has not kept up with the pace of innovation and has instead been used as a way to stall or slow the development of many projects." He called a modern NEPA a "win for economic development and environmental progress."

Still, Loris said he would give Trump an "incomplete" for his energy record, noting that it’s unknown how much of his work will be reversed by the incoming Biden administration.

"In terms of legacy, perhaps the biggest benefit was to simply to pump the brakes on costly, ineffective regulations that would’ve occurred under a [Hillary} Clinton administration," Loris said, arguing that the market and private sector have shown they can deliver economic and environmental benefits.

And Loris noted that the Trump administration took steps to improve government efficiency, including the Bureau of Land Management reducing the time frame for oil and gas permitting on federal land.

But he added that Trump’s preference for tariffs, including on steel, aluminum and foreign-made solar panels and cells, increased the costs of energy projects and created uncertainty in the industry.

Trump also failed to convince his own Federal Energy Regulatory Commission to adopt his effort to subsidize the coal industry, though his administration did roll back numerous environmental regulations to try to fulfill his campaign promise to revive the fossil fuel. That included reversing Obama-era coal regulations, such as the Stream Protection Rule, which created new water quality standards, and the Mercury and Air Toxics Standards, which curbed emissions at power plants.

Still, the coal industry lost more power plants during Trump’s term than it did during President Obama’s last four years in office as utilities switched to cleaner and less expensive natural gas and renewables.

"He’s rolled back regulations that compromise people’s health, but do not rescue industries like coal," said former EPA chief and New Jersey Gov. Christine Todd Whitman (R), who criticized Trump as a "bully" during the 2016 election and endorsed then-Ohio Gov. John Kasich (R) for president.

"Coal isn’t dying because of environmental regulations; it’s dying because there are easier forms of energy to extract. He’s playing to a small part of the industry with things weakening regulations on toxic coal ash on disposal," she said.

"Instead of getting ahead on climate change and investing in new technologies, he just wouldn’t acknowledge this as a real issue," she said. "He didn’t make the kind of infrastructure investment that we could have had."

Kathleen Sgamma, president of the Western Energy Alliance, said she would give Trump a "high B-plus," noting that it would have been higher, but she’s concerned that the administration in the past six months has slowed its approach, leaving it susceptible to rollbacks by the Biden administration.

"They’re going to have stuff that was really significant that could be overturned by Congress," she said, pointing to the administration’s move to roll back methane emissions regulations for the oil and gas industry, along with the NEPA overhaul. "They took significant action to make the regulatory environment on public lands more predictable, but this last six months, they just couldn’t get it over the line."

"It would be pedantic to even try to parse the awfulness of the Trump agenda, so suffice it to say that Donald Trump was the worst president in our history when it comes to the environment (and so much else)," Brune said, adding that President-elect Joe Biden and his running mate, Vice President-elect Kamala Harris, by comparison, "campaigned on the most ambitious climate and environmental justice plan in our nation’s history."