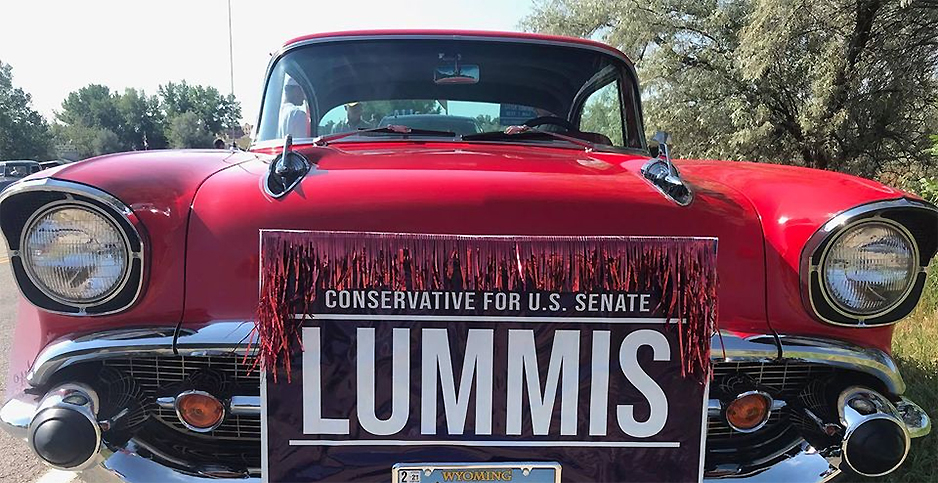 A vintage car carrying a sign for Senate hopeful Cynthia Lummis. The Wyoming Republican used to serve in the House. Lummis/Facebook

Wyoming’s energy- and tourism-heavy economy has been hit hard this year by low fuel prices, COVID-19 restrictions on travel and the overall economic depression.

The former Republican congresswoman, on track to be the state’s next U.S. senator, wants to make sure President Trump can keep rolling back regulations and help the oil, natural gas and coal companies.

Democratic candidate Merav Ben-David, a wildlife ecology professor at the University of Wyoming, sees the state’s reliance on the fossil fuel industry as a problem.

"By sticking to that rut, by staying in that track, we’re going to fall off a cliff," she said. "We are falling off the cliff now."

The candidates’ differing views on the future of the energy industry in Wyoming show one of the widest gulfs between them as they face off in the general election.

To be sure, Ben-David faces a steep climb and Lummis is nearly certain to win. A Democrat hasn’t won a Senate race in Wyoming since 1970.

"I’m not saying it’s not going to be challenging," Ben-David said. "I’m not ignoring the history. But I’m very optimistic."

Jim King, a political science professor at the University of Wyoming, said Ben-David’s message will be attractive to some voters, but Lummis’ views are more in line with the bulk of the state.

"There is an audience for that perspective, but as a whole, the thrust of the population — they’re not climate deniers, but the focus is on energy development, since that’s such a large proportion of the economy," King said.

"She’s probably the most conservative that we’ve had in Washington for 40 or so years," he said. "She was more conservative even than other members of the [Wyoming] congressional delegation had been."

‘As clean as possible’

Though the race isn’t one of the nation’s most competitive, and campaigning in Wyoming isn’t expensive, Lummis has dominated on fundraising.

Lummis said Wyoming’s fossil fuels are needed more than ever and cited developments like recent electricity supply issues in California.

But Lummis is also ready to put a new focus on reducing emissions. That doesn’t mean reducing the use of fossil fuels, however.

Lummis’ other priority in the Senate would include boosting the use of domestically sourced uranium — a material mined predominantly in Wyoming — and increasing recreation access on public lands.

As for Ben-David, Lummis didn’t have much to say. "I’ve honestly got to say, I just don’t know her very well," she said.

Ben-David, a native of Israel and political newcomer, said her studies over the last two decades have focused on the human impact on ecosystems, via climate change, pollution, logging and other means. It’s that research that got her concerned enough to run for office.

"In many cases, we have been too optimistic. … I hate to say this, but Mother Nature is proving me right. Things that we have projected based on our careful, moderate, scientific procedures, and expected them to happen in 2050 or 2100 are actually already happening today," she said.

Lummis, she said, wasn’t an effective representative for the state in the House and won’t be in the Senate.

"Cynthia Lummis, in eight years in Congress, failed to pass any significant legislation. Even her colleagues ignored her. Some of the most important pieces of legislation passed by Congress that could have brought more money from the federal government, she wasn’t even included in the discussion," she said.

"There is a different energy this time, a different level of enthusiasm. I can’t tell you how many people say they’re Republicans who wrote me in for the primary," she said.