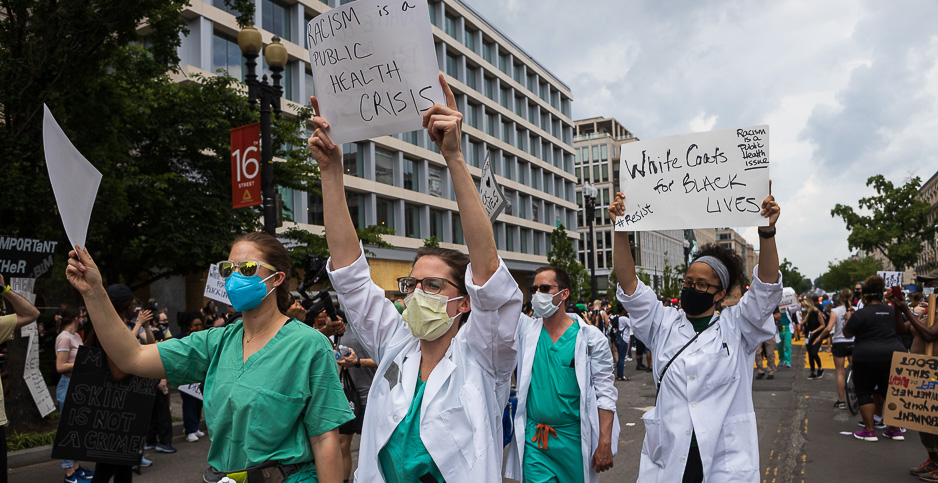 Protests near the White House this week against police brutality and racial discrimination. Francis Chung/E&E News

At least two congressional committees injected environmental justice yesterday into the larger national conversation about racism in America, but there were few signs that Congress will take concrete action anytime soon.

Witnesses told the Energy and Commerce Subcommittee on Environment and Climate Change that communities of color suffer wildly disproportionate effects from pollution and the ongoing pandemic during a virtual hearing that coincided with the funeral for George Floyd, the unarmed black man killed by police in Minneapolis.

The hearing comes as protests over Floyd’s death continue around the country and after initial data from the Centers for Disease Control and Prevention found higher COVID-19 death rates among African Americans.

But even as both parties draw up legislation to address unjust policing and civil rights, the prospects for congressional action appear limited (see related story).

Lawmakers on both sides of the aisle proclaim to care about environmental justice communities, but the issue is often caught up in the larger partisan battle surrounding the future of fossil fuels.

At the Energy and Commerce hearing, for instance, witnesses and Democrats pointed to a preliminary study from researchers at Harvard University that linked exposure to fine particulate matter to higher COVID-19 death rates.

The widely publicized study has not yet been peer-reviewed, and several Republicans used their time to cast doubt on the research.

Rep. David McKinley (R-W.Va.) pointed to communities in his state suffering economically from the flailing coal industry and the pandemic lockdown.

"Tying air pollution to COVID-19 — really? Seriously?" McKinley said, directing his comments toward majority Democrats. "It is a simplistic answer to a complicated question. Once again, you are taking advantage of a public health crisis to justify your party’s agenda against fossil fuels."

Instead of reducing pollution, Republicans prescribed an economic remedy for environmental justice in communities suffering under the weight of COVID-19.

Specifically, they homed in on opportunity zones, a bipartisan program created in the 2017 Tax Cuts and Jobs Act that offers tax benefits for investments in low-income areas.

"If we care about these communities, we need to reopen the economy and do it safely," said full committee ranking member Greg Walden (R-Ore.).

‘A huge amount of money’

Shay Hawkins, president of the Opportunity Funds Association, told the panel the designated regions are home to 475 solar installations and 127 wind farms producing at least 1 megawatt of capacity.

But for community advocates, the focus on jobs, to the exclusion of fossil fuel pollution, misses the point.

As a public health matter alone, Ali said, "these injustices cost our country a huge amount of money." And the convergent effects of pollution and the pandemic are nonetheless stark.

All told, 71% of African Americans live in counties that are in violation of federal air pollution standards, Jacqueline Patterson, senior director of the NAACP’s Environmental and Climate Justice Program, told the panel.

"To add to the injustice, African American and Latino American people are typically exposed to 56% and 63% more PM2.5 pollution than they produce through consumption and daily activities," Patterson added.

Given that data, the conversation should not be about preserving fossil fuel jobs, Patterson said, but rather how to help communities transition to new livelihoods once the industry bites the dust.

The framing of the debate should be about "front-line communities’ quest for health and survival," she said.

"The injustice has been magnified," said Ben Beachy, director of the Sierra Club’s Living Economy Program, said about the COVID-19 crisis.

Jason Walsh, executive director of BlueGreen Alliance, a national partnership of labor unions and environmental organizations, has experience working with coal communities in Appalachia under the Obama administration.

He said there are lessons learned from coal transitions that can be applied and replicated "to include investing early and at scale in economical diversification."

"It involves investing in entrepreneurs and emerging industry sectors," Walsh explained during the forum.

‘What can we do differently?’

Democrats, notably, did not include any environmental justice provisions in the policing reform legislation they drew up this week in response to Floyd’s death.

But they did include the "Environmental Justice COVID-19 Act," H.R. 6692 in the "Health and Economic Recovery Omnibus Emergency Solutions (HEROES) Act," the broad pandemic response legislation the House passed last month on a mostly party-line vote.

H.R. 6692, from Rep. Raul Ruiz (D-Calif.), would authorize $50 million in environmental justice grants, but like much of the "HEROES Act," it has a hazy future.

Senate Republicans have been hesitant to support additional COVID-19 legislation, and Majority Leader Mitch McConnell (R-Ky.) has been particularly critical of what he sees as the wish list of liberal policies in the "HEROES Act."

Those rollbacks, Ali said during the Energy and Commerce hearing, make "overburdened communities more vulnerable, now and in the future."

But at the very least, even with political gridlock around the future of fossil fuels, COVID-19 "has magnified the inequities that we already knew existed in our society," said Rep. Lisa Blunt Rochester (D-Del.).

"I like to celebrate our successes," she said. "But I feel that at this moment, part of what each of us individually and collectively have to do is hold up a mirror to ourselves and say, ‘What can we do differently?’"