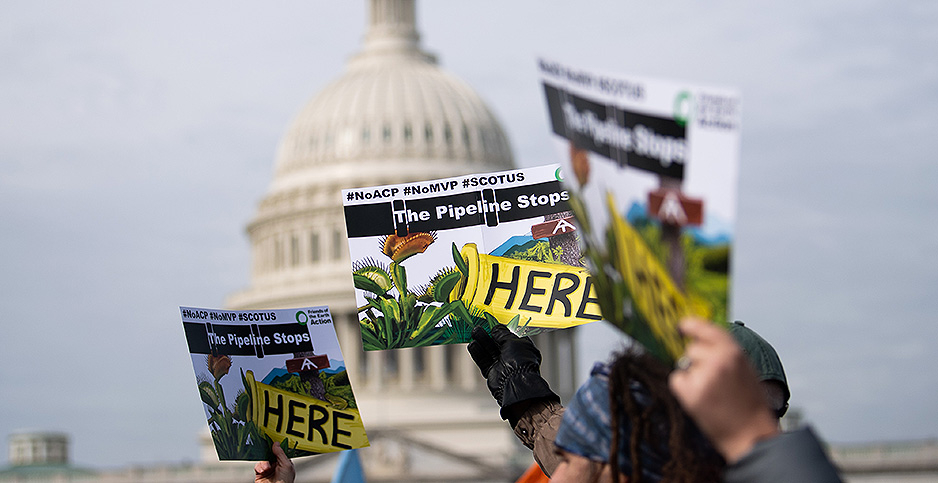 Opponents of the Atlantic Coast pipeline outside the Supreme Court near the Capitol earlier this year. Kevin Dietsch/UPI/Newscom

Twin developments that have disrupted two major oil and gas pipeline projects in as many days have fossil fuel supporters on Capitol Hill crying foul but drawing praise from environmentalists and like-minded Democrats.

The state’s lawmakers called for an immediate appeal of what Sen. Kevin Cramer called "a terrible ruling" (Greenwire, July 6).

"Shutting down the Dakota Access Pipeline would have devastating consequences to North Dakota and to America’s energy security," Cramer said in a statement.

Sen. John Hoeven touted the controversial project’s safety record, while calling for an appellate court to let the pipeline resume operations as its owners work to complete a new environmental review.

"The pipeline is equipped with the latest safeguards and technology, and after undergoing years of thorough state regulatory reviews and an extensive federal environmental assessment, it has been operating safely since 2017," Hoeven said in a statement.

He noted that the ruling "comes at a very difficult time because it will severely impact our state’s economy at the same time we are working to recover from the impacts of the COVID-19 pandemic."

"West Virginia is energy rich, and we should make it easier to use energy resources produced right here at home to meet demand across the country," Capito said in a statement.

Democratic Sen. Joe Manchin, ranking member of the Energy and Natural Resources Committee, said he was disappointed by the decision to cancel the project.

"The pipeline would have created good paying construction and manufacturing jobs for hard working West Virginians, reinvested in our energy markets increasing our domestic energy supply, and strengthened national security with reliable energy to key military installations," Manchin said in a statement.

He called for passing the committee’s bipartisan energy package, which remains stalled by an amendment dispute over regulating climate-warming superpollutants (E&E Daily, June 29).

Even though the "American Energy Innovation Act" doesn’t have provisions to accelerate pipeline reviews, it proposes a number of energy infrastructure provisions, according to a summary.

Adding to the regulatory and legal obstacles for pipelines, the U.S. Court of Appeals for the District of Columbia Circuit ruled against the Federal Energy Regulatory Commission’s use of so-called tolling orders.

The D.C. Circuit ruled against a process that has kept landowners from being able to challenge FERC approvals in court even as project construction gets underway.

"Following the [D.C. Circuit decision] in Allegheny Defense Project v. FERC, we respectfully ask Congress to consider providing FERC with a reasonable amount of additional time to act on rehearing requests involving orders under both the Natural Gas Act and the Federal Power Act," Chatterjee and Glick wrote.

Landowners cheered the D.C. Circuit ruling, and environmentalists and Democratic lawmakers welcomed the setback for Dakota Access and the demise of Atlantic Coast.

"Think of all the doom and gloom we heard for years about the need to rush these projects through, and all the completely unrealistic job numbers we kept getting shoved down our throats as we asked simple questions about environmental impacts," Rep. Raúl Grijalva (D-Ariz.) said in a statement.

"A more democratic, inclusive, sustainable energy economy is possible if we follow our laws and listen to the people our decisions impact the most," said the House Natural Resources Committee chairman, who led three dozen members of Congress in opposing Dakota Access in a May legal filing (Energywire, May 22).

"In the meantime, any company thinking of trying to repeat the playbook these companies used to cut corners and steamroll impacted families is now on notice," he said.

Similar to the Keystone XL project, Dakota Access became a rallying cry for the left, with massive protests in 2016 and 2017.

Environmental group 350.org also hailed the projects’ troubles as "massive victories for people and the planet."

"Big Oil’s business model has always been at odds with the fight for racial and economic justice, Indigenous sovereignty, and a safe climate," 350.org’s Kendall Mackey said in a statement. "To build a just and equitable future, we must keep fossil fuels in the ground."

But Rep. Rob Bishop (R-Utah) said the recent pipeline developments are "more reminders that activist judges and special-interest litigants are determining the fate of our national and energy security."

Bishop, the top Republican on the Natural Resources Committee, said, "These developments should be deeply concerning for every American at every socioeconomic level."

Last night, the Supreme Court delivered mixed news to the energy industry. It allowed the Army Corps of Engineers to resume using a streamlined water-crossing permit for pipelines, but it did not lift a legal hold on the Keystone XL project.