Fox takes on weather — but what about global warming? 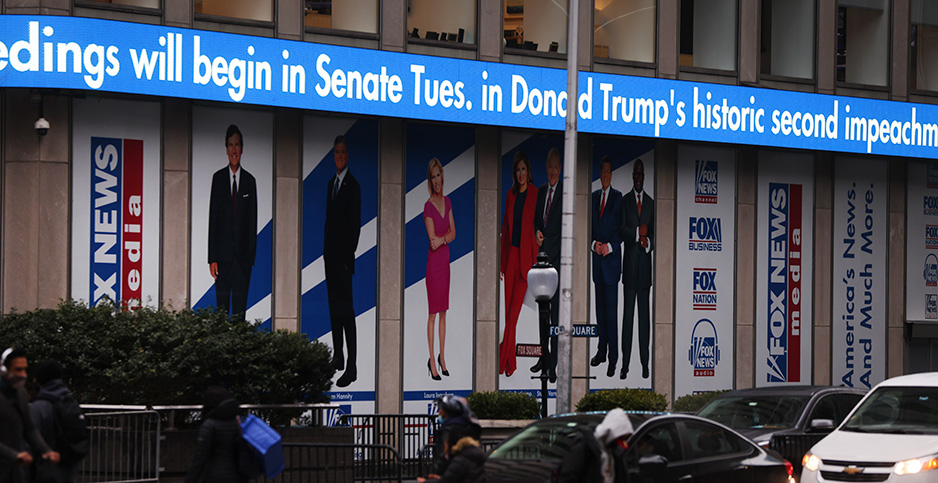 Plans by Fox News Channel’s parent company to launch a dedicated weather channel have prompted concern from some scientists and observers about how the channel will handle climate change science in its programming.

The New York Times yesterday reported plans by Rupert Murdoch’s Fox Corp. to launch Fox Weather later this year as a streaming service, taking on the long-dominant Weather Channel, as well as local and national news networks that report on weather. Fox had previously announced the plans in December, though yesterday’s story got far more attention.

The news spurred both worry and mockery about whether the notoriously conservative and brash editorial style central to Fox News’ brand will be featured in weather reports.

"Sponsored by Sharpie," joked Raw Story, quoting a Twitter user making reference to former President Trump’s famous 2019 edit of a hurricane forecast map to speculate about how Fox Weather might weave conservative ideology into its broadcasts.

And, crucially, will Fox Weather avoid talking about human-induced climate change and its links to extreme weather, hotter summers, increasing drought and other transformations — or, worse, deny the connection?

Fox has made it clear that the weather service will be completely editorially separate from its other networks and conservative hosts like Sean Hannity, Tucker Carlson and Laura Ingraham. It has hired numerous people in leadership roles and meteorologists with deep mainstream resumes, some of whom have explicitly said they believe the consensus science on climate.

A spokesperson told the Times that the network will have "a dedicated team of leading meteorologists and experts" that will offer "in-depth reporting surrounding all weather conditions, and we are excited to showcase to viewers what a full-service comprehensive weather platform can deliver beginning this fall." The company wouldn’t comment further.

But Murdoch’s company "has been the greatest promoter of climate change disinformation over the past two decades. It has been wielded by Rupert Murdoch and the fossil fuel interests he promotes as a weapon against meaningful climate action," Michael Mann, an atmospheric scientist at Pennsylvania State University and frequent climate commentator on cable news, told E&E News.

"We should assume, unless proven otherwise, that this network will be used to further promote climate denialism and fossil fuel industry talking points," he added.

Media Matters for America, a liberal media watchdog that often documents climate denial and other false or misleading statements on Fox, said the network’s coverage of weather "has proven to be terrible, and there’s no reason to believe that in the big picture, Fox Weather will be any better."

Emily Atkin, author of the Heated newsletter and an outspoken critic of media coverage of climate, compared Fox Weather to what would happen if the people who popularized COVID-19 denial launched a medical news outlet.

And she worried that good journalists would go to work there and not be able to tell the truth on climate.

"We all know what it’s like to work somewhere where you know the big boss is ideologically opposed to certain truths. You shy away from covering things that might upset the higher-ups or trigger them because you don’t want to deal with their backlash. No one tells you to do this; you just do. I’ve seen it happen so many times," she told E&E News.

"This place is going to offer big salaries and attract good weather reporters who are likely to self-censor on climate for the sake of their sanity and job security."

But others see room for optimism.

As the Times noted, Murdoch sees weather as an opportunity for significant growth. But getting political or ignoring significant facts like climate could turn off viewers.

"My guess is that they think this is going to make a lot of money and that’s the most important thing, and they don’t really care if Fox Weather is saying climate change is real and the editorial side is continuing to deny it. There are all sorts of internal contradictions like that at Fox," said Andrew Dessler, a geosciences professor at Texas A&M University who worked in the White House Office of Science and Technology Policy under President Clinton.

Climate denial might also be risky for recruitment, Dessler reasoned.

"And I don’t think there are enough good meteorologists out there at this point who don’t believe in climate change," he said, noting that many television meteorologists, even in local news, have started linking weather to climate change in their reports in recent years.

Dan Kennedy, a journalism professor at Northeastern University, said Murdoch "has no ideology" except to make money.

"I would guess that they are probably going to be [a] fairly straightforward weather operation, with a lot more flash, a lot more graphics, a lot more of the drama that Fox is always able to whip up, versus what you would see on the Weather Channel," Kennedy said.

But the drive to make money could end up taking the network in different directions, he warned.

"If the people running the Fox Weather channel think that acknowledging that climate change is real and even doing some reporting on it is good for revenue, then they’ll do it. And if they think being full-throated climate change deniers is good, they’ll do that, too."