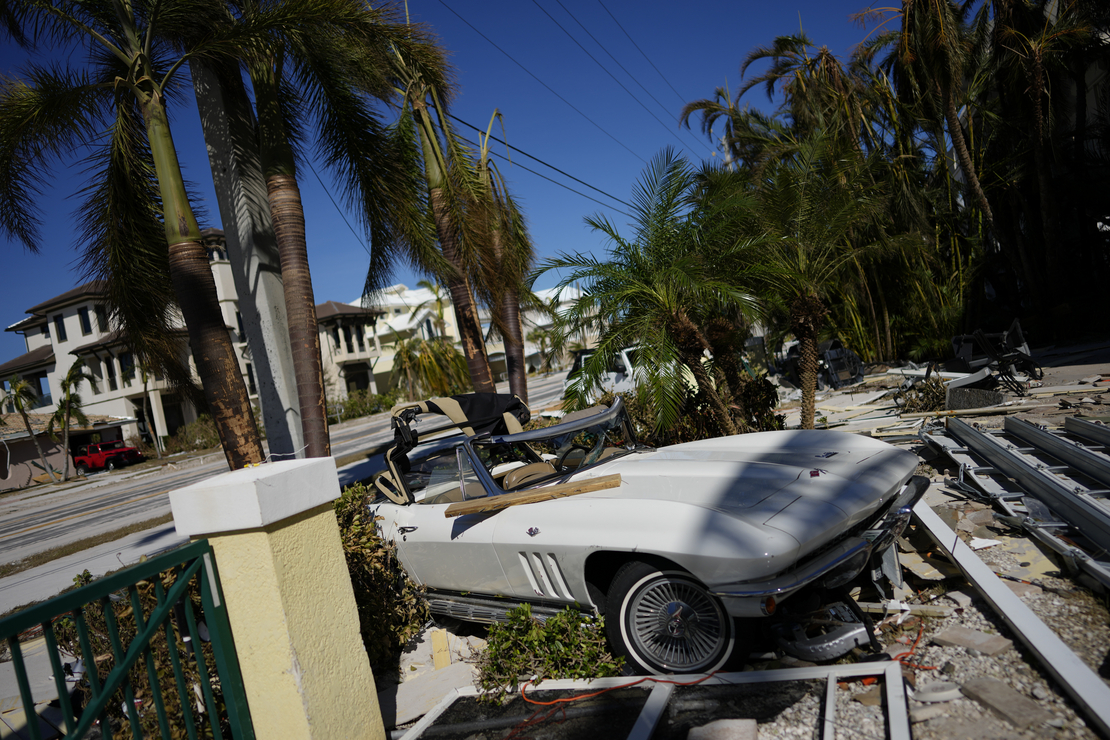 Florida’s largest electric company has returned power to a majority of its customers after Hurricane Ian tore through the state last week, but it said the storm’s torrential rain and flooding have remained barriers for some of the hardest-hit areas.

Florida Power & Light Co. CEO Eric Silagy said over the weekend that past efforts to bury power lines and replace wooden poles with concrete or steel ones paid off. The utility’s transmission structures stood firm, he said, and the underground power system fared better than the poles and wires that remained above ground.

“We are not really rebuilding our system as much as we thought we were going to,” Silagy said during a news briefing Saturday evening.

But crews have had to reach some parts of FPL’s system by air boats and high-water vehicles. In Volusia County, home of Daytona Beach, crews used a kayak to get to a substation, which had 3 feet of water inside.

“Electricity and water don’t mix,” Silagy said. “We have to wait until the floodwaters recede in order to get the power back on.”

Over 600,000 Florida customers — including a considerable chunk from FPL — remained without electricity Monday morning, according to PowerOutage.us. That was down from at least 2.7 million Florida power users without grid electricity Thursday, a federal report indicated.

Also Monday morning, PowerOutage.us showed a relatively small number of outages in other parts of the U.S. East Coast that were affected by Ian and its remnants.

Ian — a Category 4 storm — slammed into Florida’s west coast Wednesday, dumping at least 17 inches of rain in some parts of the state. The hurricane’s 150-mph winds toppled trees and destroyed homes and businesses, and life-threatening storm surge washed away bridges and other infrastructure.

More than 44,000 workers from 33 states and Washington, D.C., traveled to Florida to help restore electricity, according to the Edison Electric Institute, the trade group for the nation’s investor-owned electric utilities. Over 12,000 workers were committed to help with power restoration in South Carolina, North Carolina and Virginia, EEI said.

Silagy, the FPL chief executive, said the company’s power grid investments have allowed it to restore electricity more quickly than in the past. The company is on a restoration pace that’s faster than that of Hurricane Irma, a Category 4 storm that hit Florida in 2017.

“That’s a testament to the investments that we have made,” Silagy said.

Silagy spent days in southwest Florida assessing damage to the hardest-hit areas. He said he saw buildings knocked off their foundations due to Ian’s unprecedented storm surge and warned that many homes and businesses on barrier islands and the coast aren’t structurally sound enough to receive electricity.

In other places, concrete poles stand alone, having no businesses or homes to deliver power to because the structures have been destroyed, he said.

FPL is one of three investor-owned utilities in Florida. Municipalities and electric cooperatives serve the state as well, including some areas that have been among the hardest hit.

Ian knocked out power to more than 300,000 electrical cooperative customers in Florida, with co-op officials warning that repairing parts of the grid and restoring electricity may take weeks to finish in some areas, the National Rural Electric Cooperative Association said.

Public power utilities also help each other restore electricity after a natural disaster through their own mutual-assistance programs.

But, worried that many customers in popular coastal cities lacked power Saturday, Florida Gov. Ron DeSantis (R) called out Lee County Electric Cooperative to get outside power companies to help.

Lee County is home to Cape Coral, North Fort Myers and Sanibel and Pine islands, areas that were among the hardest hit by Ian. In a news release Sunday, the cooperative said more resources have been arriving as the area faces an “unprecedented recovery” that will require substantial rebuilding in certain areas.

In a news conference Saturday, DeSantis said he spoke with Silagy, asking if FPL could help.

“This is something we were concerned about because of the supply chain, and Eric and some of his other peer companies said, ‘We’ve got infrastructure, we have the ability to help,’” the governor said.

Indeed, the increase in intensity of hurricanes is among the issues at play when the utility industry has raised concerns about a misalignment between supply and demand. When asked whether FPL faced any shortages of material at the Saturday evening press conference, Silagy responded quickly with one word.

Silagy said FPL goes into storm season with enough transformers, breakers, wires, poles and other equipment to handle a Category 4 storm or stronger.

“We are in good shape from a material standpoint,” he said.

As for helping Lee County, Silagy said the nation’s electric companies — investor-owned and municipal providers as well cooperatives — know everyone works together and that the public power utilities also prepare for hurricanes.

“I’m happy that the governor raised the fact that, frankly, we all work together as an industry,” Silagy said. “There are no boundaries as far as I’m concerned, and there’s no politics involved when it comes to storm restoration.”

Damage from Ian varied as the storm traveled up the East Coast and into Virginia over the weekend. In its home state of North Carolina, Duke Energy Corp. reported broken poles and downed power lines as well as a combination of strong winds and saturated ground that was taking down trees.

In South Carolina, Pawley’s Island, a beach community roughly 75 miles up the coast from Charleston, was coping over the weekend with power losses to many residents, the Associated Press reported.

Dominion Energy Inc. warned that more power outages could be on the way in Virginia as Ian’s forecast showed the potential for strong, gusty winds in coastal areas starting Sunday night.

President Joe Biden approved an emergency declaration for North Carolina and has spoken with the governors of Florida and South Carolina, according to the White House. The Associated Press said dozens of deaths have been reported in Florida in the wake of Ian.

Ian isn’t the only storm that has recently wreaked havoc on the United States. Hurricane Fiona dumped rain on Puerto Rico — a U.S. territory — last month, causing flooding and knocking out power to the entire island. Power restoration still continues in Puerto Rico.

Fiona — a Category 1 storm — hit Puerto Rico on Sept. 18 and dumped large amounts of rain. On Sunday, LUMA Energy LLC said it had restored electricity to over 1.34 million customers — or roughly 92 percent of total customers. Still, questions have remained about the pace of recovery and the reliability of Puerto Rico’s grid.

The western and southern regions of Puerto Rico suffered the most damage, including roads, bridges and electrical infrastructure. Parts of those areas may not receive electricity until Oct. 6, LUMA said in a news release Sunday.

Federal infrastructure legislation and the recent Inflation Reduction Act contain billions of dollars in funding that will go toward electric grid projects and resiliency.

That could be an opportunity for Florida and Puerto Rico to rebuild their power systems, with an eye toward making them less vulnerable to storms, said Lee Peterson, an attorney who is manager for project finance and consulting at the accounting firm CohnReznick.

“We’re all still as a nation at the front end of a bunch of historic spending as it relates to green infrastructure and energy infrastructure,” Peterson said.