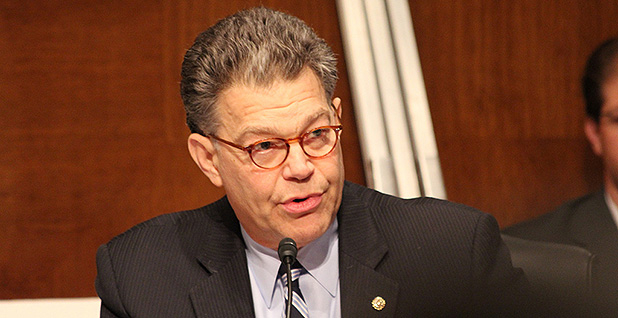 Sen. Al Franken (D-Minn.) is set to make an announcement today about his future. John Taylor/Flickr

Speculation swirled yesterday that Minnesota’s Al Franken (D) would end his Senate tenure today. If true, the development sets up a consequential Senate race next year.

Though Franken’s office initially said no decision had been made, yesterday evening his office tweeted that he "plans to make an announcement in D.C. tomorrow."

As sexual harassment allegations piled up in recent weeks, Franken stood firm, apologizing for past behavior — while not admitting to it. Some observers expected him to endure and carry on with a reduced role.

But a seventh accuser emerged yesterday morning. A former congressional aide said Franken tried to forcibly kiss her in 2006 after a session for his radio show, saying, "It’s my right as an entertainer," according to a Politico report.

By day’s end, more than 30 of Franken’s fellow Democratic senators had called on him to leave, and an eighth woman came forward in The Atlantic to accuse Franken of groping her during a President Obama inauguration party.

Six Democratic female senators — Kirsten Gillibrand of New York, Claire McCaskill of Missouri, Maggie Hassan of New Hampshire, Mazie Hirono of Hawaii, Kamala Harris of California and Patty Murray of Washington — kicked off the condemnations, releasing statements within minutes of one another around 11:30 a.m. yesterday.

The calls to resign snowballed in the following hours.

"While Senator Franken is entitled to have the Ethics Committee conclude its review, I believe it would be better for our country if he sent a clear message that any kind of mistreatment of women in our society isn’t acceptable by stepping aside to let someone else serve," Gillibrand wrote in a Facebook post.

"Enough is enough," she wrote. "The women who have come forward are brave and I believe them."

The national party joined in, with Democratic National Committee Chairman Tom Perez calling on Franken to vacate in a Twitter statement.

Prominent outliers include Virginia Sen. Tim Kaine (D), who said he spoke to Franken, offering his advice, but refused to comment further.

Known Franken ally Sen. Elizabeth Warren (D-Mass.) did not comment, but, according to a Boston Globe report, she called Franken yesterday and urged him to resign.

A Franken resignation would have far-reaching implications for state and local politics.

If Franken resigns, Gov. Mark Dayton (D) would pick his successor, who would then face an immediate election in the 2018 midterms. The winner of that race would serve the remainder of Franken’s term, with another election in 2020.

Two Senate races in two years is a daunting challenge.

"Part of what the governor has to be thinking is, ‘Who has enough financial legs to do this twice in two years?’" said Dave Schultz, political science professor at Hamline University in St. Paul. "That’s a lot of fundraising and name recognition capacity."

Several names have been floated as potentials, notably Reps. Keith Ellison and Betty McCollum. Both come from hard blue districts — so a nomination would not risk a precious House seat — and would win enthusiastic turnout in the Twin Cities, Minnesota’s Democratic stronghold.

But given the reason for the open seat, an Ellison pick seems unlikely, some say.

"It’s going to have to be a woman," Schultz said.

Another front-runner, Lt. Gov. Tina Smith, lacks the name recognition of the two House members but compensates in political heft. A power player in state politics, Smith was overwhelmingly expected to run for governor next year when Dayton is term-limited, but she declined this spring.

A dark-horse candidate is state House Minority Leader Melissa Hortman. She rocketed into public consciousness this spring when, during a House floor debate, she called on legislators to return to the chamber.

State Rep. Ilhan Omar (D) — a former refugee and the highest-ranking Somali-American politician in the U.S. — was presenting a bill on civil rights.

"I hate to break up the 100 percent white male card game in the retiring room," Hortman told the chamber, "but I think this is an important debate." The comment set off a firestorm of GOP condemnations, but Hortman refused to apologize.

Regardless of the pick, a Franken resignation would put another Democratic Senate seat in play, just as the party’s slim hopes for a majority surged in recent weeks.

Pickups are now considered possible in Arizona, Nevada and Alabama, but the party must retain all of its current seats to take the chamber.

The Minnesota race would up the number of seats the party must defend to a whopping 26, the largest number of exposed Senate seats for a party in one election since before World War II.

It’s true that Minnesota goes reliably blue in statewide and national races — both Senate and all statewide seats are held by Democrats — but the party quietly worries about the state.

In the 2016 elections, Republicans took both chambers of the state Legislature and Hillary Clinton won by less than 2 percentage points, a far thinner margin than expected. Clinton lost 19 counties that President Obama won in 2012.

Democratic success in the Land of 10,000 Lakes is historically due to an alliance of unions and agriculture interests that formed the bedrock of the state Democratic-Farmer-Labor Party.

This coalition made Minnesota a hotbed of prairie populism, producing politicians like the late Sen. Paul Wellstone. Many saw Franken, who openly admires Wellstone, as continuing this legacy.

But the farmer-labor bond has degraded in recent years as rural regions have shifted red. That change is particularly acute in the northeastern part of the state, known as the Iron Range.

Democrats once dominated the area, once the country’s most prolific producer of iron and taconite, thanks to strong mining unions.

But the economic downturn, coupled with clashes with Minnesota’s urban liberals over mining and environmental protection, helped the GOP break ground in the Iron Range.

Democrat Rep. Rick Nolan now holds the seat, but he won re-election in 2016 by less than a percentage point, and President Trump won the district by 15 points.

The shift creates a stark urban-rural divide, as Minneapolis and St. Paul have moved to the left. The metropolitan area is now among the most liberal in the nation, and the population is climbing.

"How fast are the Twin Cities growing? That’s the real issue," Schultz said. "The Democrats have a great strategy for how to win re-election in Minneapolis and St. Paul. They don’t have one for holding the Iron Range."

A chain reaction on the Hill?

The state’s other senator, Democrat Amy Klobuchar, is up for re-election, while the gubernatorial race will decide the direction of the state after eight years of staunch progressive politics under Dayton.

Popular and a tough campaigner, Klobuchar is considered a lock. Franken’s seat, though, could attract legitimate GOP attention if open.

A bill of Emmer’s to revive a massive, controversial mining project in Minnesota’s northern forests cleared the House last week.

Assuming Franken resigns, Sabato’s Crystal Ball from the University of Virginia Center for Politics would list the race as leaning Democrat.

Meanwhile, there is increased pressure on other lawmakers accused of sexual misconduct to vacate office.

Next up may be Nevada Rep. Ruben Kihuen (D). The first recipient of the Deferred Action for Childhood Arrivals program elected to Congress, Kihuen was a party favorite and rising star in a key swing seat.

On the GOP side, Rep. Joe Barton of Texas announced last week that he will retire, after it emerged that he had sent sexually explicit messages to a woman over Facebook.

Another Texas GOP lawmaker, Rep. Blake Farenthold, is under fire for settling a sexual harassment claim using $84,000 in taxpayer funds.

A Franken resignation could also prompt a Democratic shuffle on Senate committees.

A replacement senator could simply take Franken’s seat on his committee assignments, which include Energy and Natural Resources; Judiciary; Health, Education, Labor and Pensions; and Indian Affairs.

However, other Democratic senators could try to take one of those seats, a decision generally made by the Steering and Outreach Committee. Should they succeed, those senators may have to give up previous committee posts.

"This may cause a chain reaction involving a series of shifts of committee assignments," according to a 2006 Congressional Research Service report.