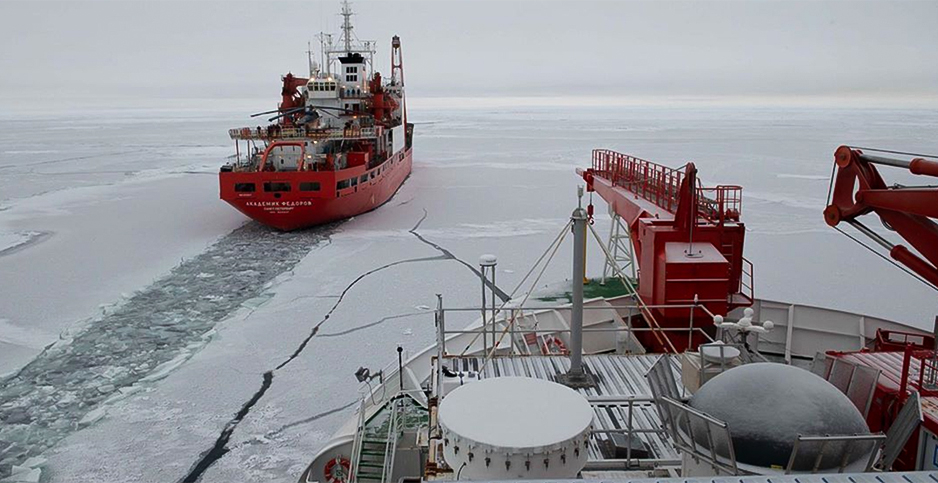 The Akademik Fedorov is seen maneuvering away from the Polarstern. mosaic_expedition/Instagram

Leaving the central Arctic is a special kind of bittersweet. For many travelers, there’s a good chance they’ll never visit again. And for those who do, the region could look dramatically different the next time they see it.

That’s because Arctic temperatures are rising at least twice as fast as the rest of the globe. And as the region warms, the sea ice that covers the Arctic Ocean is steadily melting away.

For now, there are large swaths of the central Arctic that remain frozen all year round. But as the thickest, oldest ice disappears and summer temperatures skyrocket, some scientists worry it won’t last forever. Recent research suggests that the Arctic could experience its first totally ice-free summer within a few decades.

Even winter ice cover is thinner and smaller than it was a few decades ago. And as long as greenhouse gas emissions warm the Earth’s climate, it will continue to shrink.

"It still feels impressive and positive and fascinating to be here and be able to witness this change," said Mauro Hermann, a doctoral student at ETH Zurich. "So it’s something big. I would call it … majestic. But, yeah, in a frightening way."

Hermann is one of the lucky few who’s seen the top of the world — and who may visit it again some day. For the past five weeks, he was on board the Russian research vessel the Akademik Fedorov as it cruised through the central Arctic. The ship was assisting a major international research mission known as the MOSAiC Expedition, focused on the complexities of the Arctic climate system.

For Hermann, it was impossible not to consider the consequences of climate change while sailing through one of the most rapidly changing regions of the world.

"I was thinking about it at least every day," he said.

He wasn’t the only one.

"This trip, it was more a sad feeling," said Nathan Kurtz, a MOSAiC participant and NASA researcher studying sea ice thickness. "Because I’d seen the ice so many times, but I haven’t seen it in freeze-up like this, and I just saw how thin it was. And I was like, wow, this is a big deal."

Kurtz has visited the Arctic sea ice about 10 times since his first trip in 2012. Thinking about climate change helps keep him motivated in his work, he said. But actually seeing the ice, especially as part of a major expedition like MOSAiC, is a stark reminder of how quickly the world is changing.

"People talk about these cruises like MOSAiC, they’re once in a generation, and it’s like, well, the next generation — this ice, it’s not going to be around like this," Kurtz said. "And so then I had the thought, too, I was like, if my kids ever came up here, they could never see this. When they’re my age, they probably won’t ever be able to see this."

It’s true that such large-scale Arctic expeditions only occur so often. The last yearlong mission was the SHEBA Expedition, or Surface Heat Budget of the Arctic Ocean, more than 20 years ago.

Tim Stanton, a MOSAiC participant and an oceanographer at the Naval Postgraduate School, was a researcher on the SHEBA Expedition. At the time, climate models had already predicted that the Arctic would be more sensitive to climate change than many other parts of the world.

"So there was an awareness," Stanton said. "But it wasn’t like, gosh, there’s lots of evidence of it at that point."

Fast-forward two decades, and the decline of Arctic sea ice is now clearly understood to be a long-term trend. In fact, the melting appears to be happening even faster than the models predicted. As a result, there’s a much stronger sense of urgency when it comes to climate science in the Arctic.

"So when MOSAiC came along, obviously that was front and center — that we have to better understand all the processes that contribute to this decrease in ice extent, and very importantly, the consequences of it," Stanton said.

For climate modeler Thomas Rackow, a postdoctoral researcher at the Alfred Wegener Institute in Germany, these dramatic declines felt much more immediate after he stepped onto the ice for the first time.

Rackow helped supervise the unloading of heavy scientific equipment from the Akademik Fedorov onto the sea ice during the expedition. He was surprised by how thin the floes were, even at the beginning of October — less than 3 feet thick in many places, and as thin as a foot or so in some of the places he was working.

"It became quite aware to me that 50 years ago this wouldn’t have been a problem to find ice a meter thick at this time of the year," he said. "So it’s already quite a different world. And this also means that in 50 years from now, this will be very, very different."

For some early career scientists, it’s the long-term consequences of melting sea ice — issues that they may see unfolding in their own lifetimes — that weigh most heavily while moving through the central Arctic.

"I worry more about encroaching human civilization," said Daniel Watkins, a doctoral student at Oregon State University who also joined the five-week stint on the Akademik Fedorov. As sea ice disappears, for instance, it’s likely that ship traffic through the Arctic will increase. And many experts are concerned that marine animals will suffer as a result.

"If you melt all the ice in the summer, and then it gets cooler again, ice will come back," he said. "If you kill all the belugas, they won’t come back."

For others, though, there’s also something intangibly sad about the changing Arctic for reasons that are difficult to pin down.

"I think what the hardest question is, that I still don’t know how to answer is: Why is it bad?" Hermann said. "What makes us feel sad about the Arctic shrinking is probably not in the first place the bigger implications — it’s also something else."

For his own part, he said, there’s a personal component: "I simply love snow."

For Rackow, it’s the concrete consequences that are most important to keep in mind — the ways the melting ice may affect Arctic communities or wildlife or global weather and climate patterns. But after visiting the region for the first time, he agrees there’s something inherently sad about the idea of losing it.

"Now that I’ve been on the ice, I’ve seen how it’s really a beautiful landscape," he said. "There were these calm and beautiful days where you had like this hourlong sunrise or sunset. This was really beautiful, and how this looked on the ice, as well."

If the ice disappears, he said, "you basically lose this one type of landscape, which you just have in the Arctic and the Antarctic. And if you don’t have that anymore, you just lose the variety of this planet, right? So it’s kind of sad."

On Oct. 28, the Akademik Fedorov returned to its launching point in the Arctic port city of Tromsø, Norway, carrying several dozen scientists, students, educators and journalists, including this reporter. As the ship chugged its way back from the central Arctic, MOSAiC participants gathered to talk about their perspectives on climate change and ways they could address it in their personal lives.

"We’re going to the Arctic to investigate a region which is most impacted by climate change — and do we care ourselves?" said Hermann, who organized the conversations. "I need this coherence somehow in my mind."

Hermann, along with a handful of other students on board the Akademik Fedorov, chose to take the train across Europe to Tromsø for the expedition’s launch at the end of September. He spends a lot of time thinking about ways to reduce his carbon footprint in his own work as a scientist — by traveling less, for instance, or by choosing less carbon-intensive forms of transportation.

Other young MOSAiC scientists are also thinking about the importance of their work as researchers and its relationship to the problem of climate change.

"Sometimes there’s a feeling that the most important thing is figuring out climate adaptation, which is not exactly what I’m doing," said Watkins. "Sometimes you wonder — would it be better if I was just thinking about better technology or working on social issues with climate change?"

But he’s realized that all the different parts of the puzzle are important, he said.

"You just need to accept that there are lots of people thinking about this and attacking it from different directions," Watkins said.

And for veteran scientists like Stanton, it’s encouraging to have early career scientists on board and to see them thinking about the way their work relates to the broader global issues presented by climate change.

"I just hope that the young scientists remain engaged and see this as an important problem and don’t get disheartened," he said. "Because it’s a rather dark future for the planet, I’m afraid, if we don’t do something about this. And this is literally the beginning of it."