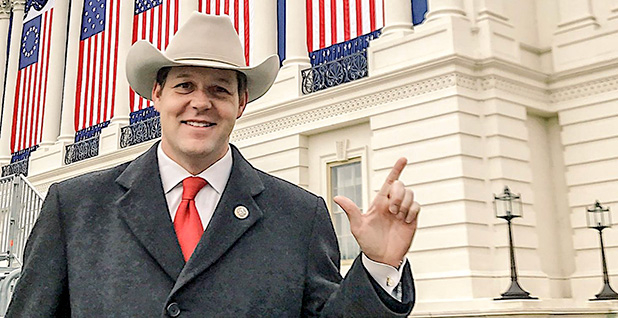 Freshman Rep. Jodey Arrington (R-Texas) in front of the Capitol on Inauguration Day. Photo courtesy of Arrington via Facebook.

Rep. Jodey Arrington (R-Texas)
may be new to Congress, but he’s no stranger to power.

While still in his 20s, Arrington went to work in the White House under President George W. Bush. He moved on to top posts with a banking regulatory agency and the Hurricane Katrina rebuilding effort before returning home to a plum job at his alma mater, Texas Tech University,
where he also headed a renewable energy institute.

It’s the kind of insider’s resume that might have been lethal in an election year when the Republican ticket was dominated by the ultimate political outsider. Arrington, telegenic and soft-spoken, instead rode it to victory over a crowded field jostling to replace retiring Rep. Randy Neugebauer (R)
in West Texas’ sprawling 19th District.

Overwhelmingly rural and larger than some states, the area ranks high in production of both cotton and wind power. In an interview, Arrington, who recently joined the House Agriculture Committee, spoke fervently of the need to restore federal subsidies for cotton growers in the next farm bill, mulled the potential for a congressional renewable energy caucus, and endorsed the use of government research money to promote wind generation.

In an institution lately known for unrelenting partisanship and short-term time horizons, Arrington also voiced a desire to reach across the aisle and eventually rise into the ranks of the House hierarchy. A leadership role, he said, would afford an opportunity to "be more than just one vote … for a rural America that has less of a voice in this process."

It’s a pragmatic, parochial view of Congress’ role that, for Southern lawmakers of a certain generation, was once a ticket to easy re-election. But there’s also evidence that Arrington, who has a degree in political science, knows that core Republican voters now expect more.

Last August, he journeyed hundreds of miles from his home turf for a tour of a Rio Grande border area that lasted until around 3:30 a.m., according to his office. The trip came at the invitation of Breitbart News Network,
the fiery right-wing outlet that focuses on immigration issues and had voiced doubts about Arrington’s ties to the Republican establishment and his commitment to the U.S. Border Patrol.

"I had seen him as the ‘Bush’ pick," Brandon Darby,
managing director of Breitbart Texas, wrote afterward in an account acknowledging that Arrington had proved him wrong. "Instead of the politician who was willing to do and say anything to get elected, I found Arrington to be a man of great character who honors his word and takes being elected by his fellow West Texans to heart."

The article featured a photo of Arrington holding a flotation device purportedly used by Los Zetas,
a feared Mexican crime cartel. In an email replying to questions from E&E News, Arrington spokeswoman Kate McBrayer
said her boss wanted a first-hand look at what Border Patrol agents deal with each day. Arrington is "a lifelong conservative," she added, whose "desire and willingness to work with less conservative colleagues should not be mistaken for a deviation from his firmly held pro-life, limited government, states’ rights and entitlement reform principles."

But Seth McKee,
a political scientist at Texas Tech, sees Arrington as more center-right than his district as a whole. "He’s going to have to deal with this over and over," McKee said.

Arrington, now a youthful-looking 44, contrasts sharply with Neugebauer, who retired rather than seek an eighth term. In 2013, for example, Neugebauer was caught on camera berating a National Park Service ranger for keeping the World War II Memorial
closed to veterans during a federal government shutdown provoked by congressional Republicans (Greenwire, Oct. 4, 2013).

"You could never imagine Jodey Arrington doing that," McKee said.

The son of a tractor salesman and a teacher, Arrington grew up in Plainview,
about 40 miles north of Lubbock,
the largest city in the district. His interest in politics sparked by a high school government class, he got a bachelor’s degree in political science and a master’s in public administration from Texas Tech. He then parlayed an internship into a job with then-Texas Gov. George W. Bush (R) as an adviser on appointments to state boards and commissions, according to his LinkedIn
profile. When Bush won the White House in 2000, Arrington followed him to Washington, where he handled a similar portfolio as associate director of presidential personnel.

In 2001, he became chief of staff at the Federal Deposit Insurance Corp.,
headed by another fellow Texan, Donald Powell.
After the Bush administration’s botched early response to Hurricane Katrina, Arrington was Powell’s deputy at the White House Office of Gulf Coast Rebuilding.

Arrington was "central" to negotiations that ended with the administration agreeing to an added $4 billion in housing aid for Louisiana, recalled Andy Kopplin,
who was then executive director of the Louisiana Recovery Authority
and had previously worked for then-Gov. Kathleen Blanco,
a Democrat.

"He was knowledgeable, he was effective, he got stuff done," Kopplin said.

Recruited by an ex-congressman

In 2007, Arrington returned to Texas Tech, where he eventually became vice chancellor for research, commercialization and federal relations at the Texas Tech University System.
Recruiting him was Kent Hance,
the system’s chancellor at the time and a former congressman who was looking for a way to link the school’s research work to the marketplace. Ironically, Hance had defeated Bush to win the 19th District congressional seat in 1978.

"He did a great job," Hance, now a lawyer and lobbyist, said in a recent interview. Arrington proved adept at wrangling grant money and served as president of the National Institute for Renewable Energy
(now known as Group NIRE),
according to his office and a financial disclosure report.

A 2012 news release features Arrington as touting the school’s work in developing new hydraulic fracturing techniques. But in the job, Arrington said in the interview, he was "at the tip of the spear" in promoting wind energy. With the help of millions of dollars in money from the state and other sources, the school became a nationally recognized center for wind turbine testing and certification, he said.

Arrington, who pegs himself in the "all of the above" camp for energy sources, also couches his support for wind power in local terms, calling it good for West Texas farmers and ranchers.

Group NIRE, a for-profit entity, is now attached to the Global Laboratory for Energy Asset Management and Manufacturing,
another Texas Tech organization whose website highlights its work on electric grid modernization.

Arrington’s interest in public office meanwhile remained keen. A window opened in 2014 when a state Senate seat unexpectedly became vacant, and just as quickly slammed shut when Arrington lost badly in a special election to an incumbent state representative looking to move up.

At that point, he had just joined the private sector as head of a health care company. However well-known Arrington thought he was because of his work at Texas Tech, the race served as a valuable primer on election basics, such as the need to raise money and get on television.

A second chance came surprisingly quickly when Neugebauer the next year took himself out of the running. In the nine-candidate GOP primary to replace him, Arrington ran a close second to get into a runoff with the then-mayor of Lubbock, Glen Robertson.
The race was acrimonious and was fought mainly on national issues like border security. While Robertson — who labeled Arrington a "career politician," — paid for his campaign largely out of his own pocket, Arrington relied on a conventional fundraising strategy to raise almost $1.6 million for the election cycle.

His Bush connections helped; the former president and his wife, Laura, together contributed $5,400. Confidants to the former president like Karl Rove
and former Education Secretary Margaret Spellings
also chipped in. When the returns were tallied last May, Arrington won 54 percent to 46 percent. Democrats didn’t bother fielding a contender; Arrington formally claimed the seat in November by rolling over token opposition from the Green and Libertarian parties.

Beside the Agriculture panel, he is on the Budget and Veterans’ Affairs committees. So far, he has shown himself to be a rank-and-file loyalist. He backed President Trump’s temporary ban on immigration from seven majority-Muslim nations (which has since been stayed by a federal appeals court) and signed onto a letter urging Trump to fire IRS Commissioner John Koskinen,
whom GOP lawmakers accused of misleading Congress.

But he is also moving his wife and three small children to Washington, D.C., a relatively daring action in an era when lawmakers fret about the perception that they’re out of touch with the home folks.

"This was a family decision, and it’s going to be a family journey and adventure," Arrington told The Texas Tribune.

He holds out hope of bipartisan cooperation on the farm bill and infrastructure legislation, with the onus on majority Republicans to reach out.

"I always try to come with the assumption that, regardless of party, the people who are there are there to make a difference, too," he said.