From Jane the Pain to the ‘Keystone Killer’ 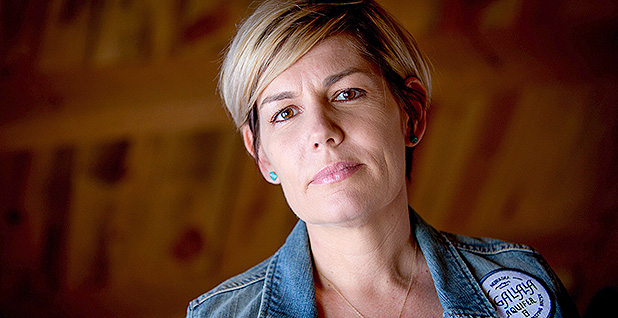 Before she was dubbed the "Keystone Killer" by Rolling Stone, environmentalist Jane Kleeb was called Midget, Janie or sometimes even Jane the Pain by her family.

The Floridian-turned-Nebraskan and founder of the advocacy group Bold Nebraska rocketed to national fame during greens’ battle against the Keystone XL oil sands pipeline, which she and her allies ultimately won.

Now she’s working to expand her group to other states as part of the Bold Alliance network, preparing to take over as chairwoman of the Nebraska Democratic Party and helping activists to fight other planned pipelines.

Kleeb recently chatted with E&E News about how she got into the Keystone XL fight, her love of Burger King chicken sandwiches and her three-legged Chihuahua named Taco.

Your last name, Kleeb, is pronounced "Klehb." How do you tell people to say it?

I say it’s Kleeb, rhymes with the Neb, which is my shorthand for Nebraska.

You’re originally from Florida, not Nebraska?

I grew up in Plantation, right outside of Fort Lauderdale. I lived in Florida until I was about 25. Then I moved to Philly and D.C. When I was working in D.C. as the head of the Young Democrats of America, that’s when I met my husband, Scott, who is a cattle rancher. As you can imagine, cattle ranchers do not like D.C.

Your mother was a prominent Florida Republican?

My mom was the head of the right-to-life movement in Florida growing up, and my dad owned a couple of Burger Kings with my grandmother. They were very active in the Chamber of Commerce. … I definitely grew up in a conservative household.

Do you feel nostalgic going to Burger King now, or can you not eat there?

I definitely still love it. I feel like I’m betraying my father if I drive through McDonald’s or Wendy’s.

What’s your favorite thing on the menu?

I definitely like the fried chicken sandwich, the old-school one.

Did you ever think you would be living in Nebraska?

No. And I think that people — especially like my friends in D.C. and Florida — were like, "Oh, my God, you’re going to live there for three years and then you’re going to force Scott to move to D.C." But I love it here, and we chose to live in a small, rural town. So we live in Hastings, which is like population 25,000.

What’s surprised you most about living there?

That it’s not just corn and cattle. That our small, rural towns have this huge progressive, independent streak that still to this day surprises me that the Democratic Party has not realized and tapped into. That really came to light through the Keystone fight — you saw how these small towns really punched above their weight and were like, "No, we actually don’t like big corporations. Whether you’re oil or ag, we don’t like when you come in here and try to tell us how to run our town."

How did you get involved in the Keystone fight?

I had never worked on an environmental issue before Keystone. … About three months after we started Bold [Nebraska], … I got a phone call from a rancher up in the Sandhills … saying, … "Did you know about this pipeline that’s going to cross the Sand Hills?" I was like, "No, how can they even build a pipeline in the Sandhills? That’s crazy." Then I got another call from another friend who worked at the National Wildlife Federation, same thing, like, "Have you heard about this? I know you care about the Sandhills." … That’s how it all got started.

You’d never done anything environmental before this?

Nothing, no. I definitely told my kids we have to recycle. But that was it, like literally. Never did anything. I wasn’t even a member of Sierra Club or anything.

Keystone was such a big fight for you. How did it feel when the pipeline was finally rejected?

When we started the fight, I had two kids; at the end of the fight, I had three. It was definitely this huge chunk of my life and half of my time in Nebraska. … Bill McKibben was actually the one who called me. It was very early in the morning on Nov. 6 — the anniversary is coming up. He said, "I’m about to board a plane, so I don’t have much time to talk, but I wanted you to know that Obama is rejecting the pipeline today." I still choke up thinking about it. I immediately started to cry. … You just realize that every moment I had spent away from my family, every moment I left at 8 a.m. and didn’t get back until 10 p.m. … all of that mattered.

What’s your next big fight?

We want to end eminent domain for private gain pipelines. That’s going to be our big fight and big focus over the next several years.

You were a Bernie Sanders supporter; how do you feel about Hillary Clinton’s energy policies?

She is obviously right there on the build-out of clean energy. I couldn’t agree more with her plan for that. But she and a lot of her advisers like Trevor Houser still are living in like 1990s, early 2000s science when it comes to fracked gas. It just has to change.

Are you concerned about a potential Clinton administration on that front?

I’m not concerned about it. I think we are so loud. The environmental movement is now so loud and really diverse. … This climate movement is very strong, so if we see things going in the wrong direction, we’re going to be in the streets pushing.

Are you supporting Clinton?

Do you have pets?

I have a little three-legged Chihuahua whose name is Taco, and she was gifted to me by a rancher during the Keystone fight that got left on his doorstep. … She came with that name. She runs really, really fast for having three legs.

My mom calls me Midget — I was the baby of the family for eight years, and then my little brother came along. My family all calls me Janie, but that’s it. Unless they were mad at me, then it was Jane the Pain.