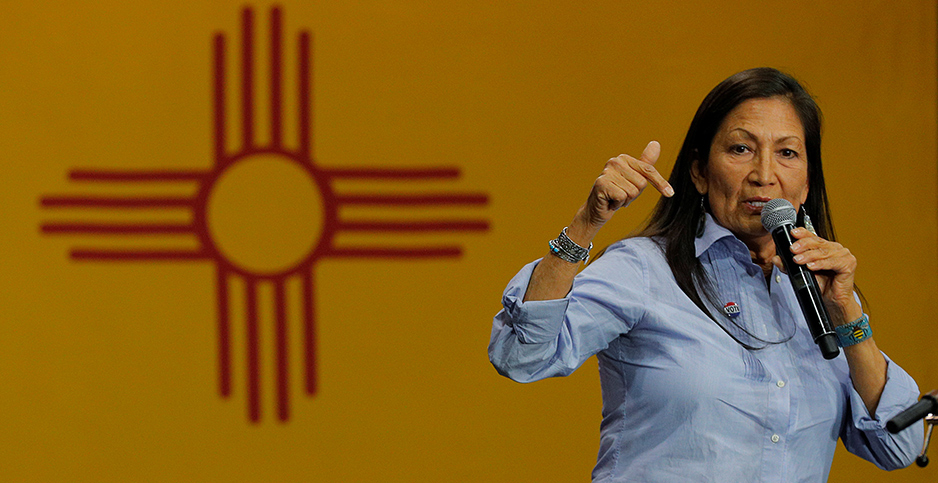 Two years later, Haaland is widely considered a shoo-in as she seeks a second term in her state’s 1st District, and she is poised to make history yet again, leading the way for New Mexico as the state prepares to elect its first all-woman House delegation.

Atkeson said Haaland, the former chair of the state’s Democratic Party from 2015 to 2017, has big advantages in a district that has turned overwhelmingly blue, including more campaign cash than her Republican challenger and a long history as a community organizer.

"She’s very connected and has paid her dues, those are the things that got her to where she is," said Atkeson.

In a speech at the Democratic National Convention in August, Haaland called herself "a symbol of our resilience as the embodiment of America’s progress as a nation," telling the story of how her ancestors migrated to the Rio Grande Valley in the late 1200s to escape droughts.

She’s eager to move up the ladder in 2021, vying to become vice chair of the House Democratic Caucus, the party’s No. 6 leadership position (E&E Daily, Oct. 6).

And she’s even getting mentioned as a possible candidate to become secretary of the Interior if former Vice President Joe Biden, the Democratic presidential nominee, wins on Nov. 3 (Greenwire, Oct. 9).

She continued: "I love Natural Resources, I love the chairman, I love the people I serve with, I love the issues that come before our committee. And I’ll be anxious to see who else comes on our committee, too, because I think we’ll have a lot of new members come Jan. 3."

Haaland serves on Biden’s climate engagement advisory council. She is a co-sponsor of the Green New Deal and has been an outspoken advocate for the legislation, saying it would move the nation from "an economy built on exploitation and fossil fuels to one driven by dignified work and clean energy."

She has a broad environmental portfolio that includes teaming up with New Mexico Democratic Sen. Tom Udall as the lead sponsor of the "30 by 30 Resolution to Save Nature," which would set a national goal of protecting 30% of the nation’s lands and waters by 2030 (E&E Daily, Sept. 15).

She’s working with Sen. Cory Booker (D-N.J.) on a bill, H.R. 8271, that would clean up pollution and ban the granting of permits for major air source pollutants in vulnerable communities.

On other issues, Haaland this year pushed for an investigation of the U.S. Park Police’s use of force in dispersing a crowd of largely peaceful protesters outside the White House on June 1 (E&E Daily, June 10).

Haaland has backed bills to support migrants in detention centers, same-day voter registration, better health care for older LGBTQ Americans, quicker access to Medicaid and the Children’s Health Insurance Program for immigrants living in the country illegally, and protections for transgender women who are being detained by federal authorities.

‘Support that they need’

Her GOP challenger, Michelle Garcia Holmes, is making crime the top issue in her campaign. In an appearance earlier this month on New Mexico’s KOB 4, she said Haaland is "dangerous and radical" for not doing enough to make the district safer.

"That’s the elephant in the room," said Garcia Holmes, the retired chief of staff for the New Mexico attorney general’s office who also served 20 years with the Albuquerque Police Department.

Haaland said she was able to get the law changed, guaranteeing that tribal members would pay in-state tuition regardless of their residency. But the change didn’t apply to her since it wasn’t retroactive.

She had to borrow more money, but she’s hoping to get one of her student loans paid off soon. "One of them is being whittled down a little bit," she said.

"I wanted folks to realize that addiction is an important issue for me," Haaland said. "That’s something that we need to solve as a society, and we’ve seen that time and again, right? … I’ve been very fortunate to have the love and support of my family and community."

She’s also hoping the federal government will be there to provide others with the same kind of support she received.

"Look, I would have never gotten through college if it weren’t for Pell Grants, thanks to the federal government," Haaland said.

"I feel like I’ve been supported. And if somebody wants to go to college, I want them to have the support that they need."