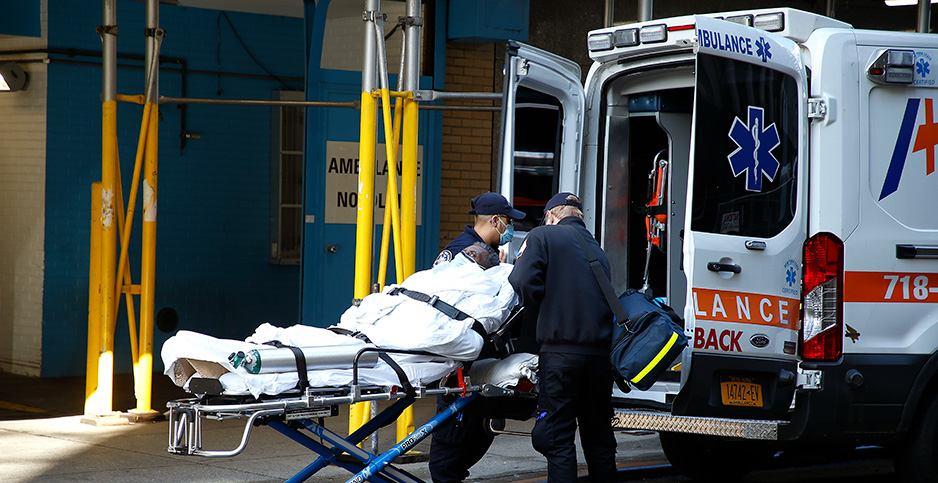 Emergency technicians transfer a COVID-19 patient from Mount Sinai Morningside hospital into an ambulance amid bed shortages in New York City health facilities. Activists and analysts say that front-line communities, including those in New York City, are disproportionately threatened by global catastrophes like climate change and the coronavirus pandemic. John Lamparski/Sopa Images/Sipa/Newscom

The novel coronavirus pandemic has underscored the outsize threat that global catastrophes such as climate change pose to the poor and communities of color, say activists and analysts.

What’s also worrisome, they say, is that the COVID-19 outbreak demonstrates how these catastrophes can work in tandem to make conditions exponentially worse for vulnerable communities.

"Similar to climate change, COVID-19 is proving to be a threat multiplier," said Jalisa Gilmore from the New York City Environmental Justice Alliance. "It’s exacerbating existing inequalities, and we’re seeing that low-income communities and communities of color are being disproportionately affected."

In New York, for example, Brooklyn and the Bronx have borne the brunt of cases and deaths — with more than 60,000 of the city’s nearly 142,000 cases. These outbreaks are also concentrated in predominantly black and Latino ZIP codes grappling with some of the city’s highest asthma, pollution and poverty rates.

Similarly, in Louisiana, black people make up 70% of COVID-19 deaths, despite constituting just 33% of the state’s population.

Many of those Louisiana cases are concentrated in what’s known as "Cancer Alley," a stretch of predominantly black rural communities dotted with petrochemical plants.

Experts like University of Maryland environmental health professor Sacoby Wilson say policymakers haven’t done enough to protect populations that are already on the front lines of climate change. He noted that the risks associated with burning fossil fuels are a big part of why black, brown, indigenous and low-income populations are dying the fastest from COVID-19.

"Any parts of the country where you have bad air quality that intersects with lack of access to health care, limited economic resources, those places are going to have individuals who are … more at risk from morbidity associated with COVID-19," Wilson said.

Minority and low-income neighborhoods have been historically located near some of the country’s worst polluters and greenhouse gas emitters like waste transfer stations, Superfund sites and major highways.

It comes as no surprise to public health experts that those areas are also COVID-19 hot spots.

Columbia University health professor Terry McGovern is familiar with compound risk factors, having provided legal aid on the front lines of the HIV/AIDS epidemic — which killed millions of people by leaving their immune systems vulnerable to secondary illnesses like the flu.

From the onset of the pandemic, the Centers for Disease Control and Prevention made it clear that underlying health conditions made COVID-19 infections even deadlier.

And new research out of the Harvard University T.H. Chan School of Public Health revealed earlier this month that exposure to higher rates of air pollution is linked to increased COVID-19 death by 15% in some cases.

One pandemic hot spot, the South Bronx, is home to some of the nation’s highest asthma rates. The Mott Haven neighborhood — sometimes called "Asthma Alley" — is inundated with diesel transport trucks from the resident FreshDirect warehouse and The Wall Street Journal printing press.

McGovern added that secondary disease "is completely interconnected with environmental justice and poor environmental health outcomes" among marginalized populations at the center of some of the worst polluted areas of the country.

While some research offers hope that warm weather could blunt the virus’s spread, environmental advocates see a hidden threat in summer weather.

Intense heat waves — made worse by rising global temperatures — could squeeze marginalized communities trying to get out from under the weight of the pandemic, say experts like Christian Braneon, an engineer and urban climate expert.

With summertime electricity blackouts on the horizon, Braneon said, COVID-19 hot spots with a prevalence of underlying health conditions could be left without lifesaving conveniences like air conditioning.

This pandemic "is happening while the climate is still changing and there’s still a strong likelihood we can have heat waves this summer, which would increase hospitalizations and increase death rates," Braneon said.

Research from the American Council for an Energy Efficient Economy shows that Northeastern cities have a large number of low-income communities with disproportionately high energy bills. Put another way, impoverished populations in COVID-19 hot spots like Pittsburgh; New York; and Hartford, Conn., have to spend more of their paychecks every month to keep the air conditioning running.

And studies show these same populations often are concentrated in urban heat islands — metropolitan areas that warm up faster because of less green space and unevenly distributed infrastructure.

A study published this year in the journal Climate looked at the prevalence of extreme heat in 108 American cities and found that historically segregated areas were the hottest parts of town in 94% of those cities — sometimes clocking in at 7 degrees higher than other neighborhoods.

Those numbers track with cities such as Baltimore, where a joint NPR and University of Maryland investigation revealed that low-income neighborhoods could face temperatures almost 10 degrees higher than wealthier areas.

Braneon also worries that certain climate lifelines may not be as readily available during a pandemic. Facilities such as brick-and-mortar cooling centers may have to adjust their procedures to avoid virus transmission that would come from people moving into and out of facilities.

Gilmore, of the New York City Environmental Justice Alliance, noted that COVID-19 deaths and heatstroke deaths share a pattern. In both cases, many people end up dying alone in their homes, so hospitals cannot report accurate death tolls from either crisis.

"This shows that we need to make sure in general, with this stuff like this, we’re counting the amount of people who are actually dying because we need to understand the actual disparities and where we need the support to go where the support is needed," she said.

Public health experts said they would consider these rollbacks a concern under normal circumstances. In the era of the coronavirus, the University of Maryland’s Wilson said deregulation could further widen the divide between the haves and the have-nots.