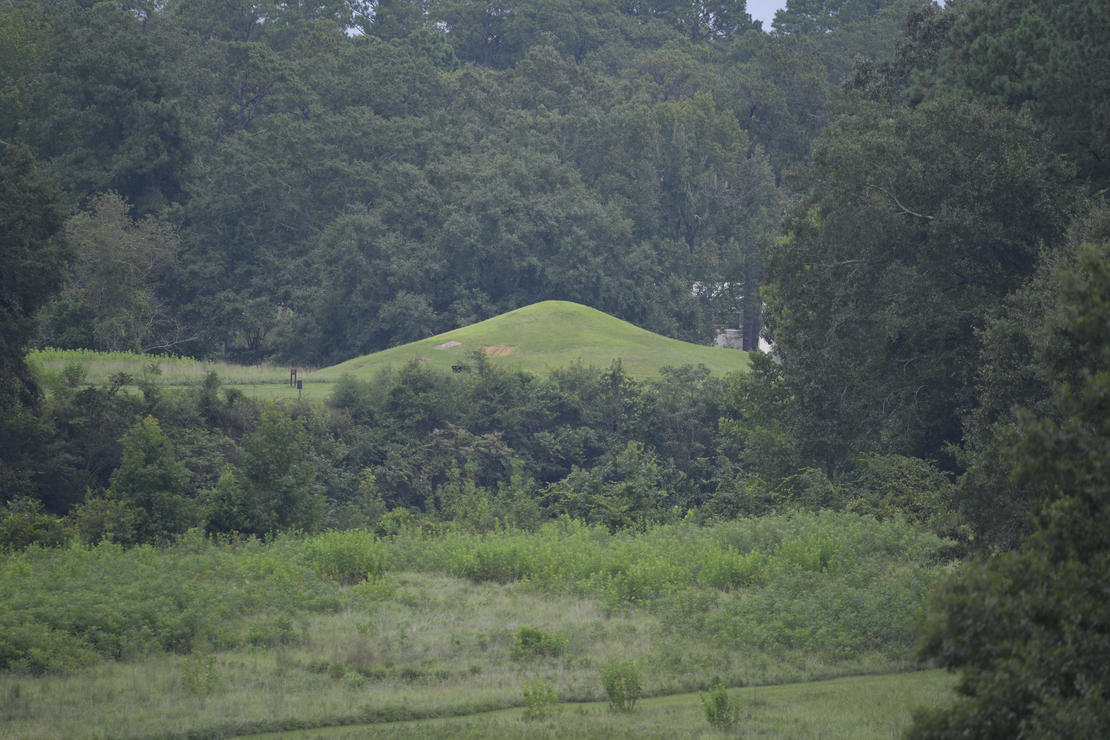 The remains of a funeral mound at the Ocmulgee Mounds National Historical Park in Macon, Ga., on Aug. 22, 2022. Sharon Johnson/AP Photo

Seth Clark predicts that his home state of Georgia will finally make history in 2023, winning approval of its very first national park.

“I do believe that the 64th national park will be created within a year in middle Georgia,” said Clark, the mayor pro-tem of Macon-Bibb County and the executive director of the Ocmulgee National Park and Preserve Initiative.

If approved, the long-awaited plan could expand and elevate the Ocmulgee Mounds National Historical Park to the top tier of the sites run by the National Park Service, raising the profile of a location considered sacred to Native Americans.

But whether the site ever gets redesignated as a national park and preserve could depend on the outcome of a study by NPS, which has already missed a three-year deadline to complete its work.

It’s one of at least 28 studies on the NPS work list, evidence of a backlog that’s producing plenty of frustration for park backers in Georgia.

Clark said he and other proponents have been waiting since early 2019, when Congress ordered the study on the Ocmulgee River Corridor, a project that could also add 50 river miles to the park site.

But he said they now question the value of waiting any longer, knowing that even with backing from NPS and Interior Secretary Deb Haaland, Congress would still get the final say anyway.

“Lots of waiting,” Clark said. “We haven’t heard anything new on the study, and I expect that to be pretty stagnant for some time. Apparently these things get super-logjammed in the Solicitor’s Office, which is where it is now.”

He said he’s now hoping that Georgia lawmakers — Reps. Sanford Bishop (D) and Austin Scott (R) and the state’s two Democratic senators, Raphael Warnock and Jon Ossoff — will soon introduce legislation that would result in Congress creating the park without waiting for NPS to complete its study,

One of the other studies that Congress ordered in 2019 could end up preserving the childhood home of former President George W. Bush in Midland, Texas, by making it a new NPS site.

But like the Georgia review, that study is now also overdue, and NPS would not say when its work might be finished on either proposal.

“George W. Bush and Ocmulgee are both in progress,” Jenny Anzelmo-Sarles, the NPS chief of public affairs, said in a recent email.

She also declined to comment on the status or timing of any of the other studies.

NPS disclosed the backlog in September at a hearing before the Senate Energy and Natural Resources Subcommittee on National Parks, when senators considered a bill that called for a study on a proposed national heritage area in Hawaii.

Michael Caldwell, the agency’s associate director of park planning, facilities and lands, said NPS backed the legislation but told the panel that the agency already had 21 other studies that had been approved by Congress but not yet completed.

Congress ignored the warning and ordered a study on the Hawaii site in December. It was one of 11 new studies that Congress mandated before adjourning for the year.

Those studies include four that could create new national park sites in California, Tennessee, Ohio and Colorado. Three other studies will focus on proposed new national heritage areas, while two will examine new national trails, and another two will explore new wild and scenic river designations.

Initially, the NPS communications office would not identify the outstanding studies referenced by Caldwell in his testimony. E&E News then filed a Freedom of Information Act request for the information, receiving it in a response from the agency last November.

NPS said in response to the request that it had conducted “a foreseeable harm analysis” and concluded that releasing the list of incompleted studies would not hurt any interests protected by FOIA's exemptions or be prohibited under federal law.

The response showed the agency struggling to keep pace with the demands made by Congress.

When NPS released the list in November, it said the number of pending studies had declined to 19 in the previous two months with the completion of two studies: one that looked at Cold War sites as possible new national historic landmarks and another on Camp Amache, a former incarceration facility in Colorado that held Japanese Americans during World War II.

The agency said it sent the Camp Amache study to Congress on Oct. 13. That came nearly seven months after President Joe Biden had already signed the Amache National Historic Site Act into law on March 18, approving legislation that passed both the House and Senate in February (Greenwire, March 21, 2022).

The list also included studies on Mississippi civil rights sites, which NPS completed in December, and another on the proposed New Philadelphia National Historic Site in Barry, Ill., which Congress approved as part of its year-end spending bill (Greenwire, Dec. 23, 2022).

That vote made New Philadelphia the 424th NPS site, commemorating the first town founded and registered by a Black American in 1836 (Greenwire, Dec. 21, 2022).

'We've got a lot riding on this'

While NPS has remained mum on the cause of its backlog, the delays have been a long-standing concern for the agency.

In a report to Congress last year, the Congressional Research Service said the delays had been caused “due to the large number of studies authorized by Congress and the extent of available resources.”

CRS said that each study had cost an average of $350,000 and was expected to be done within three fiscal years. But the report added that “in practice studies have taken longer to prepare."

Clark said that elevating the historical park to a full-blown national park would help boost tourism in the Macon region and honor the Muskogean people who once occupied the land before being forced off and who could end up co-managing the site.

Even if NPS doesn’t complete its study anytime soon, Clark said he’s still expecting to make a trip to Washington this year for a congressional hearing on the park proposal.

“It will most certainly happen,” he said.

Local officials got a chance to press their case with their congressmen last Friday during a flag-raising event in Macon, when they unveiled a flag of the Muscogee (Creek) Nation will now fly in front of City Hall to acknowledge Macon-Bibb’s growing partnership with the tribe that is now based in Oklahoma.

With both Bishop and Scott in the audience, Macon-Bibb Mayor Lester Miller reminded the crowd that “should our friends in Congress act,” the country’s 64th national park would soon be coming to Georgia.

“I say that without any pressure, but we’ve got a lot riding on this,” he said.

NPS has a work list of at least 28 studies that have been ordered by Congress in recent years. The list includes proposals that could result in new national park sites or designations for new national heritage areas, national trails, or wild and scenic rivers. Congress added the last 11 studies on the list in December.

The site would commemorate race riots that took place in Illinois in 1908 and led to the founding of the NAACP.

The site would commemorate a deadly gunfight in downtown Matewan in 1920 that’s remembered as one of the most famous events of the West Virginia mine wars.

The 51-mile trail from Galveston to Houston would honor the route taken by some of the last slaves during their walk to freedom on June 19, 1865.

A designation would recognize the distinctive landscape and historic, cultural and natural resources of the Finger Lakes region.

The site would commemorate locations linked to the 1657 signing of the Flushing Remonstrance, a document recognized as the forerunner of religious freedom in the United States.

The site would commemorate the military history of Fort Ontario, which became a shelter for European refugees during World War II.

The site would honor the Texas boyhood home of the nation’s 43rd president.

The study would determine ways to commemorate and interpret locations along the Transcontinental Railroad.

The site would honor the Tennessee home of the nation’s 11th president, who lived there from 1819 until 1824.

The designation would honor sites linked to philanthropist Julius Rosenwald and the network of schools he created for Black children in the South in the early 1900s.

41 counties in southern and eastern Kentucky

The designation would recognize the distinctive landscape and historic, cultural and natural resources of 41 counties in southern and eastern Kentucky.

The site would designate a national park at Ocmulgee Mounds and honor the national significance of the Ocmulgee River Corridor in Georgia, an area of 50 river miles extending from Macon to Hawkinsville.

The designation would commemorate a 2,700-mile route from Missouri to Louisiana by Zebulon Pike in 1806 when he explored land obtained by the U.S. in the Louisiana Purchase.

The site would honor the nation’s oldest surviving railroad station in an urban setting, which President Abraham Lincoln secretly passed through on the way to his first inauguration to avoid an assassination plot.

Island of Rota, Commonwealth of the Northern Mariana Islands

The designation would recognize the national significance of the island of Rota, including its prehistoric and historic resources and limestone forests.

The trail, which the study would examine being redesignated or extended, commemorates the 54-mile route taken by civil rights protesters in the Voting Rights March of 1965.

The designation would honor the site of the elementary school attended by the late Supreme Court Justice Thurgood Marshall.

The study would examine a possible new park at the Ohio home of John Parker, a former slave who helped hundreds of other enslaved people find freedom by making his property a stop on the Underground Railroad in the 1800s.

The study would consider a new park at the Dearfield Homestead, Colorado’s largest Black homesteading settlement.

The study would examine lynching sites within approximately 100 miles of Memphis as a possible new national park.

The study would examine making a park of new portions of the California coast in the Los Angeles area.

The study would explore the possible designation of the 1,400-mile Buckeye Trail in Ohio as a new national scenic trail.

The study would assess the possibility of creating the first national heritage area in Hawaii on the west end of O'ahu.

The study would examine whether the swamp between Norfolk, Va., and Elizabeth City, N.C., should be designated as a national heritage area.

The study would assess the possibility of designating areas within the island of Guam as a national heritage area.

The study would examine the possibility of designating the Alaska Long Trail, extending roughly 500 miles from Seward to Fairbanks, as a national scenic trail.

The study would assess the possibility of designating the Little Manatee River in Florida as a scenic waterway.

The study would focus on the possibility of making the Kissimmee River in Florida part of the national wild and scenic rivers system.